What do Ukraine and Thailand have in common? Replica of Alexander Privalov 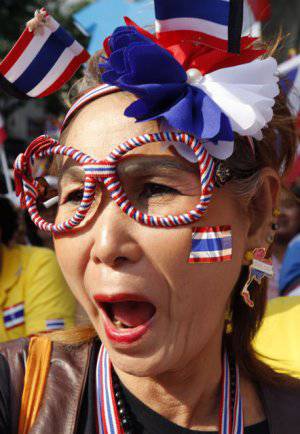 In the stream News almost next to two news. One says that late on Monday, President of Ukraine Yanukovych announced that he did not exclude the possibility of early parliamentary and presidential elections, that is, full satisfaction of all the demands of the Maidan opposition. Other news does not look so catchy. The Ministry of Foreign Affairs of the Russian Federation once again warns fellow citizens from traveling to Bangkok. Like, they flew to the airport there - and immediately for a transfer, to resorts, but you don’t need to go to the city: it’s not safe there. So: both of these news, which in appearance do not resemble each other, are lines from the same tale. And it is even known from which: the king has a court, in the yard - a stake, on a stake - bast, start over.


The fact is that in Thailand just this weekend, the next extraordinary elections took place, and in Ukraine they, it seems, are just yet to come. In Thailand, it is already clear that they did not suit anyone and they did not stop the confrontation, while in Ukraine they all pretend that they don’t understand how hopeless these next extraordinary ones are.

First about Thailand. So, on Sunday there were elections. The opposition considered them illegal, and therefore boycotted and tried to disrupt - not everywhere only by peaceful means. The Central Election Commission recognized that the voting took place only on 89 percent of all polling stations, while according to the laws of the country the new parliament takes over its powers only when 95 percent of its deputies are elected. On this basis, the opposition leader Suthep Thyaksuban announced his supporters of victory - after all, it was their blockade that ensured the absence of a quorum in parliament to open a new session and elect a government.

But the current government also calls the past vote its victory, as I quote Prime Minister Yinglak Chinawatra, the people of the country "defended their right to a democratic choice, showing the whole world that the people of Thailand want to live in a country with a democratic system." The meaning of this phrase is that the local opposition does not hesitate to loudly propose a “temporary” retreat from modern democratic norms - right up to the moment when the entire electorate, as one of the leaders of the protest puts it, “is educated enough to think for itself”. In short, the confrontation did not complete the election.

Now about Ukraine. What is happening there is a real misfortune. God is with them, with Yanukovych and Yatsenyuk - foam is all. The point is that, on the whole globe, apart from, it seems, the two or three most missing under-states in Africa, Ukraine is the only country whose economy is smaller than it was twenty years ago, that is, immediately after the collapse of the Union. At the beginning of a new century, the country began to revive: statistics showed double-digit growth rates. But then the first maidan happened - and with growth it was finished. So far, for nine years (the first Maidan was in 2004), but judging by the readiness of Yanukovych to go on about Maidan again, to call national elections again, and in the coming years there’s nothing to expect for a better thing.

According to recent polls, the presidential rating of Yanukovych is actually equal to the Klitschko rating. Undiscovered, I would say, hard support by the West, Klitschko, led to the fact that in early elections he will have more chances to win. So Ukraine, quite possibly, will see that which until now was considered improbable: the president is even weaker than the one brought to power by the first Maidan Yushchenko.

Yushchenko, for all his farcical helplessness, had a fair amount of managerial experience at the national level. The boxer Klitschko, pushed to power by the second Maidan, has no experience whatsoever, and he will still show Ukraine the sky in diamonds.

But most importantly, I repeat, not in personalities. If only Yanukovych, even Klitschko, even though both were real Bismarcks, would not have become better. Within the boundaries that Stalin drew and Khrushchev rounded out due to party and hardware considerations, an independent state cannot exist. Naturally: after all, such borders were drawn, in particular, so that the Ukrainian Soviet Socialist Republic would not take it on itself to head on its own.

And look, what our neighbors came to the present moment. No president will be adopted by the south-east of Ukraine, if he will support, for example, Bandera. And no president will be adopted by the west of Ukraine if he doesn’t support these Banderovites. And after all, it is so in everything: in terms of language, and in morals, and in faith, there are two nations and two countries.

It is clear that I would very much like to somehow avoid a split by some miracle, but it is not very clear where such a miracle will come from. In the meantime, the announcement: the next extraordinary ones are approaching. Get ready, neighbors.