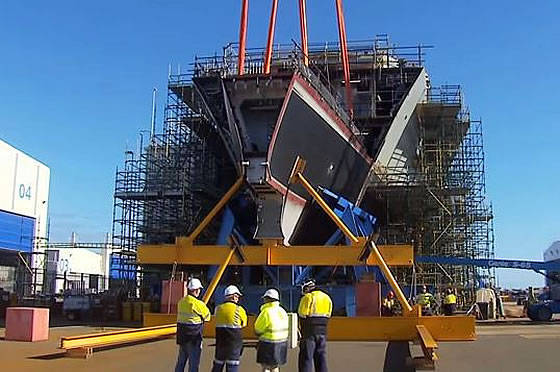 The Alliance AWD Consortium announced 3 February in Adelaide, Australia, the groundbreaking ceremony for the keel of the Brisbane Hobart class destroyer.


Brisbane is the second of three Hobart-class destroyers ordered for the Australian Navy.

As TSAMTO previously reported, the Australian government signed 2007 of the year with AWD Alliance, including ASC, Raytheon Ostralia and the MoD’s Arms and Logistics Organization (DMO), a contract worth around 8 billion Australian dollars (6,7 billion US dollars) for the construction of Hobart class destroyers, created on the basis of the F-100 destroyer project of the Spanish company Navantia.

ASC is the main contractor for the construction of the destroyers Hobart, Brisbane and Sydney, which is carried out in a modular fashion. The blocks are manufactured at shipyards in Adelaide (ASC), Melbourne (“BAE Systems”), Newcastle (“Forgax”) and Ferrol (“Navantia”). Three additional sonar units will be built in Spain and the UK.

After the assembly phase is complete, the destroyers will be launched and will undergo a series of sea trials.

The keel laying ceremony for the first AWD destroyer took place at ASC’s Adelaide facility in early September 2012. It is planned that it will be launched in the coming months. One of the following key points for the destroyer "Hobart" will be the activation of the combat system after its tests on ground-based facilities.