Yanukovych made a strong move 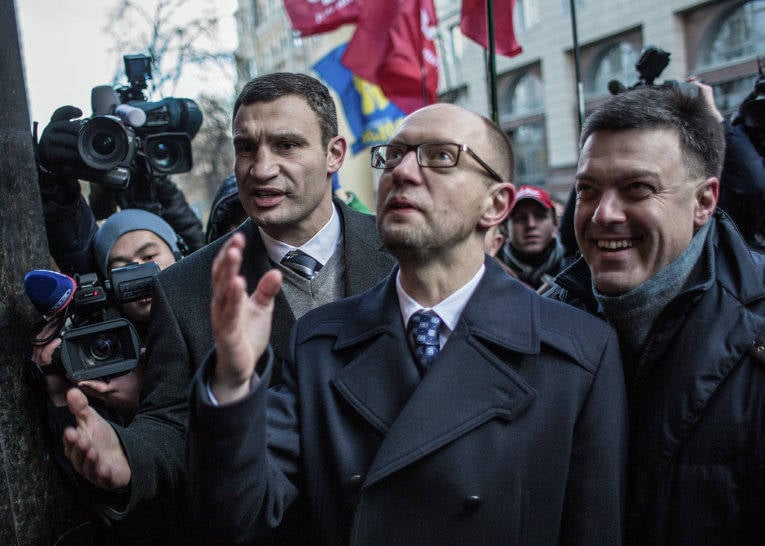 “The president said that if“ we are here, politicians, now we cannot agree, then the only democratic way to resolve the situation is early elections, ”said Viktor Yanukovych’s representative in the Verkhovna Rada, Yuri Miroshnichenko.

The opposition demanded early parliamentary and presidential elections, and now it can get them, but something is not heard of its cheers. What's the matter? In that all three of her heads, in different ways, bluffed, and now the game is revealed. And it becomes clear how she can get the next move mate.

“Euromaidan”, despite the propaganda of “friendly media”, sobered Ukraine, as most independent political analysts predicted. According to the latest data from Socis, today 19,8% of voters would vote for Yanukovych, the second is Klitschko with 19,1%. This is a convincing gap, and he achieved at the peak of protest speeches.

That is, today, the majority of the people of Ukraine do not support the “euromaidan”, no matter what the pro-Western media lied about this chance to win the election from Yanukovich. The second important consequence of the “euromaidan” was the consolidation of the south-east of Ukraine in the fight against the neo-Nazi Bandera “pro-European” movement, and the creation of the Ukrainian front. It is clear that according to the orange scenario, the opposition does not recognize the election results in its favor, but their tears in the situation created in Ukraine will not change anything.

However, the victory of Yanukovych in the elections is possible on one condition: if he enlists the support of the Ukrainian Front, created in the south-east of the country, but uniting all the anti-fascist forces in Ukraine. To do this, he needs to announce in his election program that if he wins in Ukraine, all neo-Nazi parties and organizations will be banned.

The whole “svolot” of Ukraine, of course, will vehemently oppose such an election program. However, even without that, it will still be ardently opposed to Yanukovych, she’s already cursing him with the last words. Another thing is important here: our dear European Union will have to swallow this bitter pill, no matter how much he wants it. And Yanukovych will be able to recoup a little for all his humiliations after Vilnius.

Having legalized the neo-Nazi Freedom party at one time, the Ukrainian authorities made a big mistake. Now is not the time to remember who did it and why. But ... such mistakes are made in "Europe", and then corrected. In Greece, the neo-Nazi party Golden Dawn was banned recently, so in Ukraine such a political decision cannot be approved by European politicians if they don’t want to lose face.

Especially as Europe begins to become sobering, according to German ex-chancellor Gerhard Schroeder, Europe does not have the right to make Ukraine a choice: “If we had negotiated the association with Ukraine and Russia at the same time, the situation would have looked very different.

And even the “best enemy” of Russia Zbigniew Brzezinski believes that “the EU should negotiate with Russia ... The EU and the Russian Federation must find a formula according to which Ukraine (its European integration) is not a threat to Russia's economic interests.” And for Russia, the participation of neo-Nazis in power in Ukraine is unacceptable.

There are many complaints to Yanukovych today, they are fair, but also politically motivated. And what is the president in the world without sin? All are sinful, though in different ways. The thing is different, that today other real candidates for this post in Ukraine are not at all better. And, it is very likely that they will have a lot worse, - this is what is always a pre-election dilemma. To choose the power always has not the best, but the lesser evil.

Ctrl Enter
Noticed oshЫbku Highlight text and press. Ctrl + Enter
We are
Results of the week. "This is not for you ..."Ex-boxer V. Klitschko throws out "white towel"
Military Reviewin Yandex News
Military Reviewin Google News
285 comments
Information
Dear reader, to leave comments on the publication, you must sign in.