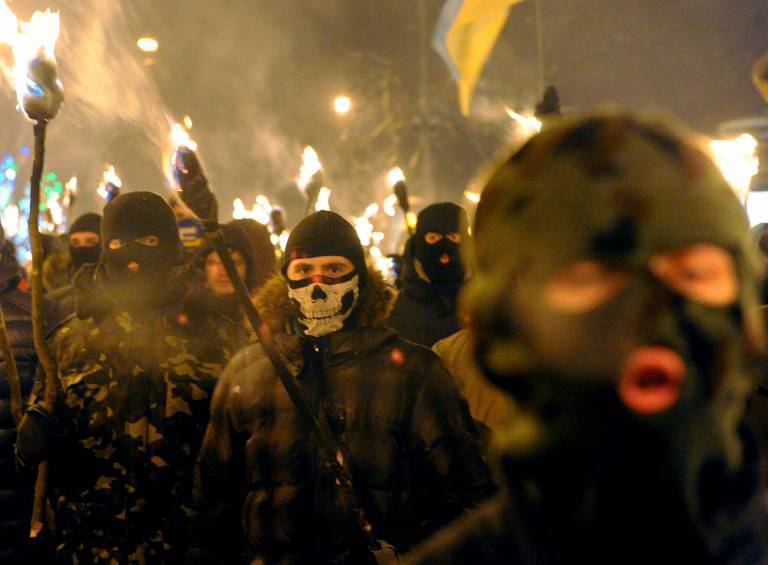 [From the first day of Euromaidan, every leader of the active resistance group received a cash reward.

Law enforcement agencies of Ukraine have established customers for the murder of Euromaidan activists, and also identified schemes and sources of funding for the escalation of street confrontation aimed at the violent overthrow of power. This, on condition of anonymity, said an informed source from the Security Service of Ukraine.

According to the source, from the first days of military confrontation, law enforcement officers took into the development the organization “Right Sector”. This organization was formed as a result of an internal conflict between the Social-National Assembly and the radically-minded All-Ukrainian Union “Trident” named after S. Bandera. In the course of the investigation, it was established that these organizations are funded by a number of various Western “pro-Ukrainian organizations” created by the secret services of the NATO countries back in Soviet times.

The source reports that these “charity” organizations from the very beginning of “Euromaidan” began to create a closed focal point, attracting experienced Western analysts specializing in developing strategies for “color revolutions”. They were assigned the task of formulating a strategy for the actions of combat groups. During the investigative measures, it was established that this particular center gave the command to kill activists during a military confrontation on Grushevskogo street. The death of people was supposed to provoke an escalation of the conflict and set the furious mob on the police.

From the first day of Euromaidan, each leader of the active resistance group received a cash reward. For each active fighter - $ 200 per day and additionally $ 500, if the group was more than 10 individuals. Coordinators received from $ 2000 for each day of mass riots, provided that the controlled group of militants performs direct attacking actions on law enforcement officers.

The investigation also established that the funds were received by the US embassy in Kiev through the diplomatic channel. In turn, the US Embassy forwarded money to the central offices of VO Svoboda and VO Batkivshchyna. The amount was about $ 20 million per week. Further, these funds were allocated for the support of Euromaidan (the functioning of the life support system, bribes and bribery of individual officials, law enforcement officers, media payments, campaigning expenses, etc.), as well as daily payments to active militants. In turn, the leaders of the opposition forces and radical groups received non-cash money for their personal bank accounts.

This is evidenced by a search conducted by the SBU in the premises of the central headquarters of Batkivshchyna. As you know, during the operational event, law enforcement officers withdrew $ 17 million from cash in the office of Oleksandr Turchynov. In addition, the party’s servers seized by the SBU officers contained information regarding the distribution of funds to pay for the livelihoods of Maidan and for conducting settlements with militants from the Right Sector and other radical groups.

It was also established that the leaders of right-wing structures of the United States guaranteed assistance in emergency evacuation from the territory of Ukraine in the event of a revolution failure, the provision of housing and facilities in any EU country to choose from. And these guarantees have already been taken advantage of by the leader of the political group of provocateurs of the so-called Avtomaidan, Sergei Koba. At the moment, Ukrainian law enforcement officers specify its exact location, said the source of the SBU.

According to the information that is available in open sources, the mobilization of radically minded individuals to participate in the January 19 riots was carried out through the social network “V kontakte”, on the page “Right Sector”

In order to be credible and create the image of “ideological popular protest,” the radicals asked the population to provide them with financial assistance.

During the last 10 days, non-cash funds were credited to the specified account using the Privat24 system, mainly from the cities of Ternopil and Kiev, with sums of 50, 100, 500 hryvnias. The money also comes from supporters of the “Right Sector” both from Ukraine and from abroad (France, the Czech Republic and other countries).

Public sources also published personal data of all leaders and activists of radical groups who take part in street riots in Kiev and other cities. Let's name some of them:

Vasily Zinovievich Abramov: nickname “Yel”, twice convicted, chairman of the Galitsky district organization of VO “Trizub”, born in 13.01.1985, resident of the village of Zadnistryansk, Galitsky district, Ivano-Frankivsk region, one of the coordinators of the “Right Sector”.

Koziubchik Andrei Mikhailovich: the nickname “Orest”, an activist of the Ivano-Frankivsk organization of the VO “Trizub”, born in 03.08.1981, is registered in Kryvyi Rih, Dnipropetrovsk region, on ul. Sunday, 45 / 15, actually resides in Ivano-Frankivsk, unemployed, higher education, single, confidant of the leadership of the VO "Trident", professes the ideas of neo-Nazism, 17.08.2012, the year was delayed for inflicting serious bodily harm.