February 5 2014
19
In the past 2013, the domestic defense industry continued to fulfill the tasks assigned to it by the State Arms Program. Various enterprises continued to develop new weapons and equipment, and also carried out a state defense order for the production of existing models. In addition, several types of new equipment were adopted. So, Omsk OJSC Design Bureau of Transport Engineering, part of the Uralvagonzavod Corporation, created four types of engineering equipment accepted for supply last year. According to the press service of Uralvagonzavod, in the near future, the PTS-4 floating conveyor, the MMK mechanized bridge complex, the PDP and tank MTU-90M bridges.


Since 2002, KBTM has been the leading enterprise for the development of engineering equipment for the armed forces. This enterprise is responsible for the formation of the concept of the corresponding machines and the further creation of new projects. According to this system, several engineering engineering projects were created. A number of developed machines designed for engineering units, has been successfully tested and is being built in series. Last year, the list of developments of KBTM, adopted for the supply of the armed forces, was replenished with four new machines.

The floating tracked carrier PTS-4 "Duplo" continues the line of domestic transport vehicles. The development of this transporter began in the middle of the last decade, and the prototype was shown to the general public already in 2007 year. In 2011, a new transport vehicle passed state tests and preparations began for the start of its serial construction and acceptance for supply. The floating conveyor PTS-4, as well as the previous equipment of the family, is intended for transportation of various equipment, people and goods. The machine can perform various transport tasks, but the main one is the transportation of goods through water barriers. 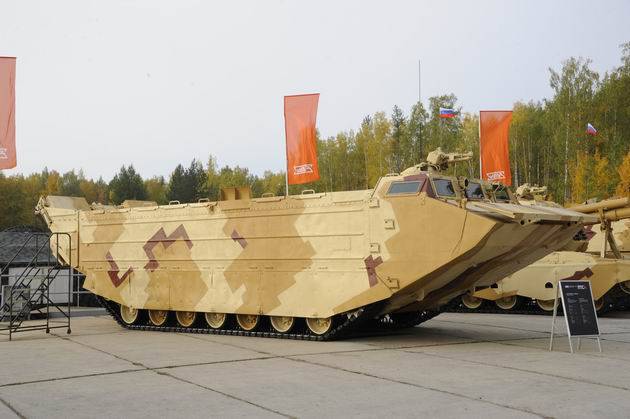 PTS-4 transporter was designed with extensive use of the design elements of the previous PTS-3 machine. In addition, its design uses some units borrowed from the T-80 and T-72 tanks. A conveyor weighing more than 33 tons is equipped with a multi-fuel hp 840 diesel engine. On a cargo platform with a length of 8,2 meters and a width of 3,3 m, you can place up to 18 tons of cargo. This allows you to transport people, cars, artillery or light armored vehicles. Maximum carrying capacity is achieved when driving through water. When transporting cargo by land, the payload is reduced to 12 tons. On the highway, the PTS-4 transporter can accelerate to 60 km / h. The maximum speed on the water, thanks to the use of two jet propulsion, reaches 15 km / h. The fuel range on land exceeds 580 kilometers, on water - up to 10,6 hours. The crew of two people for self-defense can use a heavy machine gun mounted on a closed installation. 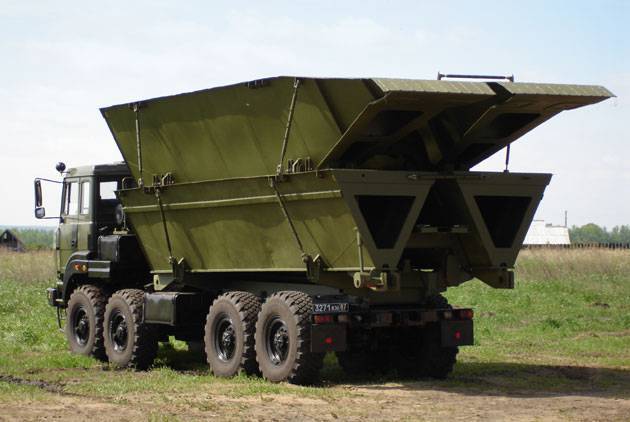 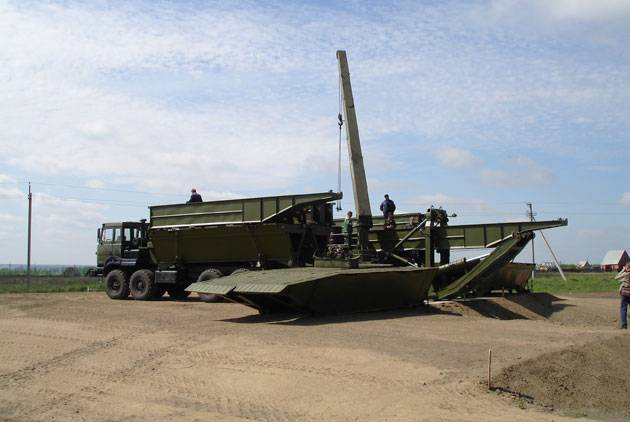 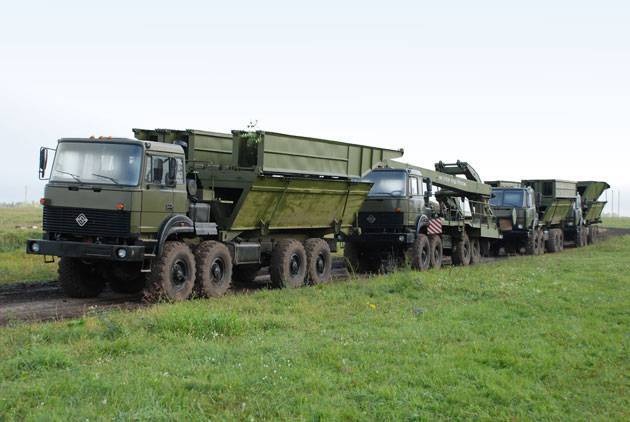 The MMK mechanized bridge complex was designed to improve the capabilities of the engineering troops. Previous constructions of mechanized bridges (ТММ-3 or ТММ-6) make it possible to quickly build a crossing up to several tens of meters in length, but need additional supports, which imposes restrictions on the depth of the obstacle to be overcome. The goal of the MMK project was to create a single-span bridge that allows you to create crossings up to 40 meters in any place. As shown by the calculations of Omsk designers, such a length of the bridge is sufficient to overcome 87-97% of obstacles encountered on the way of the troops.

The MMK complex consists of several machines with special equipment. The complex consists of two bridge assemblies and six transport vehicles made on the basis of the four-axle chassis “Ural 532361-1012”, as well as the bridge itself of modular design. The bridge is assembled from nine sections of the beam and nine bridge blocks. After the complex arrives at the point of crossing, calculations for bridge assembling machines equipped with cranes and winches unload the elements of the bridge from transport vehicles. Next is the assembly of the main element of the bridge - inductance beam. The beam is installed on the barrier, after which bridge blocks are mounted on it. For 70-90 minutes, the complex can build a bridge up to 40 meters long and at least 4 meters wide. Depending on the width of the barrier, the calculation can assemble a bridge with a length from 16 to 40 meters. A tracked vehicle weighing up to 15 tons or a wheeled vehicle with a pressure of no more than 20 tons per axle can move along the bridge of the MMK complex at a speed of no more than 60-15 km / h. When driving speed is limited to 5 km / h, vehicles weighing up to 80 tons can use the bridge. Bridge capacity is up to 400 machines per hour. 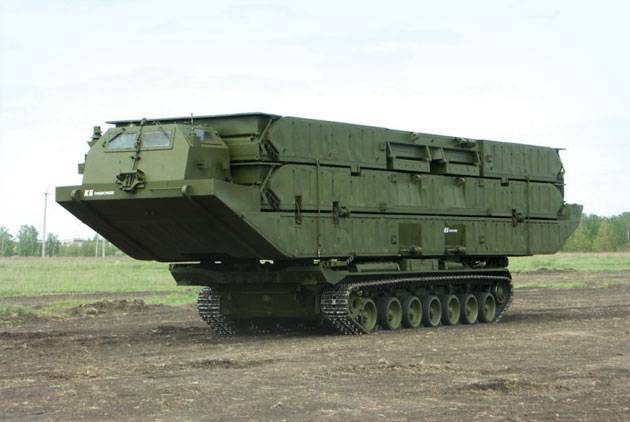 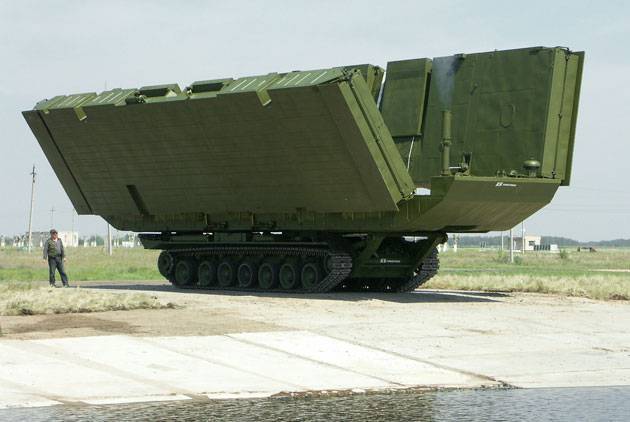 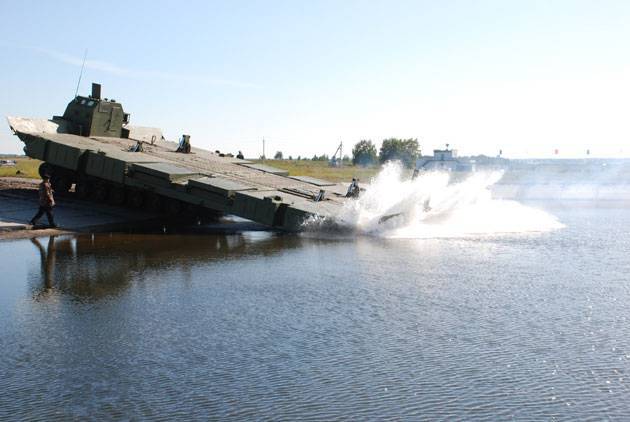 Forwarding ferry PDP is designed to provide ferry crossings of various vehicles. The PDP complex consists of two parts: a low-power caterpillar conveyor created using tank assemblies and aggregates, as well as the ferry itself. The steam PDP is a three-section design that unfolds before launching into the water. When folded, the steam with a total weight of 29,5 tons fits into the transverse dimensions of the conveyor. In unfolded steam has a length of 16,5 meter and a width of 10,3 m.

The ferry PDP is delivered to the water barrier using a tracked carrier. Before launching the side pontoons are unfolded and fixed. While on the water, the DAP can take on cargo with a total weight of up to 60 tons. However, its sediment does not exceed 650 mm. For movement on water, the ferry has an 330 horsepower engine. and propeller. The power plant is located in the stern of the ferry, and on the nose there is a crew cabin consisting of two people. Without a load, the PDP steam can move at speeds up to 12 km / h. At full load, the maximum speed drops to 10 km / h. Fuel reserve allows you to work up to 10 hours without refueling. The PDP complex can perform its tasks at a flow rate up to 2,5 m / s and an excitement of up to two points. If necessary, the PDL ferry can be docked with links of pontoon punk PP-91. 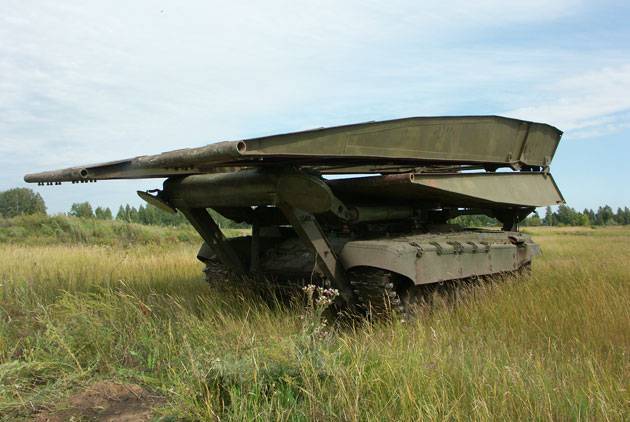 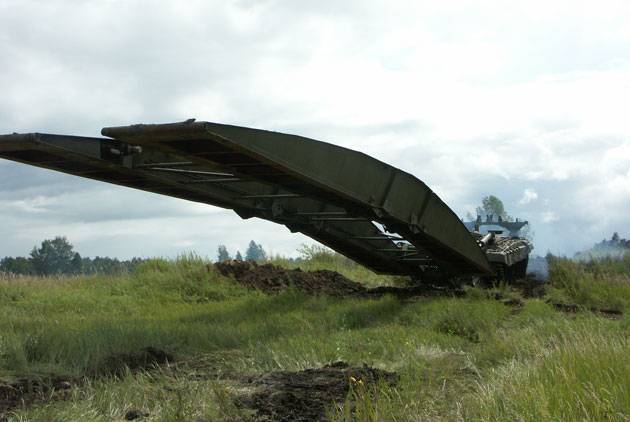 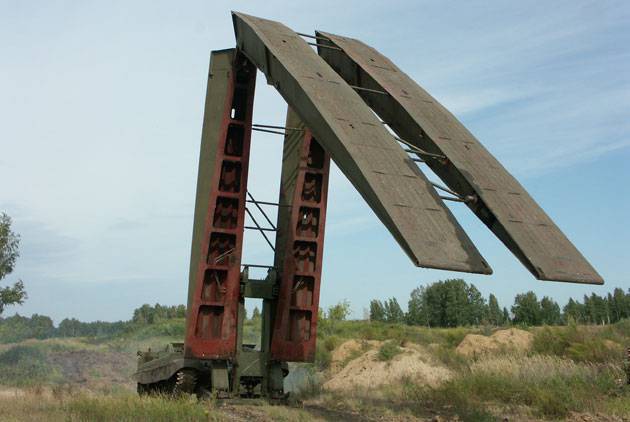 The bridge-laying tank universal MTU-90М, which appeared at the end of the two thousandth, is an option for the further development of the MTU-90 serial machine. The basis for the MTU-90М was the main tank T-90, from which, with some modifications, the chassis was borrowed. During the modernization, some elements of the bridge construction and the bridge were changed, but their principle of operation remained the same. As before, the bridge layer must go to the barrier, spread out the bridge, which consists of three sections, and lay it on top of the obstacle to be overcome.

The three-section bridge of the MTU-90М complex allows overcoming various obstacles with a width of up to 19 meters. It is noteworthy that the complex MTU-90 provided a crossing over obstacles up to 24 meters in width. A reduction in the width of the obstacle to be overcome was compensated for by an increase in the strength of the bridge. Thus, the improved design allows the passage of vehicles weighing up to 60 tons against 50 tons in MTU-90. An interesting feature of the bridge complex MTU-90М steel plates, covering the space between the beams. Thanks to this, not only tracked or wheeled combat vehicles can move along the bridge, but also vehicles of various classes. Such an innovation allows to significantly expand the scope of application of the MTU-90M bridge laying machine. For example, now he can fully participate in rescue operations.

The engineering vehicles described above, adopted for the supply of the armed forces last year, can perform tasks not only of a military nature. During last year’s flood in the Far East, PTS-3 floating conveyors were actively used for the transport of civilian cargo and the evacuation of the affected population. In addition to transporters, other types of engineering equipment was used in rescue operations. Thus, the new machines created by Omsk KBTM may be needed not only for military operations or exercises, but also for various rescue operations.

The press service of the corporation "Uralvagonzavod" in the official press release on the adoption of the supply of new engineering equipment, quoted the general director of JSC "Design Bureau of Transport Engineering" I. Lobova. He believes that the adoption of new technology for the supply of the armed forces suggests that it is possible to deploy its mass production. This means that in the foreseeable future, the Ministry of Defense and the relevant defense enterprises may sign contracts for the supply of new equipment of all four types.