February 4 2014
8
According to sources in the defense industry of Ukraine in the article "The main events of the military-technical cooperation of Ukraine in 2013", published in the sixth issue of the journal "Arms Export" for 2013, Ukrspetsexport is negotiating with Colombia and Peru for sale these countries parties modernized tanks T-64 out of stock.


This is confirmed by the statement of the Director General of the state enterprise Ukroboronservis (included in the Ukroboronprom group of companies) Sergey Mikityuk, published in December 2013, that his company "plans to launch a marketing campaign to promote the T-64 tanks to the world market." Mykytyuk said that “now the enterprise has carried out the relevant preparatory measures for the formation of foreign customers' interest in purchasing T-64 tanks ... The implementation of the T-64 project should open a new page in stories as "Ukroboronservis", and in general, "Ukroboronprom". There is confidence in the success of this product, which surpasses many analogues in the "price-quality" criterion.

So far, the T-64 tank has not been shipped abroad (outside the USSR / CIS / Ukraine) - with the exception of unconfirmed information about the sale of approximately 10 T-64B tanks to the Angolan opposition movement UNITA at the beginning of the 2000s by Ukrainian "special exporters".

There is an assumption that the beginning of attempts by Ukrainian “special exporters” to export T-64 tanks from availability is due to the actual exhaustion of Ukraine’s stocks of T-72 tanks that can be sold abroad — primarily, by suitable engines. Perhaps the latter circumstance was also the reason for the sale of T-72 tanks to Ethiopia, upgraded according to the T-72UA1 variant with the re-equipment of Kharkov 5TDFMA-1 diesel engines.

The possibility of concluding contracts for the sale of T-64 tanks (including those mentioned by Colombia and Peru), however, raises the most serious doubts. 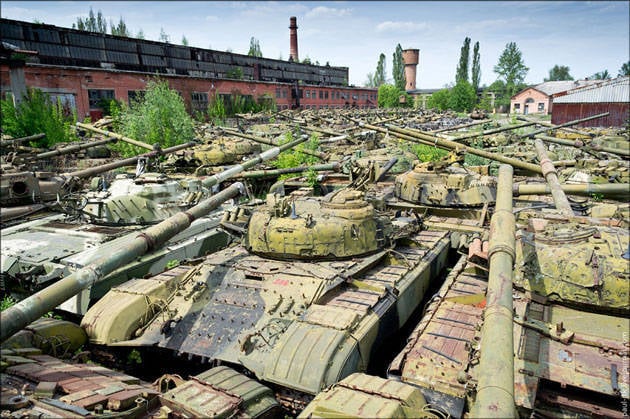 A collection of decommissioned T-64 tanks on the territory of the Kharkov Armored Repair Plant. June 2012 of the year (c) www.ridus.ru

Ctrl Enter
Noticed oshЫbku Highlight text and press. Ctrl + Enter
We are
"Ukroboronservis" modernizes air defense system in the interests of the Ministry of Defense and foreign customers"Ukroboronservis" is preparing to bring to the international market the tank T-64
Military Reviewin Yandex News
Military Reviewin Google News
8 comments
Information
Dear reader, to leave comments on the publication, you must sign in.