President of the Blue and Tolerant

February 5 2014
30
French President Hollande became famous for fulfilling two of his election promises: by signing the law on gays and expropriating income taxation. By “equalizing” LGBT rights with the rights of the majority, Francois Hollande (certainly not just equaling his American patron Obama, but wishing to get ahead of him) reaches, obviously, absolute tolerance, but through the introduction of the next draconian tax, tries to reduce the budget deficit, which looks ridiculous . And if we consider that in the first version, the tax law violated the constitution, the question of the competence of Hollande and his advisers can not even be raised.


At the end of December 2013, the French Constitutional Council recognized the tax in the amount of 75% from salaries in excess of one million euros per year. The tax is removed from companies, not from these happy workers. In the same 2013 year, the same Constitutional Council considered the previous draft of the team of Hollande, according to which the employee had to pay tax inconsistent with the constitution of the republic.

There are no distinct explanations for the draconian tax and cannot be. Rich people migrate en masse from France. Examples are known to all. In J. Depardieu already Russian passport. At the same time, the popularity of Marine Le Pen, leader of the National Front, is growing in France. This woman has long characterized Hollande as a conductor of European Government interests. And this is true: it is the supranational rulers in the EU who are forcing countries to reduce the budget deficit by cutting wages, raising taxes, reducing working personnel and other “tough” measures that bring the economic crisis to social. It seems that the EU project is a transatlantic plan to destroy the independence of European nations. It should be noted that this plan, if it existed, worked successfully. The most suitable time was chosen for the loss of national identity: the corporations have already turned half of the peoples of the world into a stupid consuming biomass, similar to the American one living among TV serials. It can be assumed that corporations, and, consequently, the US government, are thus getting rid of Western Europe as an economic competitor, and at the same time annoy the rival China, in which the EU is one of the main consumers of consumer goods. We can also recall the New World Order, which supposedly financial and industrial tycoons are building - or rather, they are planning to build on the ruins of the old world. And without debris - no way. Any "new order" in the world assumed the destruction "to the ground" of the order of the previous one. N. M. P.'s hypothesis suggests the extinction of a significant part of earthlings: there are too many of them!

That is why various restrictions were invented in the European Union. On budget deficit, on inflation, on unemployment. In fact, monitoring compliance with economic standards is a way of "legitimate" strangulation of peoples. Not all the draconian measures that the presidential team prescribes in the laws, but the people and enterprises, which, by the way, fill the budget, will hit not the king Hollande and his entourage.

The French government is trying to reduce the budget deficit. At the end of last year, the “shortage” amounted to 4,1% of GDP, and in 2014, Hollander wants to reduce it by 0,5 by a percentage point, reduce it to 3,6%. It is stated that to achieve such a goal, budget expenditures will be reduced by 15 billion euros and taxes will be raised. In addition to the draconian tax in 75%, Hollande is known for doubling the “additional” tax on the income of companies whose annual income exceeds 250 million euros. In fact, there is an “expropriation of the expropriators”. Only here Hollande, though a socialist, but rules a developed capitalist country. And he does not meet with compatriots.

As a result, the same Depardieu, who changed citizenship, opens enterprises not in France, but in Belgium. And in Russia is going to “stir up” the business. That is, these will be jobs in Russia and Belgium, and not in France. And taxes will also go to the relevant budgets.

The logic of Hollande, who is ready to promote laws that are contrary to the constitution, cannot be explained with one concern about the country's budget. So the popularity of Marine Le Pen, which is against the European Union and advocates for national identity, is growing. And Hollande is a president with a record low rating.

He also deserved a low rating with his law on "blue".

Last Sunday, over 500 thousand people took part in a demonstration against same-sex marriage in the French capital. According to the police, significantly fewer Parisians took part in the march - only 80 thousands. However, such discrepancies in the estimates have already become familiar. We only know the exact number of gendarmes who looked after the demonstrators - 1500 people.

Not only against the law "Marriage for all" protesters marched. People do not like the fact that government officials in France are pushing another “progressive” innovation today: they are going to explain to children at school that the difference between a boy and a girl is not. Full, so to speak, equality. The experiment is called accordingly: “The Alphabet of Equality”. 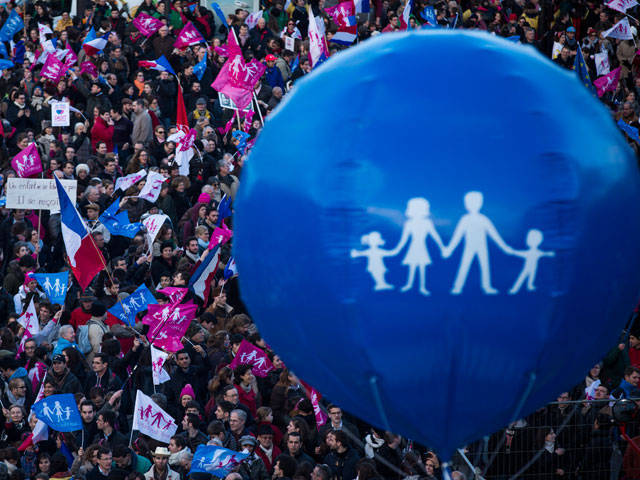 The organizers and participants of the protests are unanimous: France is full of problems, economic and social, unemployment is rising, society is boiling, and F. Hollande does not just fulfill his election promises, but fulfills only those with which you can divert the attention of the people from the pressing problems. It turns out that the protests of the population are even advantageous for Hollande: the "blue" people are confronted with the champions of the traditional family, that is, the "internal enemy" is busy fighting with his opponent.

However, the low rating of Hollande tells us that this ancient strategy does not work. Hollande leads two relatively victorious "war" with the so-called external enemies - Islamist terrorists, for some reason they are not impressed by the "victory" in Mali and the CAR of the French. Probably, because the president stuck himself to Africa at the call of the corporations (“Areva”, for example, is interested in uranium), and not at the call of duty.

Parisians are not only against same-sex marriage and the adoption of same-sex couples of children.

A week earlier, tens of thousands of protesters gathered on “Day of Wrath” in Bastille Square, thereby declaring protest against the policy of Hollande and the tyranny of oligarchic parties. Hollande’s team at the rally was called a “gang,” and the mildest epithet the president received from demonstrators was “incompetent.” The police could not stand such statements. The demonstration in Paris was broken up and 262 people were arrested, who were immediately accused of "armed assembly".

Well what can I say? Total democracy. When there is a protest against the blue - it is please. But do not touch the policy of the president, it does not concern you, dear citizens.

Interestingly, in parallel with the forceful and rather harsh suppression of protests in their own country, the French government gives democratic recommendations to Ukraine - “forgetting” or “not knowing” that the protesters in Kiev are not just rally, but they kill policemen with knives. The French authorities advised the Ukrainian government to support Mr. Klitschko and stop the violence.

American President B.H. Obama said recently that he supported the Ukrainian people in their desire to protest peacefully: "We support the fact that everyone has the right to freely express his opinion and state his position on the future of the country." He explained that the riots and rallies on the streets of Ukrainian cities speak about the development of democratic freedoms. Obama compared Ukraine with Myanmar and Tunisia.

He should have been compared with Tunisia and France. Why did Obama not call Hollande and did not explain to him that the riots and rallies on the streets of French cities are talking about the development of democratic freedoms? Why did not he demand that fighters for democracy, which the court now (may well be) solder several years in prison, be released from police stations?

By the way, the new Tunisian constitution has equalized man and woman. Amazing. There remains a small step to tolerance in schools and kindergartens. There is no difference between a boy and a girl, because Democratic Tunisia!

Ctrl Enter
Noticed oshЫbku Highlight text and press. Ctrl + Enter
We are
Results of the week. “You can legally go. It is difficult to reachWhat is behind the Russian and world propaganda of LGBT?
Military Reviewin Yandex News
Military Reviewin Google News
30 comments
Information
Dear reader, to leave comments on the publication, you must sign in.