The legacy of Mikhail Kalashnikov. Innovative weapon becomes the need of time 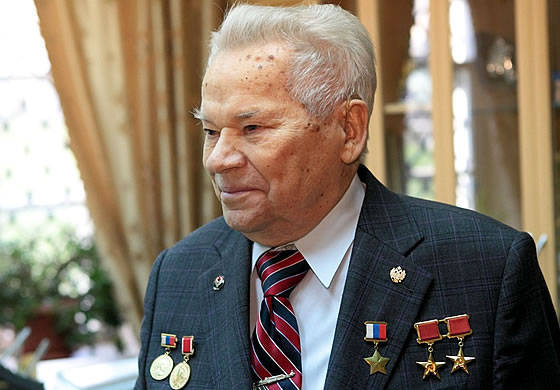 Russia suffered an irreparable loss. Great has passed away weapons thinker and patriot Mikhail Kalashnikov. In the memory of generations, he remains the designer of the world's best automatic small arms.


The spiritual stimulus that uncovered the talent of a scientist who rationally united a group of like-minded people was the idea of ​​fair retribution over the enemy. "What is important for the infantryman?" To be able to respond to a dense enemy fire with an even denser fire ”- this goal, set by Mikhail Kalashnikov, determined the content of his entire creative activity. When a journalist asked which of his automata he considered the best, the author of AK-47 answered: “And I came up with only one, but good. The remaining modifications are like the Lord God, united in different faces. The first car turned out to be reliable, like the “seven” of the Queen, they still fly to space in space ”.

Note, the author of AK-47 did not design, did not create, but invented a new product, embodied it in metal by intense mental work, talent, inspiration and imagination. Thus, it became the center of an innovation system based on three principles: more reliably, cheaper and more convenient to use - conditions for achieving arbitrarily unique weapon performance characteristics.

Criticism of innovation in weapons is broken down on the well-known formula: “Everything ingenious is simple, but not everything simple is ingenious.” The attempt of the American journalist Hugh Martin in the article “The Killing Machine” (Esquire, 1997) to defame AK-47 was an advertisement and a compliment to the designer’s talent, eliminated unnecessary evidence of the independence of the weapon’s effectiveness from its value - an objective criterion for evaluating the product’s innovative level. Hugh Martin writes: “The Kalashnikov assault rifle is the most affordable weapon that is made of sheet metal by stamping and welding, with large tolerances. In other words, it is done roughly ... Since even the oldest AKs rarely refuse to shoot, because any boy in Zaire, Cambodia or Liberia can disassemble them, they retain their combat value no matter how much they cost. In short, they continue to kill. According to the laws of the market, AKs fly to where chaos reigns, like a bee swarm behind nectar. ”

The intellectual feat of Mikhail Kalashnikov and Sergey Korolev, other domestic scientists, engineers and workers remains in the shadow of the spiritless "hectare of iron" of their creations, called the final product of production. The adoption of the AK-1947 in the year, and the X-NUMX years through the P-10 ICBM, with its help to the orbit of the first satellite of the Earth was not only a sectoral scientific and technical achievement, but also a breakthrough in the cognitive activity of a person who applied its laws and technologies for getting new knowledge.

In his memoirs, Mikhail Kalashnikov spoke with offense “about the thoughtless extravagance with which our leadership distributed to the right and left technical documentation on the types of weapons we developed. How much we have lost and continue to lose, to speak now is meaningless. ”

The fruits of the ignorance of politicians were not slow to affect the filling of the market with counterfeit AKs and the use of unique technical solutions, which took years of hard work, in foreign models of weapons. The vengeance for the vulgar materialism of the Soviet elite, who considered that the “iron” of the final product was all, and the process of obtaining new knowledge and its documentation was nothing, was a defeat in the Cold War.

The weapons of the Americans were the cognitive technologies generated by the DARPA. As an experienced wrestler uses the power of an opponent, so the United States could easily feed its defense industry from the intellectual resources of the USSR. For us, access to advanced technologies was securely blocked by the COCOM system. The milestones of this struggle are the transition of the Soviet electronic industry to the EU-based computer and an error in the assessment of Reagan’s Strategic Defense Initiative (SDI).

HOW IDEAS ARE BORN

Nowadays, the struggle is on the legislative field of the Russian Federation, where the US influence agency seeks to slow down the development of cognitive technologies and the application of the results of intellectual activity (REED) in the real economy. Targeted “bookmarks” of this kind are clearly visible in the federal laws “On Education in the Russian Federation” and “On the Russian Academy of Sciences”, prepared with the participation of the HSE.

The attempts of reformers to create without dialectics of cognitive activity in the “open field”, in the words of Vladislav Surkov, a new product are illusory, it is worth attracting large investments. As always, pseudoscientific feats breed wooden bicycles and black holes in the budget of the Russian Federation.

Intellect was overboard with the concept of a unified technology as a result of scientific and technical activity, including final products, inventions, utility models, industrial designs, computer programs or other results of intellectual activity (Civil Code of the Russian Federation, Chapter 77 Art. 1542, paragraph 1). Innovation is considered a new and simply improved product. The absurdity of these formulas is obvious: computer program innovations depend on the quality of the cognitive technologies of the programmer, his knowledge and experience. The laws of the Russian Federation make it possible to name and finance as innovative all projects that do not yield a competitive product of their activities.

The competitiveness of AKs is made up of the results of the creative reconstruction of the technologies of the famous Mosin rifle, the critical analysis of the principles of operation of the Degtyarev and Shpagin submachine gun (RPM and PPSH) and the TT pistol. The talent of Sergey Korolev was revealed when the breakthrough ideas of Konstantin Tsiolkovsky, Yuri Kondratyuk and Werner von Braun were embodied in the metal, with the skillful use of the knowledge and experience of German specialists in Russian conditions.

The creative world of the designer of weapons is not only the past and the present, but also the imagination that paves the way for innovation in the future. “Imagination is not only directly dependent on the wealth of a person’s previous experience, but is itself a means of expanding this experience:“ If in the first case imagination rests on experience, in the second, experience itself relies on imagination, ”says the famous psychologist Lev Vygotsky.

The idea of ​​the analytic-synthetic “enrichment of information ore” by the CIA is formulated as follows: “Any number of facts ... does not have any value until the information officer reveals the meaning of these numerous facts, compares them and transfers them to a form in which their meaning will be perfectly clear "(V. Platt. Strategic Intelligence Information Work. Fundamentals. New York, 1957).

Accidents and disasters, unsuccessful attempts to solve complex problems have always been a unique source of knowledge and object for scientific intelligence. “Nothing is so instructive,” writes Peter Kapitsa, “as the delusion of a genius.” The foundation for the technology of generating new knowledge is the ideas of the activity approach and the theory of the phased formation of the mental actions of the Soviet psychologists Alexei Leontyev, Peter Halperin and Nina Talyzina.

Based on the laws of knowledge, the content of cognitive technologies is the intellectual activity of accumulating, systematizing, reconstructing, expanding and diversifying sources of knowledge and experimental data, enhancing the designer’s creative resource, his imagination, fantasy, intuition, heuristics, critical analysis and synthesis aimed at searching and explanation of new facts, the application of scientific knowledge in breakthrough military and civilian technologies.

Historical a contribution to such technologies was the idea of ​​the ancient Greek commander Epaminondas (718–362 BC) to concentrate forces for the main attack in the decisive sector, as well as for the first time to organize close interaction of diverse forces - the attacking cavalry with lightly armed infantry. Today, these technologies are the key to the success of projects of any scale and complexity.

The success of the Soviet atomic project was largely determined by the technological strength of strategic intelligence, aimed by our physicists at key information points of the US Manhattan project.

The dependence of the appearance of the final product on technology helped the great Mendeleev to discover the secret of German smokeless powder for production waste.

The Israelis reconstructed the technologies and consistently repeated all the stages of development and modernization, reproduced them in the LAK-30 system. The same way, contracts for the modernization of MiG-160, MiG-21, Su-29 and Su-25 aircraft left us.

The breakthrough in the field of training of engineering personnel and scientists of the new formation for the military-industrial complex, the Strategic Missile Forces and the Navy was the opening of the Moscow Institute of Physics and Technology and the Higher Naval School of Weapon Engineers in 1951.

The productive idea of ​​Academician Primakov to mobilize the enormous intellectual possibilities of interaction between civilian and military technologies today is embodied by engineering methods at Saturn and in the development of the first modern platform in the Russian Federation, the Sukhoi Superjet.

A weapon is a continuation of the designer’s thoughts in the main component, the target guidance tool. Other components - defeats and deliveries - are always subject to the first, innovative, bringing victory over the enemy.

Today, the front of the armed struggle has no boundaries and passes through the subconscious of a person, to which terrorism, which still possesses a strategic initiative, is aimed. As a means of delivery and defeat, he uses any means, including exotic, to defeat the enemy’s spiritual strength. Belief in success is instilled by the knowledge of the enemy’s weapons and the innovative resource of Napoleon’s law: “You can win any weapon, except the weapon of the spirit.”

Ctrl Enter
Noticed oshЫbku Highlight text and press. Ctrl + Enter
We are
Saratov club "Patriot": not to be afraid of the enemy and love the MotherlandRussian "nationalism" in persons - statements of some famous people of Russia in the XVII-XX centuries
Military Reviewin Yandex News
Military Reviewin Google News
10 comments
Information
Dear reader, to leave comments on the publication, you must sign in.