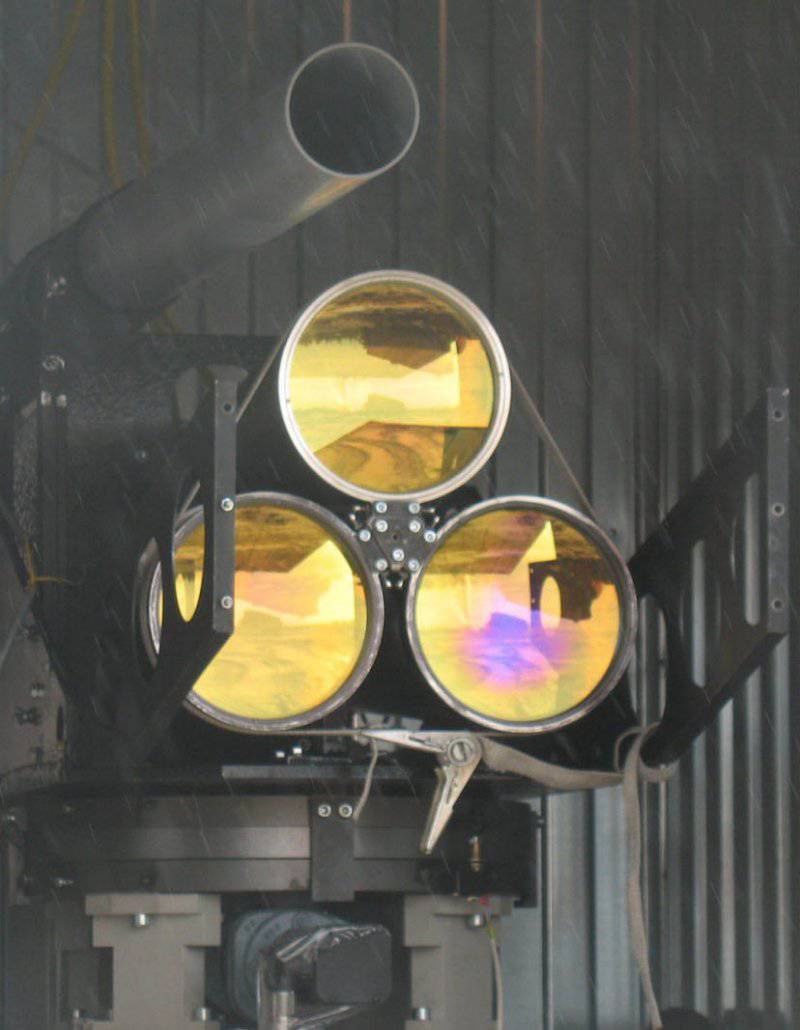 In recent years, active work on the creation of combat lasers has been going on in different countries. Promising weapon This class is expected to have high performance and will be able to have a serious impact on the face of future armed conflicts. Some progress has been made in the field of combat laser systems, but such weapons are still far from practical use. Scientists and designers only have to solve a number of important problems that prevent laser weapons from entering the army. In the meantime, several projects of laser systems have been created in our country which, being somewhat similar to weapons, are already being put into practice.

In the early nineties, the Troitsk Institute for Innovation and Fusion Research (SSC RF TRINITI) began research work aimed at creating a promising technological complex based on a laser. It was assumed that the mobile laser technological complex (MLTC) could be quickly delivered to the right place, deployed and prepared for work, after which it would be able to cut various objects and structures. Such a system, as conceived by the authors of the project, could be used to solve a wide range of tasks faced by various enterprises. First of all, the MLTC complexes were supposed to be used to eliminate various accidents, etc. works

By the end of the nineties, TRINITI State Research Center completed work on the first two projects. In the projects MLTK-5 and MLTC-50, some general ideas and developments were used, but these complexes differed in a number of parameters. Their main difference was in the type and power of the laser. Laser complex MLTK-5 developed power 5 kilowatt, MLTC-50 - 50 kW. The first two mobile laser technology complexes used lasers of different systems. A less powerful complex was equipped with a continuous gas laser (working medium — a mixture of carbon dioxide, neon, and helium) of a closed circuit pumped by an independent discharge. The MLTK-50 complex, in turn, received a repetitively pulsed electro-ionization laser using a mixture of air and carbon dioxide as the working fluid.

The MLTK-5 mobile laser complex was made in the form of several units installed on an automobile semi-trailer (total weight about 11 tons) and suitable for relatively simple transportation to the place of use. If necessary, the components of the complex can be quickly delivered to the right place and prepared for work. The maintenance personnel of the 2-3 person can prepare the installation for operation in one and a half to two hours. The capabilities of MLTK-5 allow to generate laser radiation with power from 0,5 to 5 kW with a wavelength of 10,6 μm. Consuming about 150 kW of electricity (380 V, 50 Hz), the complex MLTC-5 can affect objects at a distance of about 30 meters. The permissible time of continuous operation of the laser reaches 8-10 hours.

The main task of the MLTK-5 complex is remote cutting and welding of various structures. The power of the laser used makes it possible to have a destructive effect on various objects at a distance of several tens of meters. However, studies have shown that MLTC-5 and similar systems can be used to perform other tasks. Thus, the possibility of cleaning surfaces from various contaminants was investigated: technological deposits, paints, etc. using the so-called laser peeling. The same technology allows cleaning the water surface from the oil film. Thus, the actual range of tasks that can be solved with the help of mobile laser complexes is much wider than it might seem at first glance.

The development of the MLTK-50 complex was carried out by the Troitsk Institute of Innovative and Thermonuclear Research in collaboration with Gazprom. The main task in the development of this project was the creation of a mobile laser complex capable of cutting metal and reinforced concrete structures. Technique capable of cutting a variety of designs at a distance from them, was proposed for use in emergency work on flowing gas or oil wells.

A pulse-periodic electro-ionization laser was chosen as the basis for the MLTK-50 installation, using a gas mixture as the working fluid. The mixture consists of atmospheric air with a five-percent additive of carbon dioxide. The gas mixture is pumped through the working chamber at a speed of the order of 8 kg per second. At the same time, the gas flow reaches speeds up to 50 m / s. To transfer the gas mixture at such a speed, it was necessary to create a pump based on a serial aircraft engine. Gas turbine unit is located in such a way that the working chamber of the laser is in its air intake device. The 50-kilowatt laser and associated equipment were placed on two automobile semi-trailers. The first is the base for the actual laser and telescope beam guidance system. The second semi-trailer, in turn, carries a pumping system and a number of other auxiliary components of the complex. The total weight of the two semi-trailers complex MLTC-50 is close to 50 tons. Mobile complex can be transported by rail in special containers.

Upon arrival at the place of work, a three-person attendant can prepare the MLTC-50 complex for work for several hours. During operation, the unit requires a power supply of about 750 kW. The 50-kilowatt laser beam can be focused at a distance from 20 to 80 meters from the complex. The laser of the complex can operate continuously for no more than 10 minutes, after which an 20-minute break is required. In this mode, the installation can cut through metal and reinforced concrete structures, carrying out the task. Gazprom received several sets of the MLTC-50 system.

The next mobile laser technology complex was created in the interests of the state corporation Rosatom. The MLTK-2 installation was developed not only for remote cutting of various designs, but also for decontamination of surfaces. The complex MLTK-2 consists of two modules of 2x2x2 meter size, which together weigh no more than 2 tons. A fiber laser with a power of 2 kW used in this complex can cut metal parts with a thickness of up to 20 mm at a distance of about 6 meters from the output optical head. It is possible to take the last one to a distance of several tens of meters from the main modules of the complex. 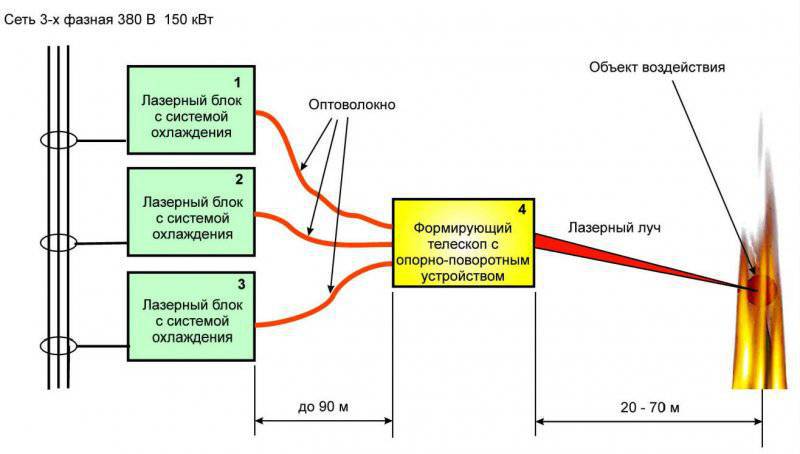 The block diagram of the laser technological complex MLTK-20

The mobile complex MLTK-2 is used not only by Rosatom, but also by the SSC RF TRINITI. The manufacturer, having refined the original complex, created a site for commercial cutting of metals. At the request of the customer, the new installation is capable of cutting sheets of ferrous or non-ferrous metals with a thickness of no more than 14 mm.

The further development of modular mobile laser systems was the MLTK-3 system. In its composition there are three sources of radiation with a power of 1 kW. Each of these radiation sources is equipped with its own cooling system. The generated radiation of three sources is transmitted via fiber optic cables to the beam forming and positioning system. This unit is responsible for combining several rays into one and pointing it at the desired object. A characteristic feature of the complex MLTK-3 is its architecture. It is divided into seven modules, each of which weighs no more than 100 kg. This facilitates the transportation and use of the entire complex.

The latest mobile laser complex created at the Troitsk Institute of Innovation and Thermonuclear Research has been MLTK-20, developed for Gazprom. By its architecture, it resembles the MLTK-3 described above. MLTC-20 consists of four containers of the 2x2x2 size with a meter weighing about two tons each. Three out of four units are equipped with ytterbium fiber lasers with adjustable power (from 0,5 to 8 kW) and their cooling systems. These three blocks are connected to the fourth using a fiber optic path. The fourth block houses the forming telescope, the beam guidance systems and the operator’s workplace. 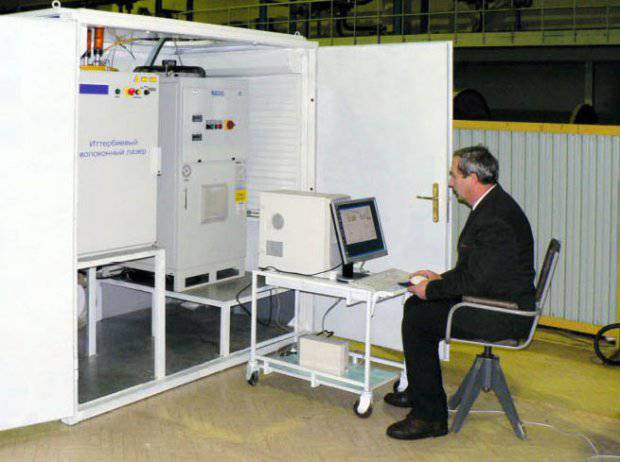 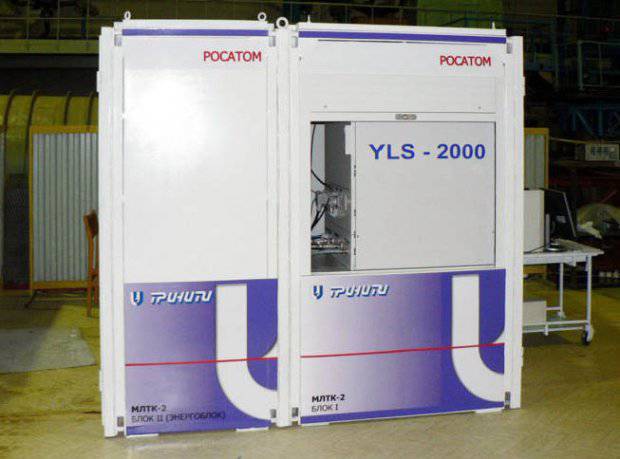 The deployment of complex MLTC-20 after delivery to the place of work requires no more than half an hour. During this time, maintenance personnel must connect all the cables and run the equipment. The fiber optic cables used in the MLTC-20 complex allow you to place blocks with radiation sources at a distance of up to 90 meters from the block with the forming telescope. The telescope is able to focus the laser beam at distances from 20 to 70 meters. At maximum power, the MLTK-20 complex is capable of cutting metal structures with a thickness of more than 50 mm. Depending on the thickness of the metal being cut, the cutting speed can reach two meters per hour. The modular architecture allows the use of the MLTK-20 complex in various configurations. Certain tasks can be performed with one unit with a radiation source and one with a forming telescope. In addition, it is possible to increase capacity by using additional units with laser equipment.

In 2011, the complex MLTC-20 showed its “skills” several times. So, in May, in the training center "Dosang" (Astrakhan region), owned by the company "Gazprom", passed the tests of a new laser installation. The test program included remote dividing cutting of gas valves with a wall thickness of 50 mm. From a distance of 40 meters, the laser complex successfully cut a conditional well pipe. In addition, these tests showed the possibility of operating the laser complex after transportation over long distances. 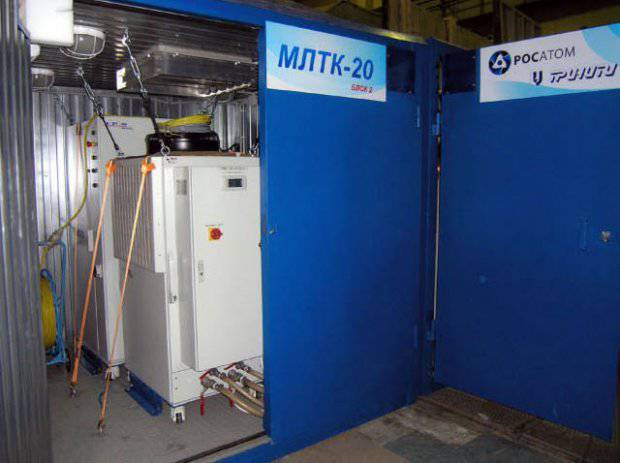 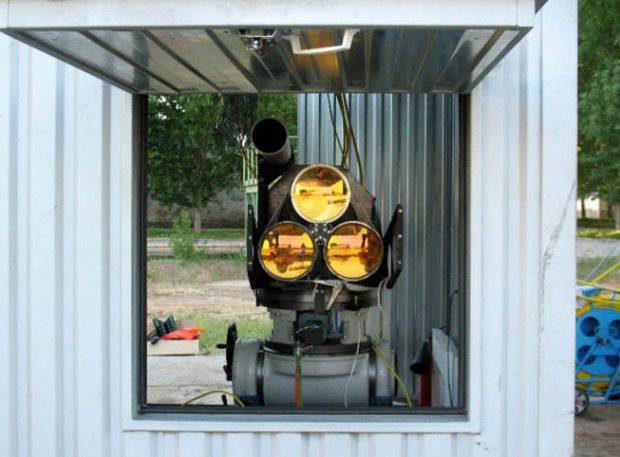 In July, 2011, the MLTC-20 complex was tested under the conditions of a real repair operation. It was decided to send the installation to the Yamalo-Nenets Autonomous District, where the accident occurred at the well No. XXUMX of the West-Tarkosalinsky gas field. After a journey longer than 506 kilometers, the laser complex was mounted near the emergency well and soon began its work. In order to continue the work to eliminate the accident, it was necessary to dismantle metal structures with a total weight of about 4000 tons, which prevented gas workers from working using standard tools. The powerful thermal radiation from the gas torch did not allow the forming telescope to be installed at a recommended distance of no more than 240 meters from damaged structures. For this reason, the main work was carried out from a distance of 50 meters. During 70 hours, the complex MLTC-30 cut all the necessary constructions, after which the fire extinguishing began.

As you can see, mobile laser technological complexes of the MLTC family, developed by the Troitsk Institute of Innovation and Thermonuclear Research, clearly showed their effectiveness, and they did this not only during testing, but also under the conditions of real work to eliminate a fire in a gas well. It should be noted that the complexes MLTK are purely civilian developments, not intended for military use. The power of these systems is not sufficient to quickly hit targets at a great distance, which, however, has almost no effect on their effectiveness in carrying out the tasks for which they are intended to be solved. Perhaps, the developments on these projects in the future will be used to create combat lasers, but in their current form, the MLTC family systems have a purely peaceful purpose. 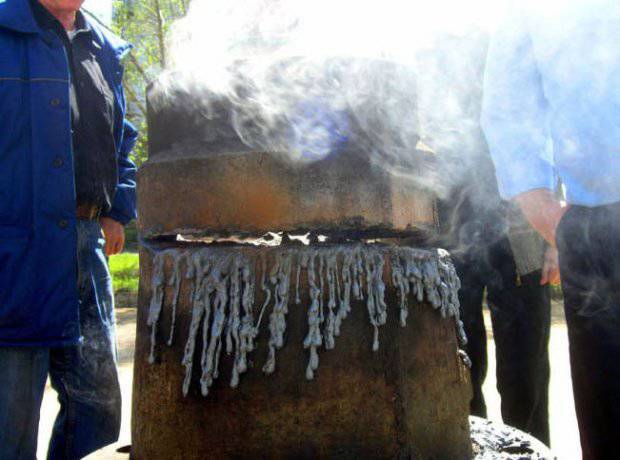 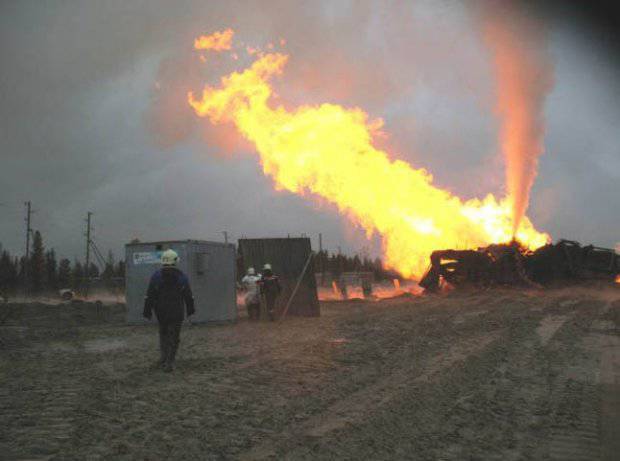 Telescope block extended to the distance 50 meters from the object 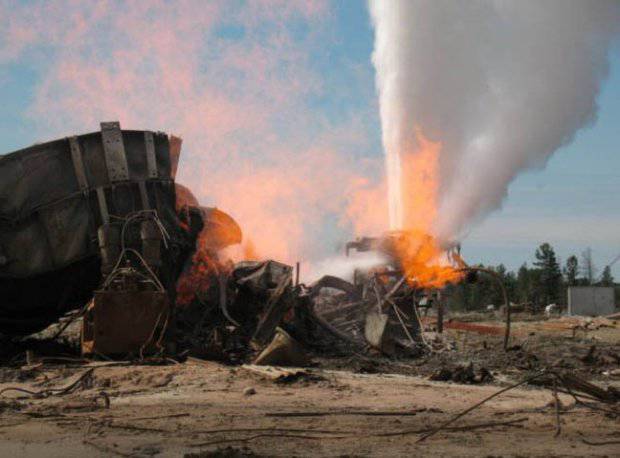 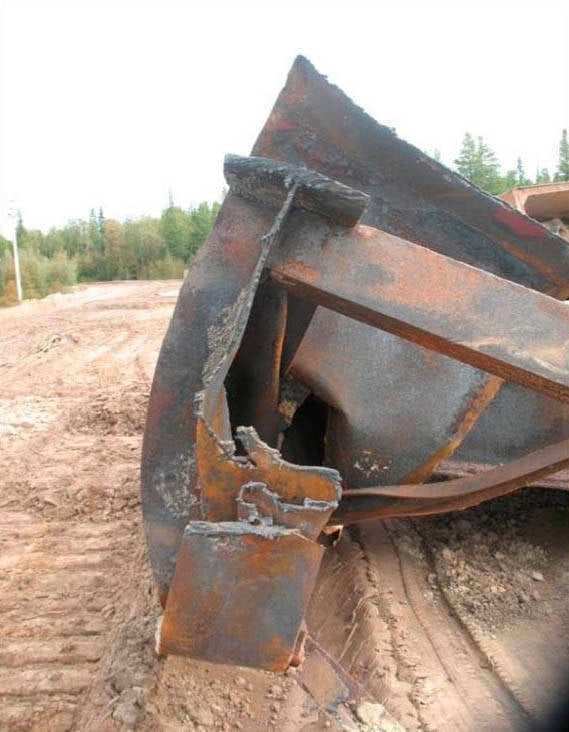 The edge of the bearing support tower, cut by laser 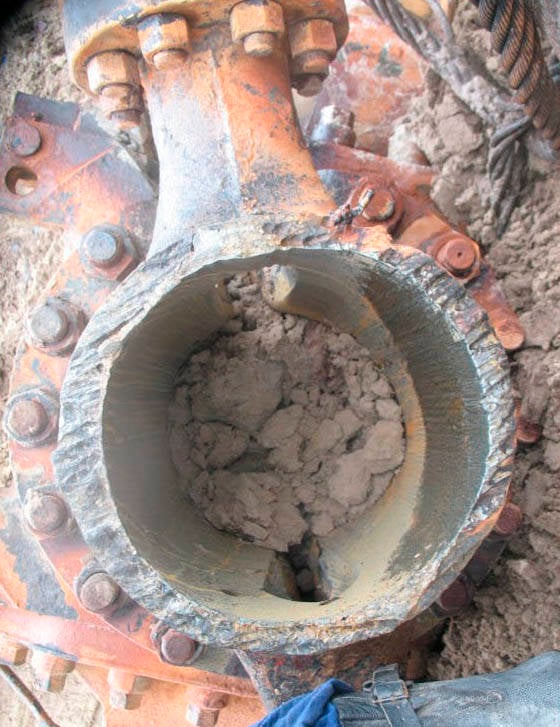 Cut the flange of the well pipe