Chain of referendums in Moldova: separatism or the outcome of the anti-people policy of the state authorities?

February 4 2014
63
Last Sunday, in one of the autonomies of Moldova - Gagauzia - a referendum was held in which local residents had to answer the question, what kind of integration vector do they choose? Before discussing the preparation and conduct of a referendum in the Gagauz autonomy, it is necessary to say a few words about Gagauzia itself.


Gagauzia is a small territorial association in the south of Moldova with a population of about 165 thousand inhabitants. The total area is about 1850 sq. Km. (for comparison: this is about one and a half territories of St. Petersburg without agglomeration). Local laws define Gagauzia (Gagauz Yeri) as a form of Gagauz self-determination (and there are more than 80% of the population in this Gagauz region) as a territorial autonomous entity (TAO or ATO). If we talk about the confessional composition, then about 85% of the population of Gagauzia are Orthodox. The administrative center of autonomy is the city of Comrat (25 thousands of inhabitants). The main document is the Constitution of the Republic of Moldova and the Code of Gagauzia.

Education in schools is conducted mainly in Russian, more than two-thirds of the broadcast media are Russian-language.

According to the Code, a settlement in the south of Moldova is Gagauz, if it contains more than 50% of the population - ethnic Gagauz. In the law “On the special legal status of Gagauzia” it contains remarkable points:

Art.5 p.2:
Localities in which Gagauz make up less than 50 percent of the population can be included in Gagauzia on the basis of the free will of the majority of voters, revealed by a local referendum held at the initiative of at least one third of the voters of the corresponding locality.

Art.5 p.3:
The inclusion of settlements in Gagauzia ... is made according to the results of a local referendum held by the Government of the Republic of Moldova in each settlement.

Art.5 p.4:
Localities that are part of Gagauzia retain the right to withdraw from its structure through a local referendum held at the initiative of at least one third of the voters, but not earlier than one year from the date of entry into Gagauzia.

So, the authorities of the territorial autonomous entity of Gagauzia decided to hold a referendum last Sunday, the possibility of which is spelled out in the regulatory documents of the ATO. In the course of the referendum, the residents of the autonomy were asked to make a choice: what kind of integration direction would they choose, and moreover, perhaps, if Moldova lost its independent status.

Text of the referendum questions:

Do you approve of the course of the foreign policy vector of the development of the Republic of Moldova, aimed at joining the Customs Union (Russia-Belarus-Kazakhstan)?

Do you approve of the course of the foreign policy vector of the development of the Republic of Moldova, aimed at joining the European Union?

Can such a referendum be considered an anti-Moldavian provocation? At least, the official Chisinau considered this way, and therefore the Moldovan authorities, even before the start of the referendum in Comrat and other settlements of the Gagauz ATO, declared that they strongly oppose the referendum and in any case do not recognize its results. Well, official Chisinau can be understood, but didn’t the very policy of the same Chisinau led to the question in Gagauzia: Do Moldova last for a long time as an independent state? If we take into account the numerous statements by a number of representatives of the official Moldovan authorities that the main course of Moldova is to join the European Union at any cost, even by joining the province to Romania, then the only “provocation” that can be seen in the Gagauz referendum is itself The official Chisinau’s position that pushed Comrat to this referendum. When they say to you: do not twitch - the injection of euthanasia will still dot the i's, then you can hardly blame the Gagauz leaders for the cultivation of separatism. But the entry of Moldova into the European Union (in the future, apparently, really only through the outskirts of Romania) - this is euthanasia both for the Gagauz autonomy and for the entire Republic of Moldova. And if in Chisinau, to put it mildly, not everyone understands (or simply does not want to understand), then in Gagauzia they managed to weigh all the pros and cons (as in Transnistria at the time).

According to the data provided by the official authorities of Gagauzia (the organizers of the referendum), the turnout was almost 70,5%. At the same time, only about 2% of the inhabitants of the autonomy spoke in favor of possible entry into the EU. More than 95% of those who voted, gave their “for” integration with the Customs Union of Russia, Belarus and Kazakhstan. The head (he is a bashkan) of Gagauzia Mihail Formuzal on his page on the social network about the referendum held in the ATO wrote the following:

Phenomenal turnout result !!!! First time in stories Gagauzia 70,42% of voters !!! Read! Envy! Our voice has sounded to the whole world !! " 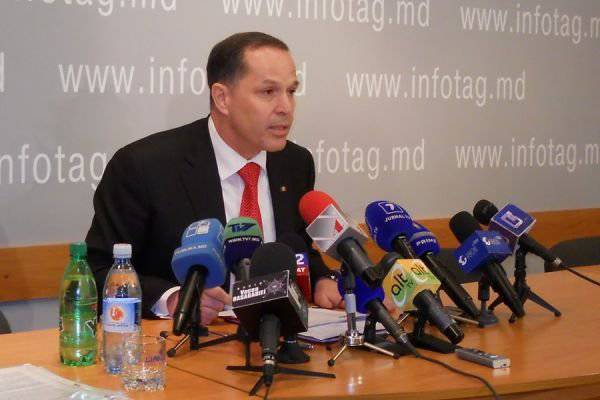 Mihail Formuzal - the head of the ATU Gagauzia

Immediately after the preliminary publication of the results and the above reaction of the head of autonomy, a number of representatives of the Moldovan public (say, not pro-government) expressed in the spirit that Formuzal would have become an excellent president of Moldova instead of the “amorphous” Timofti, since Formuzal is not afraid to talk openly about their position and openly support the position of the people. But supporters of the course chosen by the Moldovan authorities have already managed to declare Mihail Formuzal a separatist who is trying to break Moldova. Well, here it is as they say: whose cow would moo ... If someone today is tearing up Moldova, it's her current authorities, who neglect both the interests of the country's economy, and the interests of its people.

As applied to the past Gagauz referendum, one can single out the fact that it was decided to conduct a similar procedure of will not only in autonomy, but also in the Moldovan territory itself (not part of the ATU Gagauzia). We are talking about the municipality of Taraclia and the Taraclia region of Moldova, about 85% of the population of which are ethnic Bulgarians. It would seem, well, here, for sure, everyone will choose the course of the current Moldovan authorities to integrate with the EU, if only because Bulgaria itself has been listed in the European Union for several years ... But in reality everything turns out differently. Local district authorities actually refused to follow the course of the official Chisinau and announced that cooperation with the CU was much more productive for the population of Taraclia. A referendum similar to Gagauz, the municipal authorities are going to hold in the near future.

It turns out that the central authorities of Moldova actually lose control not only over the autonomies, but also over individual districts, which, in fact, constitute the Moldovan state itself. If this trend continues further, then the obviously failed policy of the Moldovan state authorities may lead to a new contention in the republic with all that it implies.

If more and more new areas of Moldova declare their desire to integrate with the Customs Union, and the authorities are deaf to this elementary, Moldova will have to integrate with the EU "before the start": for example, the offices of the president, the prime minister, some ministers and deputies may withdraw Romania, and the rest of the country’s territory will be self-determined differently ... Although, are the said offices not already a territory of Romania? ..