The fate of the ships of the Navy GDR

February 5 2014
3
Of all the small fleets of the countries - allies of the USSR under the Warsaw Pact, the Navy of the National People's Army of the GDR at the end of the 1980-s. was the most efficient. It was based on modern ships, which entered service in the 1970-x - 1980-x. In the western part of the Baltic Sea, the Navy of the GDR could independently solve the following tasks:
- defense of the coast;

In total, at the time of the unification of Germany in 1990, it included 110 warships of various classes and 69 auxiliary vessels. As part of the marine aviation there were 24 helicopters (16 - of the Mi-8 type and 8 - of the Mi-14 type), as well as 20 Su-17 fighter-bombers. The number of personnel of the Navy is about 16 thousand people.

The basis of the anti-submarine forces were 16 of small anti-submarine ships (IPC) of the type “Parchim” pr.NUMX. The ships were built from 133.1 to 1980 at the Peenewerft shipyard in Volgast under a project developed in the GDR with the help of Soviet specialists on the basis of the IPC 1985. In 1124-1986 for the USSR, the 1990 IPC of this type was built according to the modernized 12-M project.

Another example of cooperation between the Soviet Union and East Germany in the field of military shipbuilding was the construction of missile boats (RCA) in the GDR according to the Soviet project (RNXXX) missile boats (RCA) with a full displacement of 151 t, which were planned to be equipped with eight newest anti-ship missiles (UCR) under the Soviet license was planned to deploy in the GDR). It was assumed that this RCA would go into service with the fleets of the countries participating in the Warsaw Pact. Before the unification of Germany, it was possible to build only two boats of this type, four more were in varying degrees of readiness. To replace the outdated RCA, pr. 380 (at the end of the 205-s, all 1980 RCA of this project was put into reserve) the Navy GDR received five missile boats from the USSR, pr.12-RE. These boats (developed by the Almaz Central Design Bureau on the basis of 1241-T Ave.) from 1241.1 were built for export by Rybinsk and Yaroslavl shipyards. Total for Bulgaria, GDR, India, Yemen, Poland and Romania built 1980 RCA. The NDR GDR also had six large torpedo boats, 22 Ave., built in the USSR in 206-1968.

It is interesting to note that only in the GDR of the GDR there existed such a class of ships as ultra-small (with a displacement of 28) TCA of the “Libelle” type (further development of the TCA of the “Iltis” type) with torpedo tubes for 533-mm torpedoes. The torpedo was fired back - just like the Soviet TKAs of the type “G-5” in 1930-1940 did. East German fleet had thirty TKA type "Libelle".

The amphibious forces included 12 amphibious assault ships (DCs) of the “Noyagswerda” type (full displacement 2000т), designed and built in 1974-1980. in the GDR. Two more ships of this type were converted into supply transports.

The NDR of the GDR possessed sufficiently numerous mine-sweeping forces. Since 1969, the construction of base minesweepers (BTs) of the type “Greiz” (“Kondor II”) has been carried out. The East German fleet received 26 ships of this type, another 18 units completed in the version of the border TFR (type "Kondor I") for the Coast Guard (Grenzebrigade Kuste). Five BCS were converted into rescue and training vessels.

As part of the subsidiary fleet there were 69 vessels for various purposes. Basically, these were modern ships of relatively small displacement, built at national shipyards, as well as in the USSR and Poland.

October 3 1990, the “state of workers and peasants on German soil” (as its first leader, Wilhelm Peak, proudly called the GDR), ceased to exist, and the leadership of united Germany urgently raised the question of what to do with the personnel and weapons that inheritance from the NNA GDR. A temporary joint command of the Bundeswehr "Ost" (East) was formed on the territory of the former GDR, which assumed the role of a liquidation commission. The personnel of the military service were gradually fired, and a certain number of officers, after a corresponding "check", were hired to serve in the Bundeswehr. Weapons and equipment, with rare exceptions (MiG-29 fighters), were supposed to be sold to other countries or disposed of. The entire fleet of the former GDR was concentrated in Rostock and waited for its fate. Immediately went to scrapping the oldest and most demanding repair ships. The government of Germany was intensely looking for buyers, hoping to profitably sell the most modern combat units.

All 16 IPC type "Parchim" in 1992 was bought by Indonesia, the ships after the conversion and training of crews gradually moved to Surabaya. It is interesting to note that in 1996, the Zelenodolsk PKB proposed to the command of the Indonesian Navy a project to modernize these ships to the level of the IPC Ave. 133.1-M. In addition, Indonesia 9 CSTs of the type “Kondor II” and all 12 DCs of the type “Hoyerswerda”, as well as two supply transport re-equipped from DCs, were acquired.

Of all the inheritance inherited by the FRG, the greatest interest was caused by the RCA, pr.1241-RE. Considering that among Russian buyers weapons there are, to put it mildly, unfriendly US states, the command of the US Navy decided to thoroughly examine the boat. The choice fell on the PKA "Hiddensee" (formerly "Rudolf Egelhofter"). In December, 1991, on the deck of a transport vessel, he arrived in the United States and was assigned to the United States Naval Research Center in Solomon, Maryland. The boat was subjected to extensive testing on a special program. American specialists highly appreciated the design of the ship hull, its handling and maneuverability, but there was an insufficient (by American standards) resource of marching and afterburning gas turbines, which were traditionally criticized for electronic weapons. Also noted was the low combat effectiveness of the P-20 missiles (export modification of the C-C P-15M “Termite”), a six-barrel AK-630 AU received a good rating. In general, it was concluded that the RCA of this type, armed with more modern anti-ship missiles "Mosquito" (pr. 12411, 12421) or "Uran" (pr. 12418) represent a rather serious danger to the US Navy and its allies.

The remaining four RCAs remained in Rostock. Periodically, there were reports of the desire of Poland, which has four similar boats, to purchase two more from the Federal Republic of Germany. Profitable selling Indonesia most of the modern ships, the government of Germany began to actually distribute the rest. So, in 1993-1994. it was decided to transfer three to Latvia, and to Estonia - nine converted boats, pr.205 (the RCC П-15 launchers were removed from them). Part of the boats has already been transferred. Latvia also received two Kondor II type TSSs. Germany was also generously handed over to the Kondor I type border guard posts: four units to Tunisia, two to Malta, one to Guinea-Bissau, and two (in 1994) to Estonia.

The least fortunate were three TFR pr.1159 - not finding a buyer, the command of Bundesmarine sold them for scrap.

Not a single warship of the Navy of the GDR was incorporated into the Bundesmarine. Three new boats, pr.151 (one was completed already in Germany, three were sold to Poland in an unfinished state) were reequipped and incorporated into the Coast Guard (Bundesgrenzschutz-See) of the Federal Republic of Germany, along with three border guard missiles of the type “Kondor I”.

Thus, the fleet of the GDR ended its existence, whose ships passed under the flags of eight states. 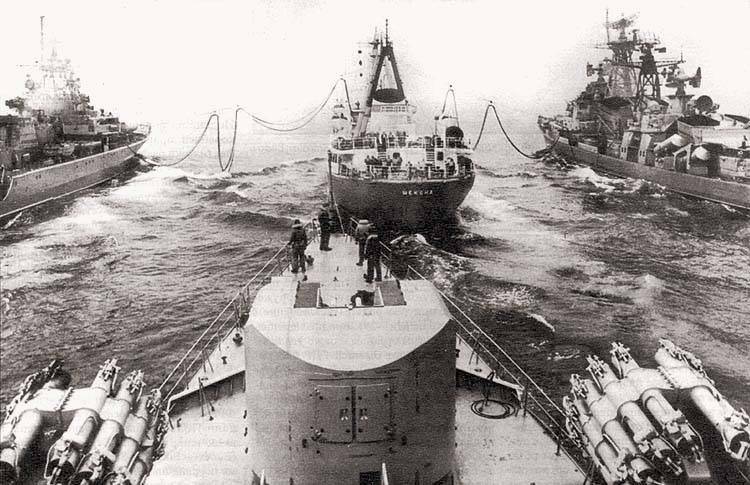 "The ships of the socialist republics of the Baltic Sea in a single system." Reception of fuel from the tanker "Sheksna" by two Soviet ships and the German TFR pr.1159 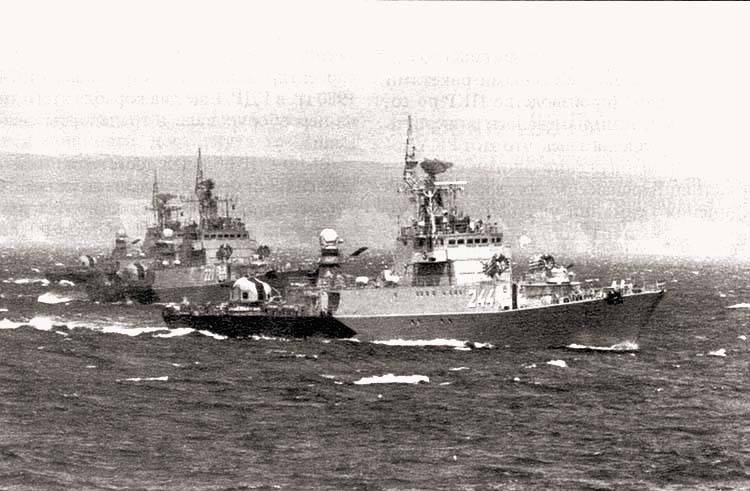 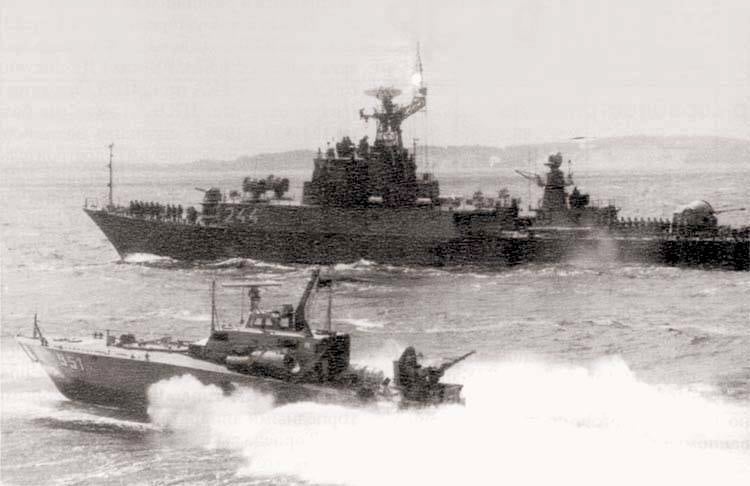 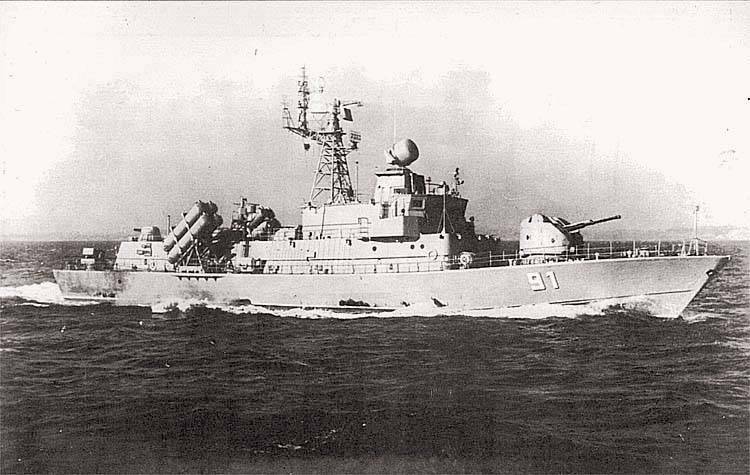 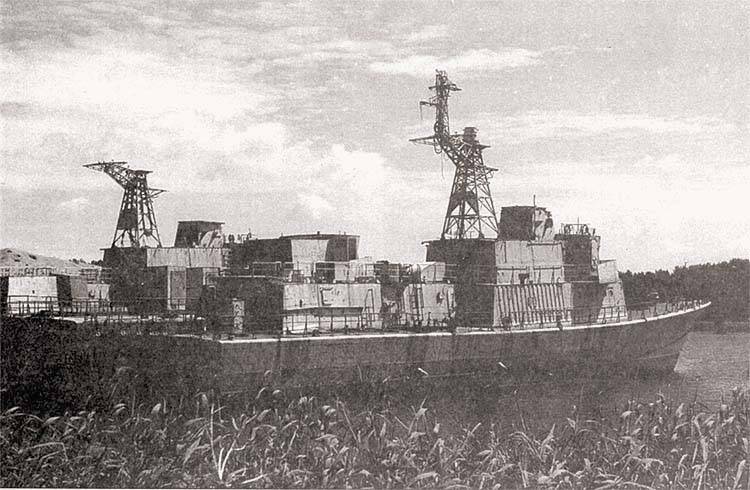 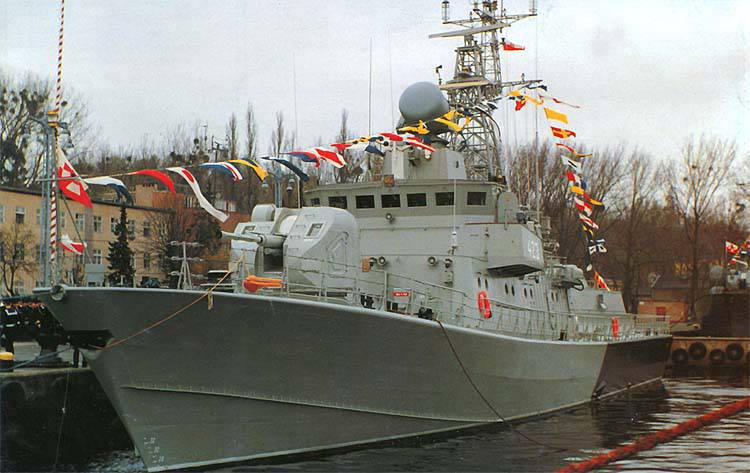 Raising the flag on the Grom artillery boat of the Polish Navy, 28 on April 1995. Ship Ave. 151 was purchased from Germany and completed in Poland according to an amended project 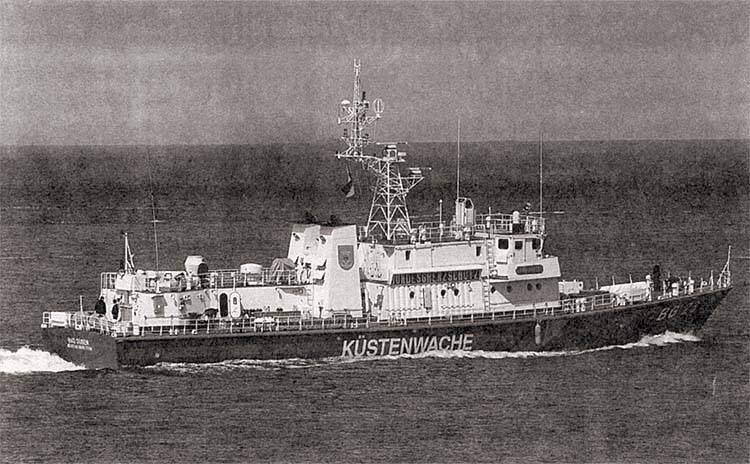 Ctrl Enter
Noticed oshЫbku Highlight text and press. Ctrl + Enter
We are
The cruisers of the 68 bis project: the Sverdlov missions in the post-war fleet of the USSR. 3 part"Svetlana". History of creation
Military Reviewin Yandex News
Military Reviewin Google News
3 comments
Information
Dear reader, to leave comments on the publication, you must sign in.