February 4 2014
52
Jürgen Elsässer (Jürgen Elsässer) is a well-known German critic of Anglo-American financial imperialism, who lives dull with the labels of ultraleft, ultra-right, democrat, fascist, anti-Semite and a person close in ideology to Ahmadinejad, Chavez, Putin and East German communists attached to him. He talks a lot and writes about supranational institutions of the EU, the power of international capital, the dominance of censorship acting in the interests of the world financial community. He considers Angela Merkel an American puppet, and liberalism finds it a disastrous direction of politics. Elzesser opposes early sex education, does not accept LGBT people, but calls himself publicly (which is not comme il faut in Europe) as heterosexual. 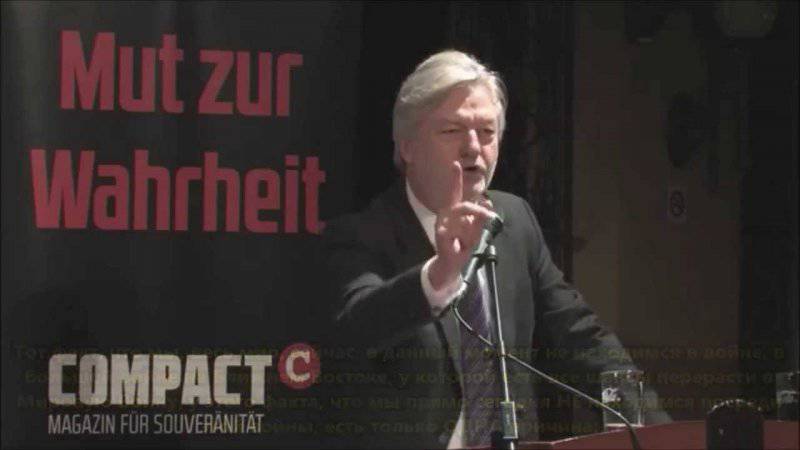 Last August he сказалthat Angela Merkel is an “American presidency”, the NSA dictatorship called it a “new national-socialist dictatorship”, and described the draft Transatlantic Free Trade Agreement as follows: “Do they want us to pay taxes directly from Washington?” Do Americans want to steal our patents directly? Want to genetically modified crap from "Monsanto" freely fell on our arable land? Being a German, you really feel nauseous at the sight of this servility, repetition and freezing ... "

In the magazine Elsesessa "Compact" and блоге political activist, we will find a lot of articles and video addresses that will allow us to highlight the main theses of a comrade and his associates and colleagues.

В one of the articles Gabriele Kubi, the author of the Kompakt magazine, touched upon the issue of so-called early sex education (“early sexualization”, if you directly translate the two-root word Frühsexualisierung in the headline of the relevant article from the German language), which is sore in Europe and especially in Germany.

Mandatory sex education was introduced in German schools in the seventies of the last century. But today we are talking about a “liberation” or even a “neo-liberation” sexual education. According to the author, this is the path to the complete elimination of sexuality from the moral field.

And that's what пишет on the topic of sexuality in “Compact”, Comrade Elsesser himself. “Ich bin hetero, und das ist auch gut so!” He exclaims and puts his exclamation into the heading. “I am heterosexual,” we translate, “and this is so good!”

This is not easy, dear readers and readers, the author writes, but I would venture to admit: yes, I love women, and I love having sex with these strange creatures! Although, Elzesser is ironic, the majority in our society finds it perverted when two people of different sexes kiss and intimate touch each other. Elzesser is even ashamed of his "archaic emotions." But he can do nothing with him: he loves women, and that's it.

Elzesser knows well that this kind of public acceptance will seem provocative to many. He understands that he is opposed to the demographic imperatives of the New World Order. Elzesser calls himself "the last of the Mohicans of the 20th century."

Mocking at the German government, the author writes that the Bundestag and the Bertelsmann Foundation decided to reduce the number of the German people, because there are too many emissions of CO2 from the German people, and this is dangerous. Germany must meet the climatic conditions prescribed in the Kyoto Protocols. It is a known bitterly ironic Elzesser that the German people must ensure the free space between the Alps and the North Sea, which will be occupied by poor refugees from Africa and Arab countries. Therefore, the Germans must give birth to fewer children ...

And here are the gentlemen attacking fascists.

В article "Not a crisis, but a deliberate attack by American finance capital," Comrade Elzesser spoke on a topic that became topical after the revelations of the activities of the NSA. By the way, the video in the article is called “Die EU auf dem Weg zur EUdSSR” (“EU on its way to the ESSR”). The text is a fragment of a lecture given in Switzerland.

According to the lecturer, the crisis is largely a consequence of the planned attack. We, Elzesser says, are dealing with an attack on humanity by the tycoons of the Anglo-American financial industry, which are rooted in Wall Street and in the City of London.

According to Elcesess, a new power has come into the world. This power is concentrated in the hands of "speculative states." Such states are primarily the United States and the United Kingdom. They practically produce nothing more: manufacturing industries, for example, in the USA, occupy no more than 10%. In Germany, its production in the economy has a share of 25%, and in India, Russia, China, the industry occupies more than 50%. That is, true wealth, everything that people really need, is no longer produced in Anglo-Saxon countries.

At the same time, the USA is the largest debtor in the world. Official US debt is 17 trillions of US dollars. But if you add the debts of all economic sectors (households, private enterprises, private banks, etc.), the amount will increase to 70 trillion. dollars.

The US budget deficit progresses from year to year, the author writes. Hole more and more! Dollars are printed with extraordinary ease.

So why is the US not bankrupt?

And this is the main secret of globalization and military secrets. The United States will not be declared bankrupt even if they accumulate more debts than all other states combined, because the United States has a huge military superiority. They spend on armaments more than the next seventeen industrialized countries, including China and Russia.

This is a predatory economy, and all of us - its victims, bitterly states Elzesser. The EU, in general, is not particularly to blame, but, meanwhile, it serves as a repeater of the “station” of the Anglo-American authorities.

This can be very well illustrated on the euro currency crisis. Here all runs the "Goldman Sachs". Everything that happens in Athens, Madrid or Lisbon begins and ends in Goldman Sachs and other American banks. Continental Europe is in the hands of Goldman Sachs, the German believes.

According to his convictions, Comrade Elzesser treats and the Ukrainian political crisis.

Yanukovych’s recent proposal to hand out ministerial portfolios to oppositionists and release all detained activists is considered by Elzesser to be a “fair compromise.” However, the author notes, the opposition rejected the proposal: give it all power. But the opposition will never get a majority. That is why they are ready to set fire to the whole country in order to build their rule on the burning ruins, Elzesser is sure.

The material provides a link to the plot of the channel "RT". The EU is joining forces in Ukraine with the fascists, comments on the video Elzesser. "Assault troops" hunt including Jews and inherited a lot from the UPA. The Freedom Party would have been banned in the EU long ago! But in Ukraine, it operates, working for the European Union!

So the distinction, Elzesser summarizes, is not between the left and the right, but between the national democrats and the non-democratic imperialists.

Observed and translated by Oleg Chuvakin
- especially for topwar.ru
Ctrl Enter
Noticed oshЫbku Highlight text and press. Ctrl + Enter
We are
Is there a solution to the problem of patriotic education of young people? Private initiativesResults of the week. "This is not for you ..."
Military Reviewin Yandex News
Military Reviewin Google News
52 comments
Information
Dear reader, to leave comments on the publication, you must sign in.