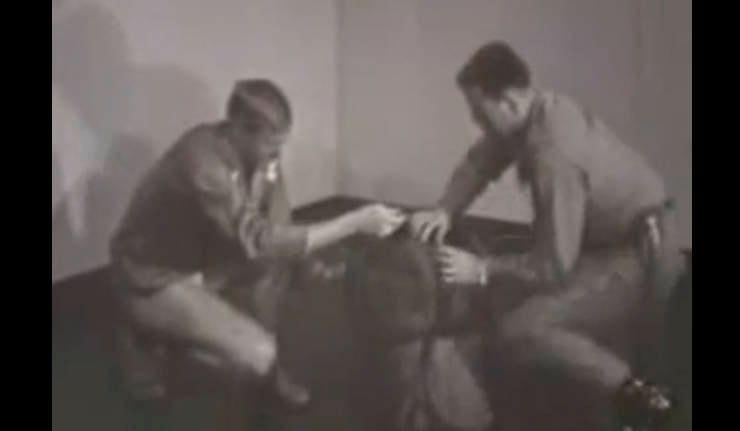 The revelations of nuclear saboteurs, who were prepared to throw into the territory of the Warsaw Pact countries, including the USSR, and to undermine the Soviet nuclear power plants with the help of "nuclear satchels" weapons and military bases, published by the American magazine The Foreign Policy.

The famous film directed by Stanley Kubrick "Doctor Strangelove, or How I stopped being afraid and fell in love with the bomb" ends with a terrible scene: the American major, riding a nuclear bomb like a cowboy, directs it to the Soviet city. So begins the third world war.

The film was shot in 1964, and perhaps Kubrick suggested that at the same time, the US military was planning a similar mission. It was then that the B-54 SADM (Special Nuclear Bomb, Special Atomic Demolition Munition) munitions came into service with the US Army, which the Americans planned to hit the most important infrastructure facilities in the Warsaw Pact countries.

The SADM device was a 64 kilo weight mine that fit in a backpack. The most sophisticated samples could lead to a nuclear explosion with a capacity of up to 450 tons, almost 15 times smaller than the Fat Bomb dropped on Nagasaki in 1945 year. However, this is enough to destroy, if not the whole city, then its important infrastructure facilities.

The shape of the ammunition was like a bullet. To bring SADM action, it was necessary to enter the code on the panel, covered with glow in the dark paint. According to the Pentagon, nuclear bombs were supposed to be laid on the territory of NATO countries in case of an offensive by the Soviet troops. The planned sabotage operations in Eastern Europe were not reported. However, according to The Foreign Policy, the United States prepared special units for operations in the territory of the Warsaw Pact countries.


"SADM teams took only the best people, the most experienced and proven to be reliable," Bill Flavin, former head of the SADM commando, The Foreign Policy quoted as saying. According to former members of the sabotage groups, only volunteers were recruited into their ranks. Someone went with joy, and someone, having learned the details, said: “No! I would rather go to war in Vietnam”.

Members of sabotage groups were introduced to weapons at the base of Fort Benning in Georgia. They also conducted training there. Even then, the shortcomings of SADM became clear. As a nuclear weapon, it was very light and compact (compared to the bombs that were dropped on Hiroshima and Nagasaki). But with 64 kilograms behind you do not run: the bomb had to be carried together. Perhaps that is why sabotage groups consisted of "twos". It is noteworthy that both saboteurs should have had one more bomb with them, a simple one - to destroy a nuclear weapon, in case of a possible capture by Soviet soldiers. At the same time, the nuclear reaction could not start, the bomb would simply have exploded, as a result of which limited radiation contamination would occur.

After setting the timer on the bomb, the members of the sabotage group had to flee and hope that after the start of the third world war someone would take care of their rescue and evacuation. Therefore, in many ways, these sabotage missions were suicidal.

In addition to training missions, saboteurs conducted reconnaissance operations in the territory of the Warsaw Pact countries. In particular, according to The Foreign Policy, for the supply of arms and food, SADM members have stored caches "throughout Eastern Europe." “When the Berlin Wall was demolished, we set off and destroyed some of these caches,” Flavin said. According to him, all the weapons and supplies were in place and ready for use.

The publication does not indicate in which Warsaw Pact countries it was planned to conduct operations using "nuclear satchels"; however, all these US data were to be transferred to Russian partners in 1990-ies. It is only known for certain that in the 1960s the USA asked the FRG to prepare mines for laying SADM and more powerful MADM nuclear bombs near the main transport hubs in West Germany. It is still unknown whether the charges themselves were installed there.

In 1989, all SADMs were written off, and in 1990s, they were disposed of under the control of the Russian military, which the Soviet counterparts, "nuclear satchels," also surrendered. However, as noted by The Foreign Policy, now all countries of the world are again showing interest in tactical nuclear weapons. At the beginning of 2000, much was said about the threat of nuclear terrorism: however, then most experts agreed that despite the theoretical simplicity and accessibility of creating a nuclear bomb, the production of compact devices, even SADM, would be beyond the power of terrorist groups. but also to most states. However, the recognition of American saboteurs once again reminds that the world is not so far gone from the edge, beyond which the recklessness of politicians can lead to the death of all life on Earth.