Why Washington will lose in Ukraine ...

February 3 2014
222
The neo-Nazi Bandera brew in the center of Kiev on Euromaidan continues to boil, supported by Western money, media, instructors and political pressure on President Viktor Yanukovych. Experts estimate it at about ten thousand fighter-attack aircraft. Ordinary militants, unlike their leaders, do not hide, speak to the camera that their goal is the physical destruction of the Golden Eagle, that is, the only force that protects power today, and is opposed to the coup and the chaos to come. 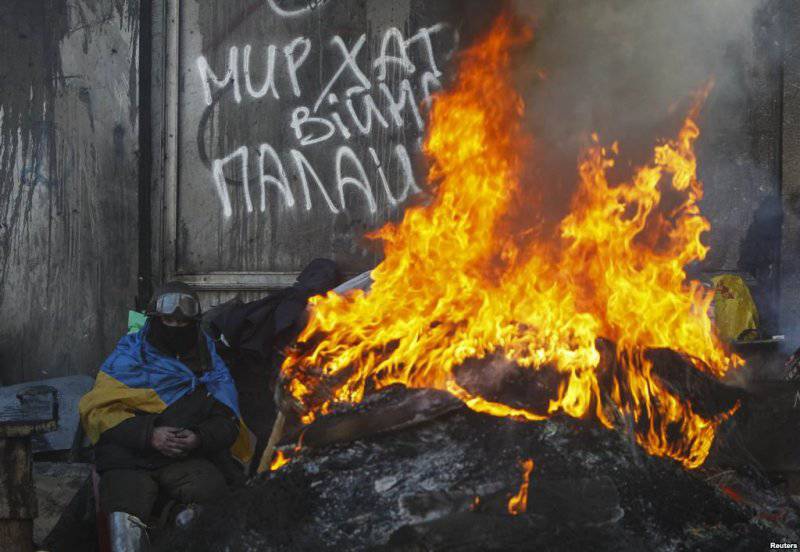 The three-headed opposition demands the dissolution of the Berkut. Of course, it must be dissolved ... because only after that it can be destroyed. So “Glory to Ukraine!” Yatsenyuk and Klitschko merge with the neo-Nazi choir of the Pygmybok.

However, what is the purpose of Washington (little depends on its satellites in Europe) when it relies on neo-Nazis? Drown Ukraine in chaos, then to transfer it to Russia? There is an opinion, but this option is very difficult to implement. A more interesting question: what will happen on Ukraine itself after the chaos, what is Washington’s cherished goal here?

Guessing it is not very difficult if you remember that the architect of Ukrainian politics in the United States is Vice President Joe Biden, who recently recommended Viktor Yanukovych to create a pro-European government. And in the recent past, he was the architect of Saakashvili, completely neo-Nazi Georgia. The order on the streets there was combined with torture in prisons (almost half of Georgia disloyal to Saakashvili suffered), the same order was in Nazi Germany in the last century. (And in Kiev, Bandera already have a torture room, and it has already been tortured.)

By the way, Saakashvili was on Euromaidan, apparently sharing his experience, and even came to the Munich Security Conference specifically from America, where he is now hiding from Georgian love in the position of American professor. It can be assumed that Joe Biden again decided to create a neo-Nazi state hostile to Russia, this time Bandera, in the style of Saakashvili Georgia. Instead of today's relatively neutral, “multi-vector” Ukraine.

Then it is logical that the festival euromaidan was replaced by Bandera's Maidan under the red-brown banners. Dmitry Yarosh, the leader of the "Trident" named after Stepan Bandera, declares: "Bandera is the present and the future of Ukraine." They only delegated powers to the three leaders of the opposition.

As soon as the festival Maidan replaced Bandera, did the “victims of the regime” appear, or the sacred victims of Bandera? - to prove it today is not possible. And the first dead at the hands of Bandera, they have weapon. In western Ukraine, they began to seize administrative power. Thus began the preparation of the Syrian script for Ukraine. But Bandera failed to overthrow the Golden Eagle, even "standing" by order, and the administration in central and eastern Ukraine failed to capture, moreover, eastern Ukraine fought back, began to create the "Ukrainian Front" with the "People's Guard" detachments. And the authorities took up the strengthening of the special forces of the Golden Eagle.

Now Yanukovych is looking for compromises, and offered amnesty to the detainees (about 300 people), but with the conditions for the release of part of the captured administrative buildings. The opposition refused to make any concessions to the authorities, but the attacks on the Berkut ceased. The US Embassy in Ukraine, and behind it, the Bandera thinks the Duma ... It becomes difficult to issue a neo-Nazi insurrection for peaceful protest and “movement to Europe” to its curators from the State Department. So in the street war there was a pause, which lasts at this time.

And time is not working for Bandera and the US State Department, because in the South-East of Ukraine at this time the “Ukrainian Front” is strengthening, which is not united by the figure of Yanukovich, but by the “hatred of fascism,” so say its participants.

The intention of the US State Department to create a “Bandera Ukraine” under its “democratic leadership,” like Sakashvili Georgia, is an adventure. For Biden, from his American is far, that Georgia, that Ukraine is all the same, whereas in reality these are two big differences, as they say in Odessa. If for Kiev 10.000 of fighters is a lot, then for Ukraine it is a miser. Therefore, in Ukraine, the United States will not receive the Syrian scenario, but rather a new failure of its foreign policy. Russia is much closer to Ukraine than to Syria.

And the European commissioners have every chance to get the Orange Spring from the Euro-skeptics at the elections to the European Parliament in May this year for their hypocrisy towards Ukraine, and the support of the Bandera neo-Nazis. May 2014 is much closer than the presidential election in Ukraine ... For Russia, there comes a “moment of truth” in relations with Europe, ”said Sergey Lavrov at the Munich Security Conference in Europe.

“Why is it impossible to hear condemning voices addressed to those who seize and still hold administrative buildings, attack policemen, speak out with racist, anti-Semitic and Nazi slogans? Why do prominent European politicians actually encourage such actions, although at home they immediately and rigidly suppress such deviations from the letter of the law? ”Our Foreign Minister asked, but the answer was silence.

Russia is preparing today for the Olympic Games in Sochi, but what is the West preparing for? ..