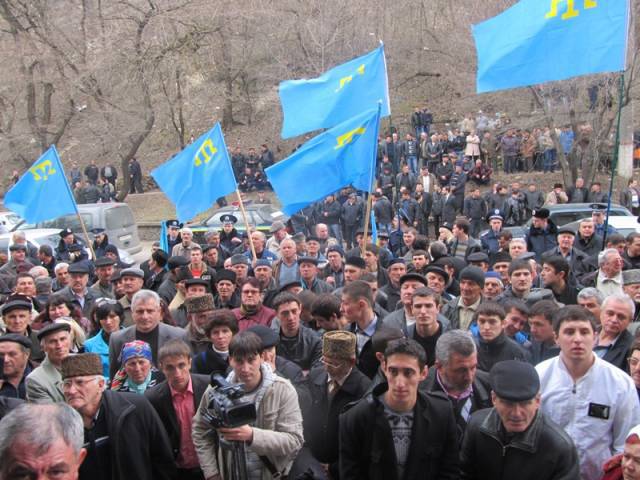 During the years of independence of Ukraine, the Crimean-Tatar nationalist movement gained strength as an anti-Russian force. Today, when among the many events taking place in a large country, Kiev Maidan was turned into event No. 1, the anti-Russian tip of the Crimean Tatar Majlis is turning against the Ukrainian state.

More 1 December 2013 appeared information about the landing of the radical Islamists of the Crimea, heading to the capital of Ukraine to help "euromaidan". The backbone of the "Crimean assault" was made up of war veterans in Syria, who fought there as part of anti-government armed groups. All this time, the deputy chairman of the Majlis of the Crimean Tatar people Ahtem Chiygoz has been engaged in the formation of groups sent to Kiev by buses. On January 28, the Mejlis organized a mass gathering of its supporters in Simferopol in support of the Kiev “euromaidan”, declaring it “an all-Crimean rally against the establishment of a dictatorship in Ukraine”.


Currently, about a thousand Crimean Tatars are active in Kiev, including in the "self-defense units" (the expression itself evokes ominous associations: during the Great Patriotic War, the "self-defense units" of the Tatar nationalists actively helped the occupying German forces in the Crimea "new order ", participating together with the Germans in the extermination of tens of thousands of Russians, Ukrainians, Jews, Greeks and other civilians in the Crimea).

In the emergence of "euromaidan" as weapons politicizing radical Islamists from the Majlis saw their great chance ... Chairman of the Majlis of the Crimean Tatar people Refat Chubarov desperately spurs the events: “After blood was shed, no one’s tactical concessions he does not pay off ... Under the feet of the authorities, the land began to burn, and in fact the popular uprising went through the regions ... - the leader of the Majlis proclaimed in his January 28 interview. “I believe that this revolutionary storm will clear Ukraine.”

Behind the instigating appeals of the “petrel of the revolution”, things follow
At present, the leadership of the Mejlis plans to double the Crimean Tatar "contingent" in the zone of unrest in Kiev and to increase the participation of its activists in anti-government speeches, primarily at the expense of student youth. The financial support of the Crimean-Tatar “reinforcements” sent to help “euromaidan” is taken over by the leadership of the Majlis.

In turn, the Committee of National Resistance "euromaidan" promised the Crimean Tatars full assistance. In a sense, there is some kind of relapse. It testifies to the short memory of the Crimean Tatar leaders, who were left with the nose of the model 2004 of the year, despite any agreement, or the readiness of the leaders of anti-government forces to use even Islamists to overthrow the legitimate government. At the same time, according to some Crimean observers, the price of the active participation of the Crimean Tatar nationalists in the operation to overthrow the existing regime in the country is not yet fully agreed with the “three-headed” opposition and, most importantly, with foreign patrons (such coordination is underway, about what the visit of one of the leaders of the Majlis to Brussels and Berlin in late January says).

As you might guess, the sentiments of the Crimean Tatar youth, this tidy acquisition of Turkish universities, controlled not only by Turkic theologians, are not radicalized at all so that Ukrainian champions of European integration could hold gay parades on Yalta beach or Kiev Maidan. And the future of Crimea from Washington, for example, is seen in a completely different way than, say, from Beijing. Or from Warsaw, for which the priority of the activities of its NGOs, diplomatic representatives and public organizations in Crimea is cooperation with the Crimean Tatar Mejlis and the discrediting of the Russian movement. Not to mention Ankara, proceeding from the fact that in Turkey there are more than three million Tatars who consider Crimea their "historical ancestral home ”(this is more than the entire current population of the peninsula).

So while in Kiev Maidan they drool towards the European Union and bullets at the policemen, Tatar nationalists in Crimea, counting on the support of NATO, are preparing to speak openly, turning the exposed sociopolitical contradictions of Ukrainian society into an inter-ethnic war on the Kosovo variant. The targets of their speech are defined: relying on the support of the “overlords of Maidan”, proclaim Tatar territorial autonomy within the Autonomous Republic of Crimea, then transform territorial autonomy into national, then proclaim its sovereignty, and so on - until the Crimea is separated.