Optical-electronic systems for the French fleet 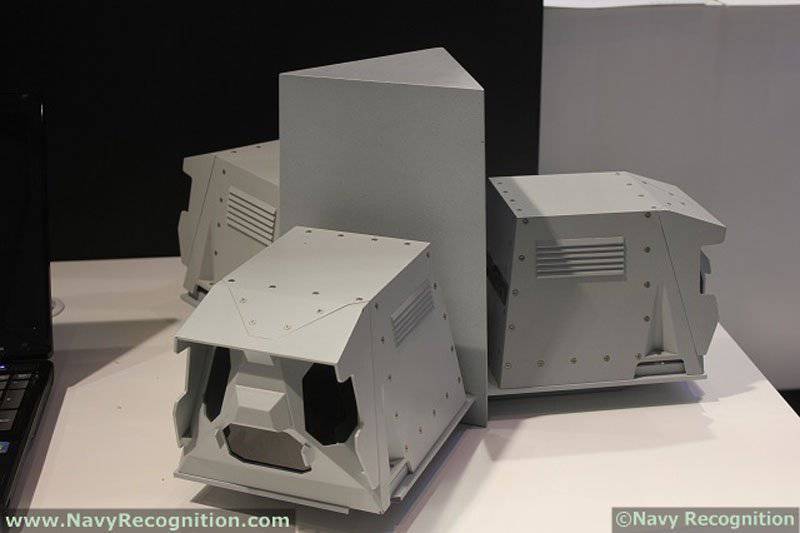 Infrared search and tracking system ARTEMIS with a distributed aperture, developed by Thales, uses three sensor blocks mounted on the mast or deck superstructures to get a circular view 360 ° in azimuth

For a long time, the French fleet has been recognized as a technological pioneer and leader in the operation of so-called "optronic" (optical-electronic) sensor systems on surface ships. This история It began with a feasibility study of optoelectronic and infrared (OE / IR) devices at the end of the 60s, followed by test samples in the middle of the 70s.

Several prototypes have been manufactured and tested from 1975 to 1980: infrared search and tracking system (IPSS, the English abbreviation IRST - infrared search and track system) with two frequency bands (3-5 and 8-12 microns), a dual-band tracking device and a single-band differential tracking device. As a result, it was decided to conclude a contract with the then-company Societe Anonyme des Telecommunications (SAT) to develop all three types of operational equipment: DIBV-1A VAMPIR (single-band dual-band scanning IPSS, optimized for the search for anti-ship cruise missiles in sight); DIBC-1A PIRANA (dual-band tracking device) of the same company; and the SEID (Systeme d'ecartometrie infrarouge differentielle) multipurpose differential tracking device installed to enhance the performance of the high-precision Crotale missile system against low-flying targets.

At that time, a lot of attention was paid to the “traditional” threats of the Cold War and the French Navy viewed as an integral complement to the radar in surface combat, OE / IR sensors, noting their high resolution, ability to perform positive identification of objects day and night, excellent angular measurements, very good performance against low-flying targets and high resistance to interference. In addition, the passive mode of operation allowed them to be used in situations of limited electromagnetic radiation intensity, and their compact and lightweight installations simplified integration into existing platforms.

The next allocation of funds occurred in the middle of the 90-ies, when the Navy identified the need to upgrade the capabilities of self-defense on its F 70 frigates and a number of other significant ships. The result is a program of modernization OP3A (Operation d'Amelioration de 1'Autodefense Antimissiles - modernization project of missile defense) in accordance with which were integrated EO / IR sensors (modular Bispectral IPSS VAMPIR MB and the second-generation optoelectronic detectors VIGY 105) with mini-system battle in order to increase situational awareness and reduce the time to capture a target with weapons. The VAMPIR MB and VIGY 105 sensors were developed and manufactured by Sagem Defense Securite (part of the Safran group) into which SAT joined the 1998 year. 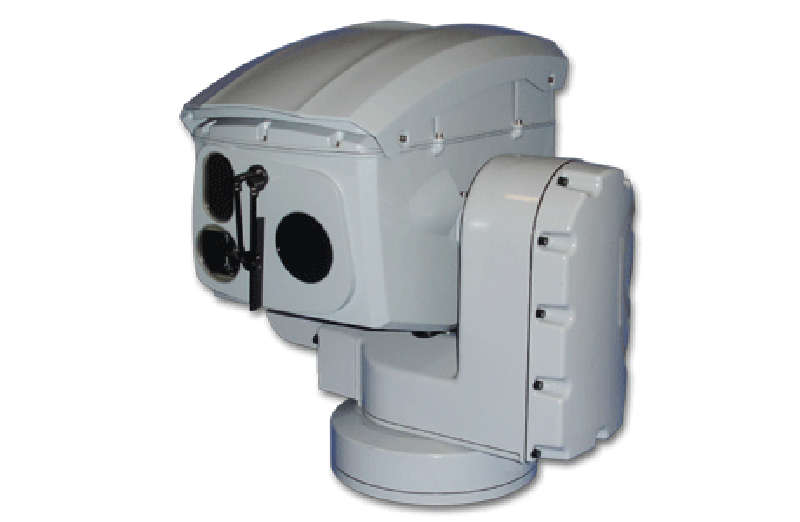 Years passed and at the end of 2012, the French fleet again relies on OE / IR sensor systems to meet the needs of the entire surface fleet in naval self-defense, in fire control and general situational awareness. This is confirmed by the accelerated introduction of new equipment in the fleet, including military ready-made solutions for emergency tasks, such as ensuring maritime security and the fight against piracy. 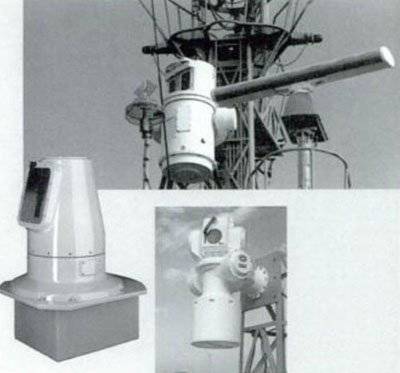 The French fleet can claim to be the pioneer in the use of the IPSS at sea and, although the first generation DIBV-1A VAMPIR has been removed from service (installed on F70 Cassard and Jean Bart air defense frigates), the next DIBV-2 A model VAMPIR MB continues to serve on board F70 frigates Dupleix, Montcalm and Jean de Vienne (as part of the OP3A kit), the Forbin and Chevalier Paul frigates and the Charles de Gaulle aircraft carrier.

Further development of the VAMPIR line under the designation VAMPIR NG (Nouvelle Generation - a new generation) was subsequently also presented on the market. This system, in which the bispectral configuration is replaced by a single 3-5 micron high-resolution thermal imager, including an improved video converter matrix and an improved signal processing process, has achieved significant export success. Australia bought 29 of such systems for installation on the main surface combat ships and landing ships.

However, when VAMPIR NG from Sagem entered the French Aquaine class frigates of the French Navy in October 2005, it gave way to its rival, ARTEMIS (Advanced Reliable Third-Generation Electro-Multiplexing Infrared Search and track), advanced reliable electronic-optical multiplex search and third generation accompaniment) proposed by Thales. ARTEMIS (the first two photos) is a completely different type of IPSS with architecture based on distributed image brightness amplifiers, and as soon as the French fleet received the first generation of scanning IPSS, it again became the leader in implementing the image brightness enhancement technology.

A full contract for the development, production and support was issued to Thales in December 2005 for the delivery of eight systems (to equip the first batch of Aquitaine frigates) and a five-year comprehensive logistical support. The next contract for the supply of three additional systems was signed by Thales and DCNS at the end of 2009.

ARTEMIS consists of three sensor units (each weighing 27 kg) mounted on the mast or top of deck superstructures and providing 360 ° all-round viewing in azimuth, each of which is connected to the central signal processing unit with an optical fiber cable. Each sensor unit has an infrared camera with a resolution of 3-5 microns covering the sector 120 ° in azimuth and 25 ° in elevation with the update frequency 10 Hz.

Integrated electronic image stabilization eliminates the mechanical stabilizing system inside the sensor heads. In addition, a wide field of view in the vertical plane guarantees a good spatial view along the vertical, even taking into account the roll compensation in case of strong seas.

The requirement for a wide field of view and high refresh rate without increasing the cost associated with installing multiple cameras in each sensor unit was decided by innovative optical designs, which use a combination of prismatic mirrors to divide the spatial viewing sector into six optical channels (each covers 20 ° in azimuth and 25 ° in elevation). The output is then projected onto a large matrix of video transducer (640 x 512 pixels), installed on the periscope and rotating through each of the six 10 optical channels once per second to get the 10 Hz update frequency.

Basic image processing — irregularity correction and control of a panoramic IR sensor — is performed in the sensor head. The IR video is then sent to the central processor for dual-channel processing: one channel performs advanced detection and tracking algorithms to perform spatial merging of the target mark and tracking data, suppress passive interference and pre-classification; the other uses visualization algorithms to create a panoramic video in real time.

Algorithms of determination (formation of the target mark) are based on the method of multi-window analysis using adaptive sensitivity thresholds for suppressing passive interference and local selection. The final scenarios are further processed using three different types of tracking algorithms.

After testing, the first ARTEMIS system was installed on the ground test stand at St Mandrier in December 2010 of the year. The hardware for the first Aquitaine-class ship arrived at the DCNS Lorient shipyard at the end of September 2010, and in November 2012, after acceptance testing, the ship was handed over to the French Navy. 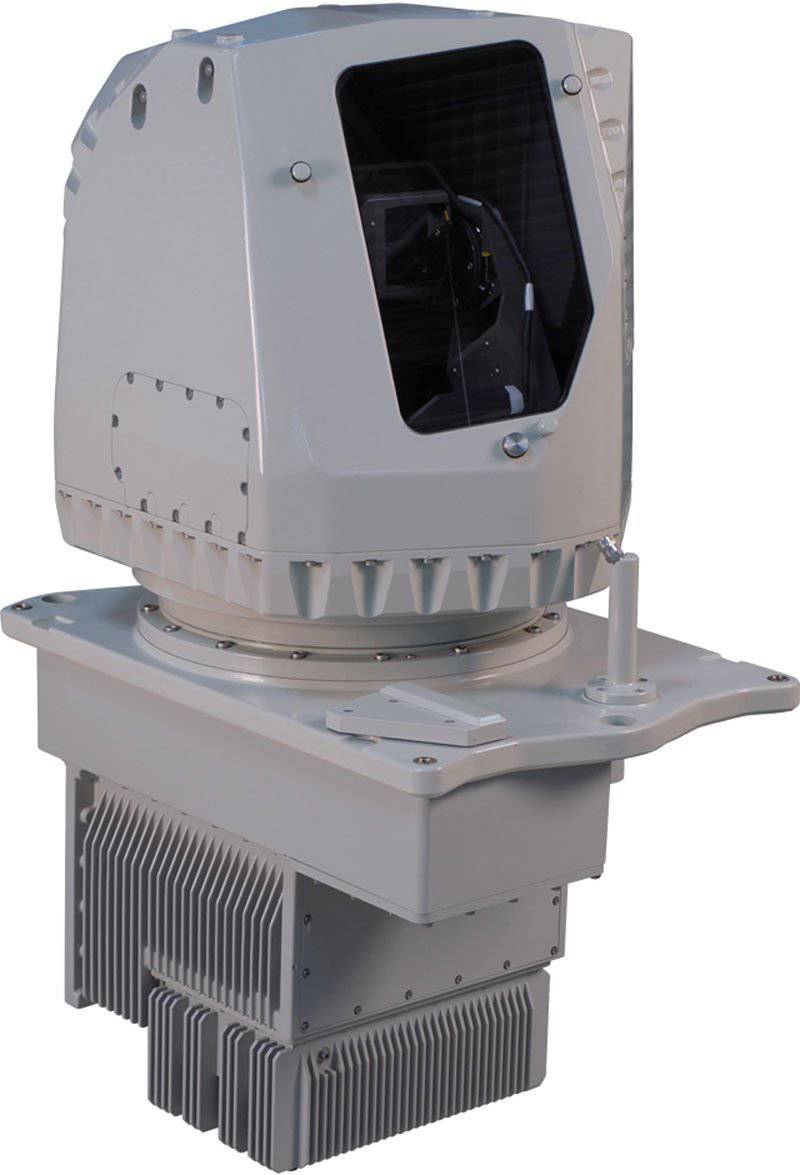 Despite the fact that Sagem has failed with the VAMPIR NG system in the domestic market, it has recently achieved success here with its new-generation EOMS-NG Electro-Optical Multifunction System (Electro-Optical Multifunction System). EOMS-NG is another ready-made product that was originally designed to meet the needs of the export market. The system is a compact single-head unit that combines the functions of the panoramic IPSS and the OE fire control system.

In 2009, Sagem agreed to lease the DCNS one EOMS-NG system for installation on board the experienced coastal patrol vessel Gowind L'Adroit (currently in a three-year lease from the French fleet). However, a more substantial order came at the beginning of 2012, when EOMS-NG was selected by DCNS (acting as contracting organization on behalf of the Armaments Directorate [DGA]) to upgrade the fire control system of six Floreal reconnaissance frigates.

The EOMS-NG system replaces the Najir optocoupler system, it will provide fire control for the Floreal class French naval guns 100-mm guns, as well as improve tactical situational awareness and increase the level of ship protection. A special workstation must be installed in the location center of each ship; The first installation was completed at the end of 2012.

Another French company, HGH Infrared Systems, was awarded the contract in 2009 for the supply of a panoramic Vigiscan infrared surveillance system to upgrade French frigates of the class La Fayette fighting pirates in the Gulf of Aden without much fuss. This was a response to urgent operational requirements for a high-resolution, all-weather, round-the-clock thermal imaging system for detecting small boats with low radar signatures. 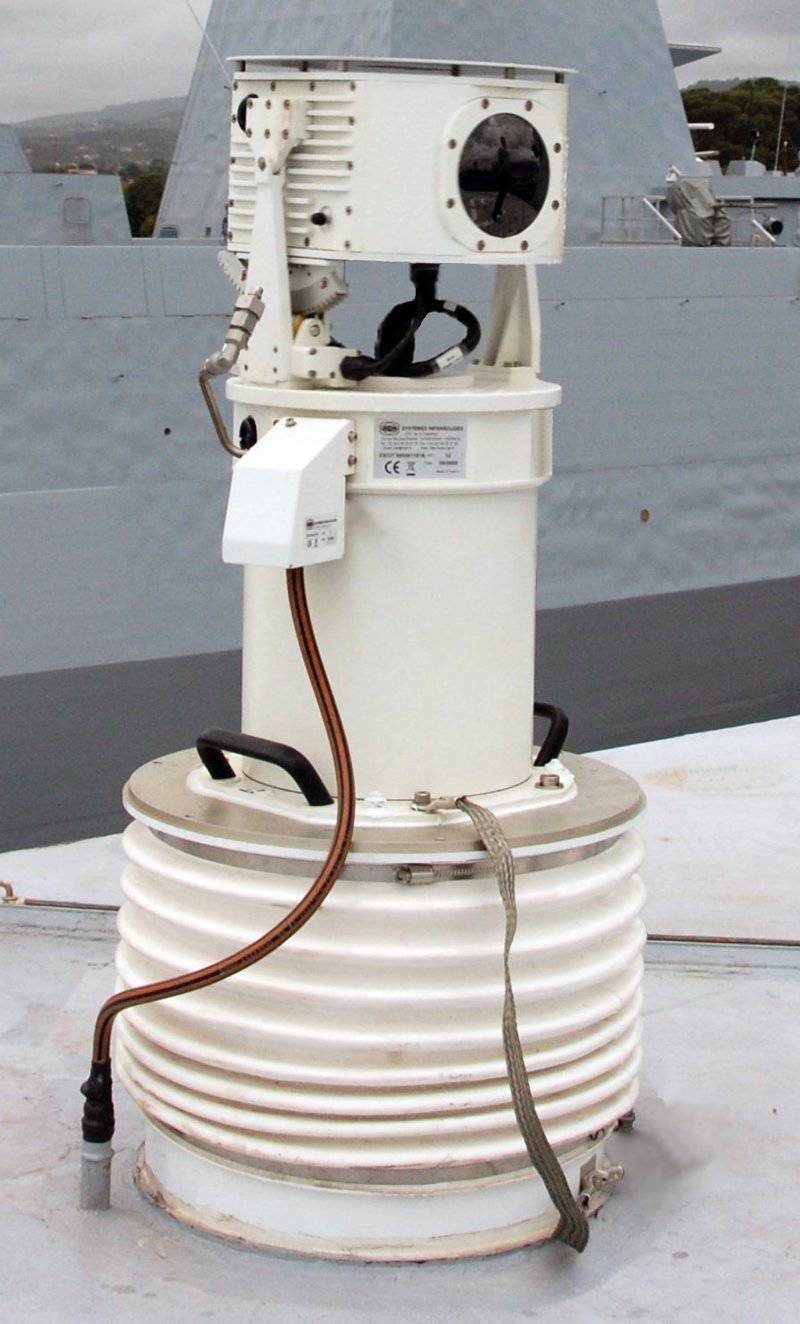 Vigiscan essentially functions as an “optical radar” using a continuously rotating single-scan sensor to generate a real-time panoramic 360 ° image. In order to compensate for the ship’s pitching, the Vigiscan is installed on a special gyro-stabilized mast platform, while it can retain its characteristics in conditions of sea state above 2 - 4 meters. Such a solution, combined with a special image processing algorithm and integrated with the inertial navigation system of the ship, is guaranteed to provide accurate positioning and tracking data.

The low frequency of false alarms is another distinguishing feature of the complex. An assessment of the Vigiscan system confirmed that this frequency corresponds to the required threshold values ​​of the parameters, and the sun glare does not affect the long-wave sensor.

In actual operation (in a hot climate, day and night, on the move), the system demonstrated fast (1 - 2 seconds) detection of small boats within a radius of 12 km. HGH Infrared Systems stated that the Vigiscan system, along with its excellent performance and low frequency of false alarms, was also chosen because of its affordability, low cost of ownership, reliability and compactness of the installation on the ship with a minimum bearing surface.

The very urgent need to meet urgent surveillance requirements at sea forced DCNS in January 2011 to issue a contract to British company Chess Dynamics worth over two million euros to supply Sea Cobra's stabilized OE / IR monitoring and tracking system. Due to urgency, this complex did not even have to compete with competing systems from Europe and the USA. Chess Dynamics has deployed nine Sea Cobra systems to rotate between nine A69 Aviso class supply vessels and four Durance classes to support shore patrols, security operations and anti-piracy operations around the world. The first set was completed in September 2011. 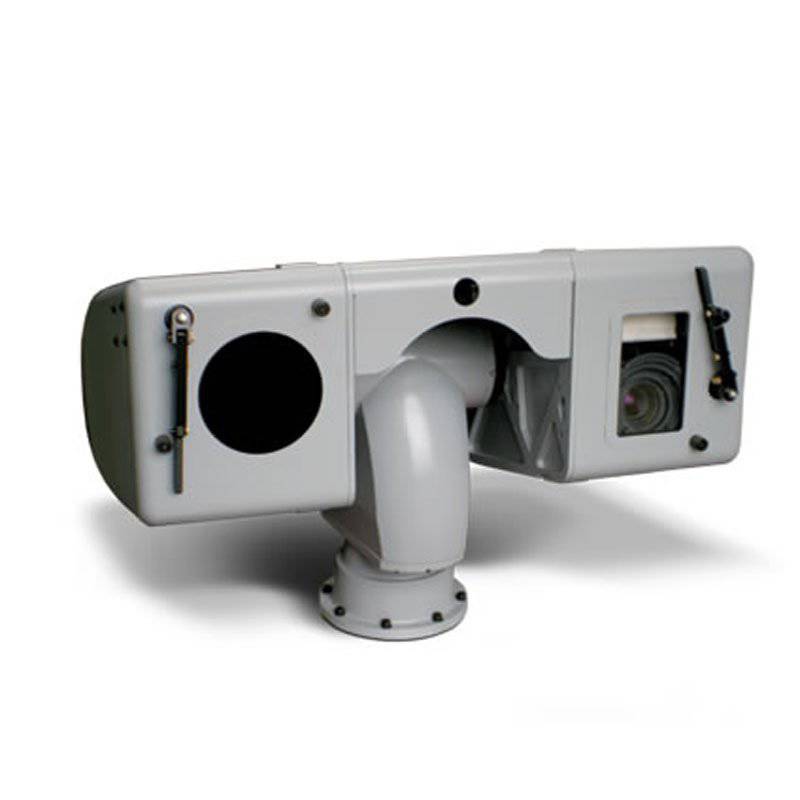 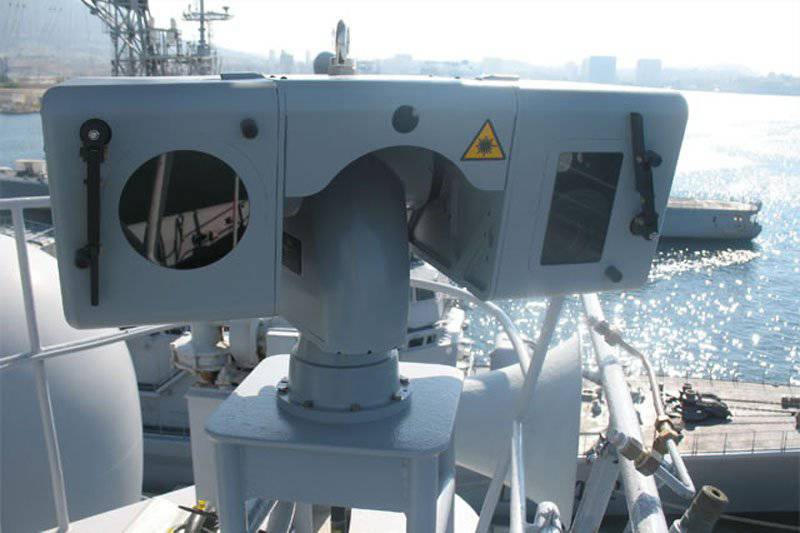 Chess Dynamics has installed its Sea Cobra stabilized OE / IR surveillance and tracking system to meet the immediate requirements for an improved marine surveillance system. The installation of the first system was completed in September 2011.

Ctrl Enter
Noticed oshЫbku Highlight text and press. Ctrl + Enter
We are
About the future of underwater roboticsRaise the periscope!
Military Reviewin Yandex News
Military Reviewin Google News
1 comment
Information
Dear reader, to leave comments on the publication, you must sign in.