Marshal of the Soviet Union Vasily Petrov, died at 98-th year of life 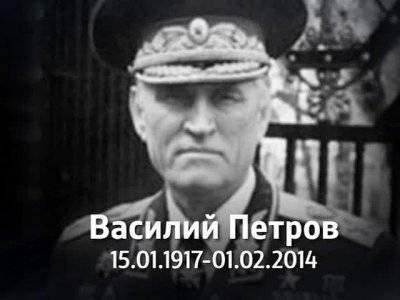 On Saturday, February 1, Marshal of the Soviet Union Vasily Petrov passed away in Moscow at the 98 year of life. After the death of Petrov, Hero of the Soviet Union, only one Marshal of the Soviet Union remained in Russia - Dmitry Yazov.
Vasily Ivanovich Petrov was born 2 (15) in January 1917, in the village of Chernolesskoye in the Stavropol region. He graduated from high school, as well as two courses Ordzhonikidzevskogo Pedagogical Institute. Since 1939, Vasily Petrov in the army. In 1941, he took command of a cavalry platoon, in 1942-43. commanded a battalion of machine gunners, was the deputy chief of staff of the motorized rifle brigade, reminds agency "Interfax". Vasily Petrov, a member of the defense of Odessa, Sevastopol and the Caucasus, liberated Ukraine, forced the Dnieper and the Dniester, and fought in Romania and Hungary.
After World War II, Vasily Petrov graduated from the Frunze Military Academy and the Higher Academic Courses at the Academy of the General Staff. Commanded a regiment, division, army, from 1972 to 1975, he was commander of the Far Eastern Military District.
During the Ethiopian-Somali war (1977-1978 years), Vasily Petrov headed the task force of the USSR Ministry of Defense in Ethiopia and was engaged in planning combat operations for the Ethiopian troops. From December 1978 to November 1980, he served as Commander-in-Chief of the Far East. From November 1980 to January 1985, Vasily Petrov - Commander-in-Chief of the Land Forces - Deputy Minister of Defense of the USSR, and from January 1985 to July 1986 - First Deputy Minister of Defense of the USSR.
By decree of the Presidium of the Supreme Soviet of the USSR from 16 February 1982, Vasily Petrov was awarded the title Hero of the Soviet Union, in 1983 he was awarded the title of Marshal of the Soviet Union.
Vasily Petrov was awarded many orders and medals, including four orders of Lenin, two orders of the Patriotic War I degree, the Order of the Patriotic War II degree, two orders of the Red Star, the Order of Alexander Nevsky, as well as orders and medals of foreign states. The last 20 years Vasily Petrov served as adviser to the Ministry of Defense of Russia.