Another reason for striking Libya is the elimination of the Western Embryo project of an alternative project for Africa. 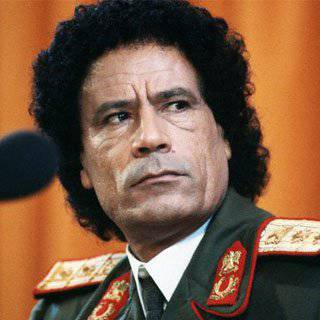 Gaddafi, in spite of all his flaws, created a very interesting project, a synthesis of Islam and socialism, with the leader playing a huge role - the Jamahiriya.

Help: Jamahiriya - a form of social and state structure, different from the monarchy and the republic, based on the Third World Theory of Muammar Gaddafi. The word itself can be translated as “people’s rule”, a neologism formed by replacing the word “Jumhuria” (republic) with the singular “Jumhur” (people) with the plural “Jamahir” (mass). Libya is proclaimed Jamahiriya 2 March 1977 of the year. In the Jamahiriya, traditional institutions of power are abolished. Everywhere formed people's committees and national congresses. The state is divided into many communes, which are self-governing mini-states in the state, with full power in their district, including the allocation of budget funds. The commune is governed by a primary national congress. The people's congress includes all members of the commune (that is, residents of the commune). Every person has the right to express his proposal at a meeting of the people's committee. Everyone is involved in decision making and the realization of power. The state is a federation of communes. Each primary people's congress elects its representatives to the city people's committee and the General People's Congress. In the government of the Socialist People’s Libyan Arab Jamahiriya, the entire adult population of the country participates in primary (main) people's congresses. The people's congresses select their own executive bodies (people's committees), whose members automatically become delegates to the provincial people's congresses. The General People’s Congress, the highest legislative body of the Socialist People’s Libyan Arab Jamahiriya, has the right to include on its agenda only the issues discussed at the primary national congresses. The “Charter of Revolutionary Law”, adopted by the General People’s Congress of Libya in 1990, granted broad foreign policy authority to the leader of the revolution, Muammar Gaddafi, who does not hold official posts in the state.

This project could become the basis of a united Africa, Gaddafi was one of the leaders who pursued a policy of uniting African countries into a single whole. This would have a tremendous effect, numerous corrupt pro-Western elites would be destroyed, which are oriented towards Paris (French Africa), Washington, London, some are already under the influence of the PRC. With this project, Gaddafi could "smash the soil" from the mass of transnational corporations and transnational banks that "feed" on Africa.

Indeed, in Libya, the Colonel was able to create a society with the highest standard of living in Africa: where young families were given more than 64 thousand dollars to buy housing (commissioning such a program in Russia could fundamentally change the deplorable situation with childbirth), besides, the state pays 1 thousand dollars a year to each family member. grants, for each newborn 7 thousand dollars are paid. Education and medicine are free (remembering the USSR), education and internship abroad - at the expense of the state, for opening an individual business one-time financial assistance - 20 thousand dollars. There is no payment for the apartment, for electricity. “Dry law” that would not hurt us, given the accelerated degradation of the nation. Zero loans for the purchase of an apartment and a car. When buying a car, the government pays half the amount and a lot of other similar facts.

I think that the Russian president-ruler, who would have carried out such reforms, would have loved him like a “native father”.

In addition, Gaddafi was able without the support of the West since 1983 of the year (when the project was created) deliver water from the southern part of Libya, where the underwater lakes are located, to the northern, industrial part of Libya. And the water in the desert, which is most of Libya, except the coast, that's all. In 1996, artesian water came to the houses of the capital Tripoli. This water project was called the “Eighth Wonder of the World” by its scale - 4 is thousands of kilometers of pipes buried deep in the earth from the heat. With this project, Gaddafi made it possible to dramatically increase the capacity of local agriculture. Scientists estimate water reserves equivalent to two hundred years of the flow of the Nile River!

Colonel created and another threat to the Western project - he proposed to create his own monetary system in Africa, on gold collateral. In this way he dealt a terrible blow to the basis of the power of “Koshchei” - the financial network of the West, the dollar and the euro.

Gaddafi, as can be seen from the results of his activities, not only proposed, but also Delal. He could lead the process of true liberation of the Black Continent from the “web” of the West, this Western world could not allow. Therefore, Paris and London became the main instigators of a strike on it and their influence in Africa (especially France) could have been lost.

Honor and praise him now he is the personification of the Resistance to the Western project of parasitism. A rare example of personality.