Better to see once than hear a hundred times 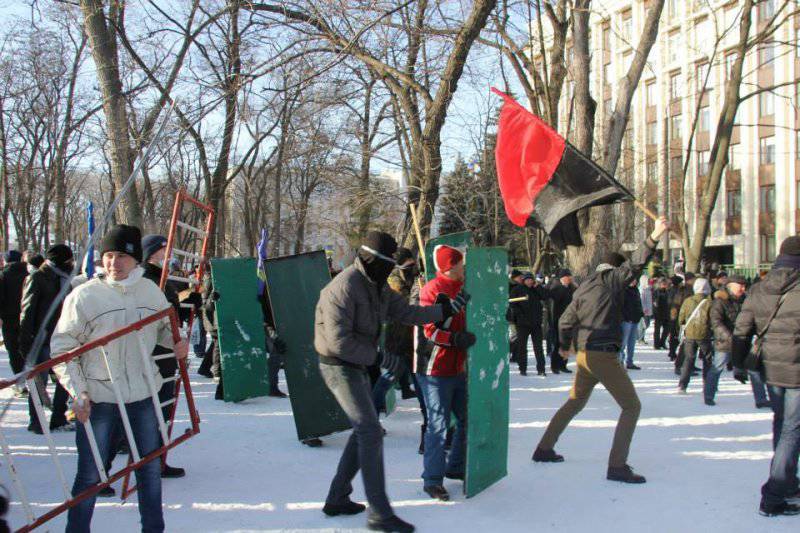 This is probably my shortest note. However, after it there will be a lot of questions. The video, which is located below, can be interpreted in different ways. Someone will say that this is a conflict between two political trends ("for" Yanukovych and "against"), and I, for example, see completely different things. There is one political protest movement representing Bandera’s ideology and the ideals of Europe, which, unfortunately, has saddled social protest. I have often been written in comments that I am exaggerating the problem of the disappearance of the Russian ethnos in south-eastern Ukraine. Guys, I'm happy in the square, if I am mistaken !!

When I began to notice more than a year ago that in the city of Berdyansk (Zaporozhye region), which was founded by the Russians on the orders of Count M. Vorontsov in 1827, Russian-speaking russophobes dominate the Internet space, I startled. I consoled myself with the thought that, since the city had lost almost all industry in 90 and had taken up the resort direction, easy money contributed to the growth of liberal hamsters. Anyway, the weather is made by the neighboring half-million proletarian Mariupol. But, much to my chagrin, the de-russification of the consciousness of Russian-speaking Ukrainians and Russians also touched large cities, first of all the local environment of students, high school and football movements in Eastern Ukraine.

Here is a video that makes you shiver. Many Russians, who see this video on YouTube, at first think that the brave Russian-speaking guys are kicking Bandera. But it's not like that at all ...

Young people who belong to the Dnipropetrovsk football movement "Ultras" (FC Dnipro) beat "aunts" in the evening - young guys who stood for someone in support of Yanukovych, and according to others - in support of the state system. From the RSA. Before that, in the afternoon, they successfully beat off the “Euro-Banderians” RSA with the police, and Dnepropetrovsk did not fall, but some people wanted a rematch.

As you understand, events take place in the Russian-speaking city of Dnipropetrovsk, where they make rockets and other high-tech products. On video everywhere Russian speech. Russian beat Russian (if you look through the eyes of a foreigner who knows Russian). One would like to say to the Russian-speaking Ukrainians and Russians who swore Bandera and Europe in the football stadiums of Ukraine: go to the Ukrainian language! Observe the front line! Integration must be through. Do not disgrace the real Russian people. We are not Egypt or Tunisia to beat each other with sticks. We first flew into space! (There are no rockets in Galicia.) The critics will tell me that this is still a political conflict, and not an ideological one. But forgive me, Yanukovych is also damn disgusting to me, so now I can be shoulder to shoulder with a Bandera ?! Moreover, the protest officially goes under the sauce: "Ukraine is Europe." The European choice also saddled social protest, as we see. Yanukovych thus turned out to be a Trojan horse for the Russian world.

Ctrl Enter
Noticed oshЫbku Highlight text and press. Ctrl + Enter
We are
A great interview with Sergey Lavrov: about Ukraine, Obama and IranWhat you didn't want to know about England
Military Reviewin Yandex News
Military Reviewin Google News
122 comments
Information
Dear reader, to leave comments on the publication, you must sign in.