The myth of the "Ukrainian Thermopylae"

February 1 2014
61
January 29 The 1918 of the year was a minor episode of the civil war - a battle at Kruty between the forces of the Central Rada and the detachments of the red soldiers, sailors and Red Guard workers. The latter went to the aid of the workers of the insurgent Arsenal, who at that moment were shot by the Petliurists.

I do not know why and who needs it,
Who sent them to death with a naughty hand?
Only so mercilessly, so evil and unnecessary
Dropped them into Eternal Peace!
A. Vertinsky

The battle of Kruty, like no other event of the revolution and civil war in Ukraine, generated an unprecedented amount of myths. Over time, the basis of the mythologeme crystallized: Kruty is the “Ukrainian Thermopylae”. Historical reality was dissolved in the myth of 300 students who took the battle with the "Bolshevik hordes" and almost all died. 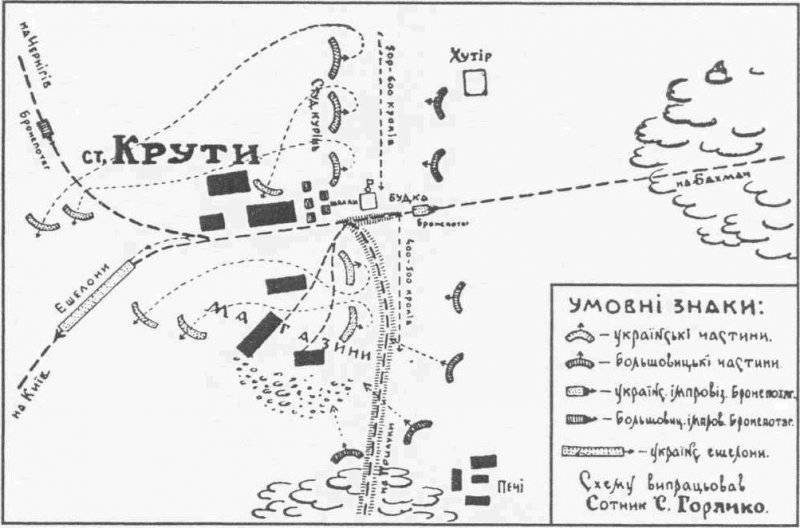 The Battle of Thermopylae itself has long turned into a colossal myth and is perceived by many through the prism of the American comic book, filmed in the movie "300 of the Spartans." This episode of the Greek-Persian wars 480 BC. e. went down in history as an example of rare courage and self-sacrifice. Against the 200-250-thousandth army of the Persian king, the Greek cities were able to expose, according to various sources, from 5200 to 7700 people. Their main task was to delay the advance of the Persian army into the territory of Hellas. With the defense of the narrow Thermopilsky passage, the Greeks could hope to solve this strategic task. Having located their forces in the narrowest places on the path of the Persian army, they leveled the numerical superiority of the enemy. After the traitor led the Persians to the rear, most Greeks retreated. The remaining detachment (about 500 people, including about 300 Spartans led by Tsar Leonid) heroically died, but made it possible for the rest of the army to retreat.

The battle of Thermopylae is one of the most famous battles of antiquity. When describing it, first of all emphasize the valor and courage of the Spartans. However, it became a heavy defeat for the Greeks. The path to the Persians in central Greece was opened. However, the sacrifice of the Spartans was not fruitless. It served as an example for the Greeks and shook the Persians' confidence in victory.

And yet, not 300 noble Spartans under Thermopylae, but the Athenian fleet, manned from the lowest qualified group of citizens - the Fet, played a decisive role in the expulsion of the aggressor. But it so happened that the feat of the Spartans remained for centuries, and the names of the Athenian Fet did not reach us. In less than 10 years, as the leader of the Popular Party and the creator of the Athenian fleet Themistocles was expelled from his hometown.

The situation of January 1918 was a little reminiscent of the events of the Greco-Persian Wars. There was no invasion of the Bolsheviks. The authoritative diasporic historian Ivan Lisyak-Rudnytsky noted: “The legend that needs to be handed over to the archive is a fairy tale about the“ super-numerous hordes ”of enemies, under the blows of which Ukrainian statehood allegedly fell.” The main blow of the red troops brought down on the counter-revolutionary Don. The total number of troops advancing on Kiev, according to various estimates, ranged from 6 to 10 thousand. It was not a regular army, but detachments of soldiers, sailors and Red Guard workers, red Cossacks. The existing system of electing commanders and division of units according to party affiliation did not add combat capability. Georgy Lapchinsky, a member of the Soviet government of Ukraine, described the Red fighters as follows: “The warriors were fancy dressed, completely undisciplined people, hung with various weapons, rifles, sabers, revolvers of all systems and bombs. The fighting capacity of this army for me has been and remains very doubtful to this day. But she successfully moved forward, since the enemy was completely demoralized. ”

In contrast to the ancient Greeks, no patriotic upsurge was observed among Ukrainians: they did not see in the Soviet government the threat of enslavement, “Soviet occupation”, which some contemporaries say. The Central Rada had at its disposal up to 15 thousand soldiers. In Kiev, there were up to 20 thousand military. Almost all Ukrainian parts and shelves at the decisive moment refused to support the Parliament. Many of them have declared their neutrality. The British Soviet expert, Edward Carr, noted that at this stage the Ukrainian national movement did not evoke a wide response from either the peasants or the industrial workers. Not so much power remained under the control of the Central Rada: Haydamatsky Kosh of Sloboda Ukraine Simon Petlyura, Sich archers — former Galician prisoners of war, the Haydamatsky regiment to them. K. Gordienko and a number of small parts. According to Valery Soldatenko, Doctor of Historical Sciences, around the Central Rada at the end of 1917 — the beginning of 1918. created a vacuum. The population of Ukraine en masse joined the Red Guard detachments.

It was a strange, "echelon" war: military forces were concentrated along the railways. Red troops attacked Kiev with two groups of railways: Kharkov - Poltava - Kiev and Kursk - Bakhmach - Kiev. Vladimir Vinnichenko called this war a “war of influence”. “Our influence,” the head of the Central Rada government noted, “was less. It was already so small that with great difficulty we could make up some small more or less disciplined parts and send them against the Bolsheviks. The Bolsheviks, to be sure, also did not have large disciplined units, but their advantage was that all our broad masses of soldiers did not offer them any resistance, or even came over to their side, that almost all the workers of each city stood for them; that in the villages the rural poor were clearly Bolshevik; that, in a word, the vast majority of the Ukrainian population itself was against us. " Prior to major military action is not reached. As a rule, with the approach of the Reds, an uprising of workers arose in the city, and the local garrison declared neutrality or switched to the side of the Bolsheviks.

The promises of the Central Rada were believed only by the most trusting and politically unsophisticated part of Ukrainian society - the youth. 11 January 1918 was the newspaper of the Ukrainian Socialist-Federalist Party (the bourgeois party that appropriated the name of the socialist) “Novaya Rada” published a call for students to sign up for the Sich Riflemen. 18 January at a meeting of students of Kiev University and the Ukrainian People’s University was announced a record of volunteers. They were joined by students of the 2-th Ukrainian Gymnasium named after the Cyril and Methodius Brotherhood. In total, about 200 people who had completed initial military training for several days signed up. Initially, Kuren was created as an auxiliary military unit for the guard service in Kiev. To date, historians have not been able to figure out how untrained students came to the front.

There is a version that the students left for the front without permission at the request of the junkers, who, without receiving reinforcements, held positions in the Bakhmach area and sent a delegation to Kiev from despair. It was possible to persuade only students who arrived in the area of ​​the railway station Kruty. Bakhmach had already been delivered by that time.

The correlation of forces on the eve of the battle, which began on the morning of January 29, was as follows: the cadets of junkers (400-500 people) and a hundred student smokers (116-130 people) against several thousand Red Guards, soldiers and sailors. The fight itself was vividly described by the historian and politician Dmitry Doroshenko: “The unfortunate youth were taken to the station Kruty and landed here at the“ position ”. At a time when the young men (mostly never holding a gun in their hands) bravely entered the battle against the Bolshevik detachments, their commanders, a group of officers, remained on the train and organized drunken carriages; the Bolsheviks easily defeated a detachment of young people and drove him from the station. Noticing the danger that the command in the train quickly gave the signal to leave the train, not stopping for a minute to take the runners with them. ”

The Battle of Kruty did not attract the attention of contemporaries. However, with the return of the Central Council in March of 1918, relatives and friends of the victims raised the question of reburial. Doctor of Historical Sciences Vladislav Verstiuk explains that the battle near Kruty has become widely known due to the participation of a number of famous people, including the brother of the Foreign Minister of the UPR A. Shulgin. A scandalous publication appeared in the press accusing the leadership of the Central Rada of the deaths of young men.

And an experienced politician, Mikhail Hrushevsky, played in advance - a ceremonial reburial was organized. The losses claimed by Averky Goncharenko, who commanded the junkers (later served in the SS division “Galicia”) in 280 people, were not confirmed. Contrary to allegations of students being shot by 27, only 17 bodies were found that were buried at Askold's grave. Although originally prepared 200 coffins. The rest, apparently, fled. 8 injured prisoners were sent to Kharkov for treatment.

According to V. Soldatenko, in the absence of other vivid examples of the manifestation of national self-consciousness and sacrifice, the battle at Kruty is becoming increasingly active, implementing educational activities, especially among young people. At the same time, the workers of Arsenal, who fought for their rights, are exposed as “Moscow invaders”, “fifth column”. Although Ukrainian and Russian workers fought side by side for social justice and the right of peoples to self-determination.

The Battle of Kruty did not solve any military tasks. She did not stop the advance of the Red troops and did not cause a general patriotic upsurge among the population. But she gave the possibility to the Petliurists to cruelly deal with the rebel arsenalians, which, however, did not save the Central Rada. The attempt to return on bayonets of the Germans and Austro-Hungarians, which in modern textbooks is often bashfully called “international recognition of Ukraine”, once again proved the unviability of its power.

Ukraine has its Thermopylae

In fact, the “Ukrainian Thermopylae” exist, but they are not related to the events of 1918, but to the times of the national liberation war of the Ukrainian people under the leadership of Bogdan Khmelnitsky. During the battle of Berestechko in the summer of 1651, which ended with the defeat of the Cossacks, an episode occurred resembling the 300 feat of the Spartans.

An eyewitness to the events of the Frenchman Pierre Chevalier wrote: “In one place in the middle of the swamp, 300 Cossacks gathered and bravely defended themselves against a large number of attackers, who were pressing at them from everywhere; in order to prove their contempt for life, which they promised to give, and for everything valuable except life, they pulled all the money out of their pockets and belts and threw them into the water. 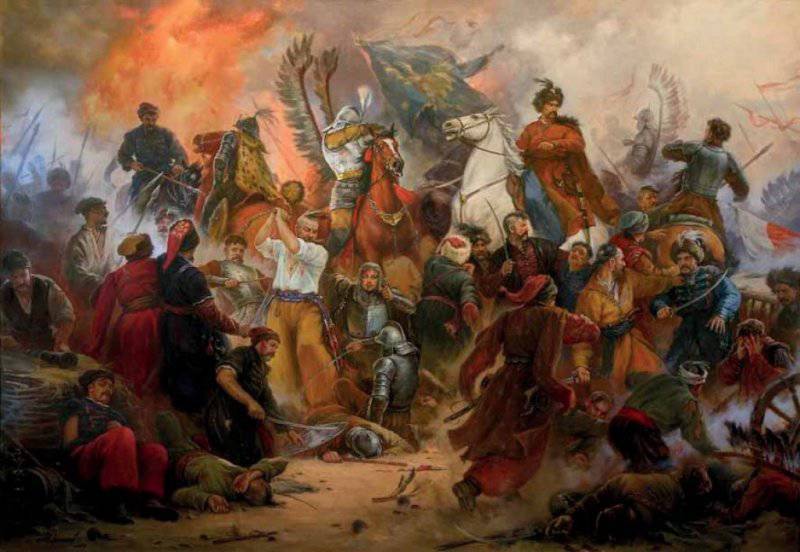 Finally, completely surrounded, they almost all died, but they had to fight with each of them. Left alone, beating against the entire Polish army, he found a boat on a swamp lake and, hiding behind her side, withstood the shooting of the Poles against him; having spent all the powder, he then took his scythe, which he beat off all those who wanted to grab him ... The Cossack, though pierced by fourteen bullets, met them with great zeal, which greatly surprised the Polish army and even its royal majesty, in whose presence ended this fight. The king was very enthusiastic about the courage of this man and ordered to cry out that life gave him when he surrendered; the latter proudly replied that he no longer cares about living, but only wants to die, like a real warrior. He was killed by a spear blow by another German who came to the aid of the attacker. ”