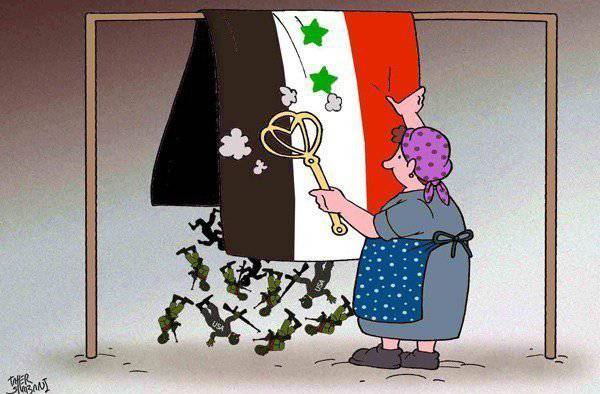 January 31 ends the first stage of the international conference on Syria "Geneva-2". After the break, a second round of talks should take place.
Over the 10 days of the conference, many predictions were made, quite a few statements were made from all sides. The Syrian delegation, guided by the interests of the people, put at the center of the issue the cessation of terrorism. In addition, she proposed to discuss the Geneva communique attentively, every point to try to find points of contact. But the delegation of the "Syrian opposition" was interested in only one point of the document - namely, that which concerns the transitional government.

However, the first point of the Geneva communique, on the basis of which Geneva-2 was convened, concerns the cessation of violence and terror. And the execution of all subsequent points is possible only when there is no terrorism in the country. Without this condition, no serious and effective political decisions are possible.

Regarding the behavior at the conference of the opposite delegation, we can say that they expressed the interests of various parties that stand behind them: Saudi Arabia, Qatar, the USA. One of those who led the "opposition" in Geneva was former US ambassador to the UAR, Robert Ford. He constantly held meetings, both with individual “oppositionists” and with the whole delegation. They did not dare to take a step without his instructions.

At the January meeting of 30, the delegation of the CAP introduced a draft statement regarding the fight against terrorism. This project was entirely based on UN Security Council resolutions No. 1373 of 2001 of the year and No. 1267 of 1999 of the year. In this document, special attention was paid to the need to confront terrorist groups, for which the cooperation of all parties is important. It also called upon all countries of the world to make all possible efforts to stop financing and arming terrorists, creating training bases for them, and their political patronage. The importance of controlling the borders of all countries neighboring Syria was also mentioned in order to stop the infiltration of terrorists and smuggling weapons.

The delegation of the "opposition", apparently guided by the instructions of Robert Ford and other sponsors, rejected this project.

Thus, people from the "opposition" took off the mask of "benefactors of the Syrian people" and proved that they directly support terrorism, do not want peace in the country and do not even respect the resolutions of the UN Security Council.

"Oppositionists" staged another provocative performance for journalists present in Geneva. They brought with them a woman who called herself the mother of one of the foreign militants, a British citizen of Indian origin, Abbas Khan Shah. Under the mask of a doctor, this person illegally entered Syria, was with the militants, provided them with medical assistance. However, even if one assumes that his activity was limited to treating militants, it is still a complicity in terrorist crimes.

He was arrested by the Syrian authorities. After consultations between the British and Syrian secret services, Syria decided to pardon him and return to Britain. But he hanged himself in prison. All documents on the matter were transferred to the British side, including a medical report on the cause of death, which also states that no traces of violence were found on his body. Obviously, this person was well aware of his guilt, otherwise he would have no reason to commit suicide. So there is every reason to assume that he was far from just a doctor.
In Geneva, a woman who described himself as his mother, in front of television cameras of journalists, was hysterical, cursing with the last words about Syria. When the Syrian journalist Haifa Said tried to ask her a question about the details of the case, the furious fury got into a fight and almost beat the girl. They were separated.

Even if this woman is really the mother of an action movie, then she should blame herself for what happened. After all, her son went to a foreign country, entered there illegally, acted in the ranks of armed groups that kill the Syrians. And what could she say to the mothers of Syrian soldiers who were brutally murdered by terrorists? Parents, children, brothers of those who died in the terrorist attacks arranged by these very "friends" of her son? And those who are the fault of the crimes of the militants have become disabled?

In the meantime, the conference is going on, the villains of the “opposition” continue almost every day. Only 30 January in Damascus, was bombarded by terrorists in the Midan quarter, four people were injured. In the city of Deir-ez-Zor, gangsters fired mortar shells into houses in the Gazi Ayyash quarter. Killed 4 man, including woman and child. In the city of Homs, mortar shells fired by militants in the Al-Hamra and Al-Midan neighborhoods wounded six people. In the city of Aleppo, in the quarter of Al-Khaldi, two were injured as a result of the same crime. In the province of Daraa in the city of Al-Harra, a shell launched by the criminal "opposition" hit the telephone exchange. Her director and one of the employees were injured.

But neither the death nor the wounds of the Syrians do not offend the patrons of the bandits, above all the United States. “Geneva-2” had not finished yet, and they are already striving to prepare a new pretext for a possible intervention.

On the part of the States in recent days, two anti-Syrian statements were made at once. US Secretary of Defense Chuck Heigl expressed dissatisfaction with the way the operation is underway to destroy the Syrian chemical weapons. "The United States is concerned that the Syrian government is behind the agreed timetable for the withdrawal of chemical weapons," he said.

The truth is that the Syrian side is absolutely not to blame for lagging behind the schedule. The Syrian leadership has done everything that was provided for by an agreement between the SAR, the UN and the Organization for the Prohibition of Chemical Weapons (OPCW) - provided information, provided access to experts. Further steps are already being carried out by a special joint mission of the UN and the OPCW. Experts of this mission at the end of last year said that the delay in schedule was due to adverse weather conditions, as well as the actions of terrorists that pose a threat to experts. Washington, as always, is trying to blame the wrong side. Apparently, in bad weather, according to American logic, the leaders of Syria and personally Bashar Al-Assad are also to blame.

Almost at the same time as Hagle's statement, the words of American intelligence officer James Klapper, who accused Syria ... of making biological weapons, were heard. Speaking to the intelligence committee of the US Senate, he said: "According to our estimates, some elements of the military biological program could go quite far." However, he did not provide the slightest evidence of such allegations. Even forgot to shake a test tube, as once Colin Powell.

Thus, the United States deliberately makes efforts to completely fail the Geneva-2 conference, in order to justify again its intervention in the affairs of a sovereign state.

Ctrl Enter
Noticed oshЫbku Highlight text and press. Ctrl + Enter
We are
Geneva-2: the miracle did not happenIran and Geneva-2
Military Reviewin Yandex News
Military Reviewin Google News
115 comments
Information
Dear reader, to leave comments on the publication, you must sign in.