How will Ukraine’s heart calm down? Consider options 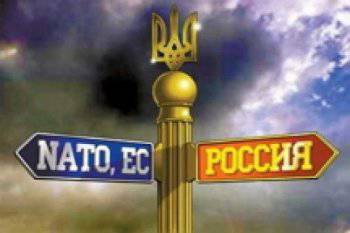 And what really happens? Why is the current government losing ground so actively that the opposition barely has time to put forward more and more new demands? There are several plausible hypotheses, each of which, unfortunately, leads to similar and equally negative forecasts and scenarios.


Background. Ukraine has literally been breaking into Europe lately, signing one agreement after another. Europe, in turn, made cautious steps towards it, forgiving even the blatant disobedience of the Ukrainian authorities in relation to the insistent demands of Europe to release “political prisoner No. XXUMX” - Yulia Tymoshenko. The future was bright and cloudless, it seemed that only a few hours remained before association with Europe, followed by fraternization and unity of nations, when suddenly ... In the adjusted process, something broke and the association covered itself with a copper basin.

There is no need to go far for explaining the reasons for such a sharp change in the course of the Ukrainian authorities - they are easily detected within some 800 km from Kiev, in a village called Moscow. This is closer than to Lugansk and Simferopol, albeit further than to Lviv and Ivano-Frankivsk. That is, in general, hand at hand. It turned out that Moscow does not share the joy about the upcoming reunification of Ukraine with the “European dormancy”, but they see Ukraine as part of the Eurasian community, the notorious “Big Space”, which Russia as a state-civilization does not mind building around itself. There are not so hypothetical reasons for Russia's interest in the affairs of the former fraternal republic — these are the military and economic interests of both the Russian government as a whole and the individual oligarchic groups that contain this power. In other words, if Russia is more or less satisfied with Ukraine being neutral, then Ukraine, as a springboard for NATO and an open market for EU goods, is categorically unacceptable.

But why does Russia remember Ukraine only at the very last moment, as a not very diligent student about the session? Yes, everything is quite simple: Ukraine without 5 minutes is bankrupt, and not in the least it is connected with economic blockades and not too fraternal economic policies in the field of natural gas supplies, which Russia has been pursuing lately, such kind of soft buttings and clasps from older brother to a naughty and slightly unlucky little sister. And for various reasons, my sister decided that she and Russia are not on the path, since the big rich uncles from Europe and even from across the Atlantic give her signs of attention. Simply put, our Ukrainian oligarchic groups are more interested in doing business with civilized Europe than with wild and corrupt Russian business.

Russia, in turn, puts pressure on the power of Ukraine, pursuing a policy of political stick and economic carrot.

Europe, disappointed in the current Ukrainian government, is looking for ways to discredit it and to eradicate it as soon as possible.

And, finally, the main world gendarme in the person of the United States conducts another “subtle political game” according to reliable scenarios of color revolutions. And the goal of the game is not Ukraine, as in the previous game, but Russia itself. Because today in Ukraine, unfortunately, there is no candidate for the presidency, who would also be the husband of an American intelligence officer. Therefore, the United States can act and acts as tough as possible, without flirting. The Egyptian-Eirian-Libyan scenario is being played out, the purpose of which is not constructive changes, but the maximum destructive - the worse, the better. And let Ukraine say thank you that the Republicans are not in power in the USA today - otherwise the events on Independence Square in Kiev would take place on an even larger scale.

But back to the options for the development of the situation, given the current political alignment.

Option 1: The government nevertheless introduces a state of emergency and resorts to force-based methods, since the “field commanders” of the Maidan are completely uninterested in any compromises and speak only the language of force. Unfortunately, with this option, the situation is almost inevitably catastrophic; One or two weeks of such confrontation will lead not only to victims from among the police and civilians, but also serve as a pretext for entering NATO’s “Myrtovorts”. Alas, the authorities do not have enough strength to do away with the militants quickly and efficiently, which means that an escalation of the conflict is possible up to a large-scale civil war in Kiev and the regions.

It should not be forgotten that resources in the hands of the authorities are limited, whereas its opponents have an almost inexhaustible source: if the “hawks” in the US got down to business, then they will bring it to the end, regardless of financial, material and human costs. . In addition, our near-business business is not at all interested in freezing accounts, the inevitable loss of assets and full-scale combat operations - indeed, a bad world is better than a good war.

True, one should not disregard Russia's political and other influence on Europe, primarily through gas supplies. Europe should not hope that the gas transmission system of Ukraine in the context of the civil war will remain workable. Accordingly, Russia will overlap the taps, and at least part of Europe will remain without energy, and this is in winter. Therefore, the option is not excluded that Europe will not interfere in any actions of the authorities to restore order, up to a forceful decision to clean up the Kiev and regional Maidan. Europe, but not America.

So, for a quick (read - forceful) resolution of the conflict: the power of Ukraine, most of the people of Ukraine, Russia.

Against: domestic business, “hawks” of the USA.

Option 2: peaceful settlement of the conflict, read - its delay to new elections. The Maidan stands in a camp in the middle of Kiev until spring, and if necessary, until summer. The power is completely compromised, the results of quasi-democratic elections are not difficult to predict. Fascists and nationalists, generously funded from overseas, receive unprecedented 25..30% of votes and become a convenient political tool for the United States to inflame tensions in the region. Europe gets open sales markets, NATO - the Crimea and the territories bordering with Russia to house military bases. Ukrainian business is a bit feverish, there is another redistribution of spheres of influence, but oh well, especially since, ultimately, most of the assets are divided between global international corporations. Russia raises gas prices for Ukraine to slightly higher than average European, the industry is bent. Ukraine is entering into a protracted and mega-deep economic crisis without any hope of a “better situation”.

Option 3: "null". Miraculously, it is possible to find a compromise between the authorities, the opposition and the field commanders of the Maidan. This option is possible only if a) Russia finds “convincing arguments” for Europe (which is relatively simple) and the USA (mm ... yes) that neutral Ukraine is better than its dismembered corpse; b) the militants leave with “peremoga” in the form of early elections to the Rada, which will be the “axis-axis” and other gifts, and c) the government negotiates with the oligarchs, say, that part of the state assets will be denationalized and will receive new owners, moreover, not necessarily from the PR.

Well, something like this. Let us return to the hypotheses regarding the actions of the authorities. The authorities either: a) are completely demoralized and pack their suitcases for moving to relocate somewhere on islands in a warm ocean, or b) are entirely oriented towards the 3 “zero” option and simply take time, or while the warlords will make some concessions and will free administrative buildings. In this case, at least theoretically, it is possible to conduct a quick and effective sweep of the territories, while not obtaining the status of an international criminal and the corresponding sentence of the Hague court “with confiscation of property”. Again, such a scenario is possible only with the strong support of Russia, if only to neutralize Europe with its propaganda machine, the Hague court and financial sanctions.

The current government, as we know, is far from uniform. She, like an old cart, is pulled in different directions by “swan, cancer and pike”, i.e. Akhmetov, Kolesnikov, Firtash and other characters. But it is unlikely that the aforementioned persons are packing their bags now, because in the current government everything is as though they were the fighters who defeated the competitors in the dashing 90 and received their considerable fortunes not at all from the wealthy relatives. These people are able to fight and will fight to the victory. But they fight in different ways.

It is not difficult to imagine how some oligarchs are now gathering around the world, from London to Moscow and Washington, graduated analysts, advisers and political analyst consultants. As they, in turn, prepare cautious and at the same time very disappointing forecasts and scenarios for the development of the situation. How the oligarchs carry these predictions for acquaintance with the “dad”, without skimping on the recommendations: no abrupt actions, in the force variant too much risk, we will conduct secret negotiations with agents of influence in London, Berlin and Moscow, etc. etc.

It remains to hope that all these actions, in combination or separately, will lead to at least some result. After all, if you look closely at the Maidan in the center of Kiev, then we will see only miserable and poor characters of the puppet theater. It is necessary only to tear the threads, and the dolls in rag heaps will fall to the ground. There, on the Maidan, there are no truly living people, there is only a zombie crowd, skillfully controlled by manipulators and their puppets.