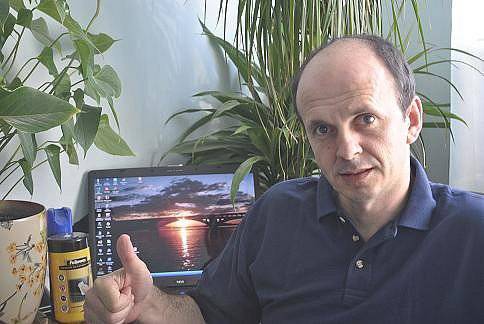 To date, the buildings of regional state administrations of all regions of Western Ukraine have been seized (except for the Volyn region, where the siege of the building continues). The only region in western Ukraine in which legitimate authority continues to operate, and the population has actively opposed the neo-Nazi revolution exported from the Galician regions - Transcarpathian region, historical Subcarpathian Russia. We asked to answer the questions about the situation in Transcarpathia and in Ukraine, as a whole, of the famous figure of the Rusynsky movement Pyotr Getsko. We make a reservation in advance that we can not agree with all the assessments and wishes expressed. However, we consider it appropriate to provide an information platform for a representative of a region with a strategic position.


Peter Ivanovich, I will begin the interview with you with the most burning topic. How does the Ruthenian movement of the region oppose illegal actions to seize power in Ukraine?

- For six years already, the Ruthenian movement has been actively working on the ideological confrontation between the neo-Nazi Galicia and Transcarpathia, which is oriented towards Russia. Rusyns have successfully mastered the network format. Practically at this level, we outright won against Bandera from Galicia. Hence the extremely negative attitude in Transcarpathia to any raids by Bandera. The trouble was that in Transcarpathia all this time, especially under President Yushchenko, they were under the tight protection of the police and the SBU. But if they are deprived of this support, the Galician question locally in Transcarpathia will be resolved in a short time.

Transcarpathia and the Rusyns are neighbors of Galicia, but they are a stronghold of pro-Russian forces and the integrity of Ukraine.

It historically happened. Of course, in Transcarpathia there is a certain negative attitude towards Russia. But it is so small that it can be neglected. That is, Russophobia is practically minimal. Many say that the difference in attitude towards Russia was predetermined by nature itself - the Carpathian mountain range. Hence, many mental factors: Russophile Rusyns and Russophobia of many of their neighbors behind the pass, that is, Galicians. Plus mutual exchange and mutual enrichment by the elites between Russia and Subcarpathian Rus. Galicia was not like that. Rusyns, of course, the mountain people. We are Orthodox, but we have a strong character. If the majority of the Galician Rusyns managed to be broken and turned into Ukrainians, then the Carpathian Rusyns carried their language and faith through the centuries.

As for the practical actions of literally the last days, I can say the following. In the capital of the region, Uzhgorod, attempts to seize the RSA building mainly by neo-Nazi forces from Galicia failed due to the reasons described above. On January 25, Transcarpathians sent groups of a total of 300 people to control the passes connecting the region with Halychyna in order to prevent the breakthrough of neo-Nazi convoys heading to seize power in the region. Earlier, the column of avtomaydan was thrown with rotten eggs in the Vinogradov district of the region. Transcarpathians are ready for other, much more extreme measures in respect of visiting “revolutionaries” Bandera. But it's better not to talk about it yet.

How do you and your countrymen see the further development of the situation in Kiev and in Ukraine, in general?

- All agreements between the President of Ukraine and representatives of the opposition are not something unshakable. This value is variable, it remains only to wait for when, or from what exactly everything will return to normal. Those. to the crisis, which is still there. In Kiev, the situation is very incomprehensible, but at the same time, if there is political will, it is solvable. Unfortunately, delaying its solution has already caused the problem to grow. But even now, this expansion of the crisis has not yet reached the point of no return. Again, we need political will, and, most importantly, the people will support the authorities and security forces in restoring order. Bardak all zadolbal already. The political will is needed, first of all, for Kiev with a hard sweep of Galician and progalytsky extremist elements, as well as for 3-4, and possibly 5 of Galician and Volyn regions, the introduction of rigid full-fledged borders.

In the meantime, real solutions to the crisis except self-extinction Maidan is not visible. V. Yanukovych most likely will not give a command to disperse the Maidan, and even more so the cleansing of Kiev. In this situation, the voltage will be intensified in Kiev, and the brunt will be transferred to the western regions. Where the new Bandera can do is in the three Galician regions, which, by the way, voted in the 17 March 1991 referendum against preserving the USSR. These are Lviv, Ivano-Frankivsk and Ternopil regions. And the city of Kiev! Of course, they will try to seize, and perhaps even capture other regional administrations not only in Western Ukraine. It would be more logical to localize this process rigidly at the level of Kiev, and urgent measures to spread financial influence, that is, budgeting restrictions, would be urgently extended to the three Galician regions. In addition, it is hard to stop any attempts to capture buildings in any region except three Galician. This is both a vision and a wish. This is the first stage. In this case, the process will be localized. If you do not go this way, letting everything go by itself, carrying out only the passive protection of only the government quarter in Kiev, the situation will get out of control.

- In the regions, if the central government in Kiev is paralyzed, it is difficult to predict the actions of extremists and the reaction of the security forces, who are ordered to just stand, without resorting to active measures. If this practice is continued further, then the strength is not enough. But in principle, the same can be said about Bandera from Galicia. It very soon turns out that they simply do not have the physical strength to support all this space, which they have seized in fear, and even more so, to turn into a legitimate power.

In any case, power is stronger, but subject to the political will of the country's leadership.

What are the positions of the Ruthenian movement in the opposition in the region?

- Rusyns are firmly on the side of the official authorities. Now it’s really clear who was the separatist in reality and who should have been tried. (Against the leaders of the Ruthenian movement during the presidency of V. Yushchenko, criminal cases were initiated on charges of separatism; in response, the Rusins ​​put forward the slogan: “We are not separatists! We are at home!” - E.P.). In addition, the Rusyns have reason to refer to the results of the 1991 referenda of the year. From 17 March 1991 of the year All-Union, in which the Rusins ​​voted for the preservation of the USSR, Transcarpathian Regional from 1 December 1991 of the year FOR "Special self-governing territory not included in any other administrative territorial entities". And the third referendum, FOR the independence of Ukraine. So, in the event of the elimination of legitimate authority, and, God forbid, the collapse of Ukraine, the third referendum is devalued, the first two remain. Transcarpathia will act according to those referendums. But, unequivocally, and categorically, the future of the region is not with Galicia, where today Bandera extremists dominate. This is excluded in any scenario.

In the case of separatism of Galicia or the victory of Ukrainian neo-Nazis in all or most of the territory of Ukraine, what steps do you plan to take?

- Actually, the situation is already close to this. The Rusins ​​had always resolved the issue by diplomatic means during the disintegration of the metropolises and under Austro-Hungary (Subcarpathian Russia was part of the Hungarian kingdom of the dual monarchy — EP), and in Czechoslovakia (Subcarpathian Russia was part of Czechoslovakia in the period between the two world wars - E. P.), and under the USSR, the territory of the Rusyns south of the Carpathians always received autonomy with the broadest rights ... Will it be possible to solve everything now at the diplomatic level? This, in the first place, will depend on the successor of the USSR, which, after its collapse, is Russia. In the event of an armed conflict, Hungary's intervention is possible, more precisely, inevitably (a well-structured Magyar minority makes up about 12 percent of the population of the Transcarpathian region, almost all Hungarians of the region have passports of the parent state - E.P.). In addition, there is a precedent for 1939 of the year when Bandera led by Avgustin Voloshin (the prime minister of the so-called Carpathian Ukraine, which existed for one day due to the Hungarian invasion and lack of support from the Ruthenian population - E.P.) and Hungary for one day (!) 15 of March 1939 of the year cleared the region from visiting Galician-Bandera. Unfortunately, there were no casualties among the Ruthenian population, that part of the youth who succumbed to Bandera propaganda. The repetition of the situation is quite possible now: Hungary (we recall, a member of NATO!) May send troops into Transcarpathia to protect the Magyars from the new occupation by new Bandera from Galicia. Considering that the Budapest-Moscow axis is now taking shape, the Bandera zaperalalnye have no chance in Transcarpathia. But if the Magyars of Transcarpathia rightly look in the direction of the parent state, then the Orthodox Rusyns expect to receive help from Russia and the Russian people. We have kept the common Russian name and faith, in the Ruthenian churches, services are held in Church Slavonic, and the Rusins ​​themselves are a very religious and God-fearing Orthodox people.

Developing your idea: what is the role of possible Russia in pacifying the Ukrainian crisis?

- Russia, in the event of complete paralysis of the authorities in Kiev and the threat of invasion of Bandera militants from the pass, could have implemented a peacekeeping operation, including before the start of the Olympics. The Rusyns have no intercession except Russia. The second block is associated with diplomatic influence: for example, at the upcoming Munich Security Conference, Russia can, and we believe, should state a clear position on supporting the Russian and Russian-speaking population of Ukraine and Transcarpathia. including from acts of genocide.

As I see it, these are two main directions. If Russia succeeded in settling the conflict in Syria, then Ukraine can also regulate it. Now Russian President Vladimir Vladimirovich Putin has such weight and prestige in the Slavic world and in the international arena as a whole, that he can afford the implementation of such diplomatic measures. Justice in this world, as the Syrian events have shown, lives in Russia alone.

Peter Ivanovich, thank you for your interview and wish you and the brotherly Ruthenian people of the world!