January 31 2014
90
The ongoing discussions on the situation in Ukraine every time are “choked” on the question: why the political West and its “democratic” media “do not see” the Bandera fascists of “Freedom” in Ukraine and stubbornly hide them behind all sorts of “radical” euphemisms, and now they are repeating the lie about something "Right Sector"? 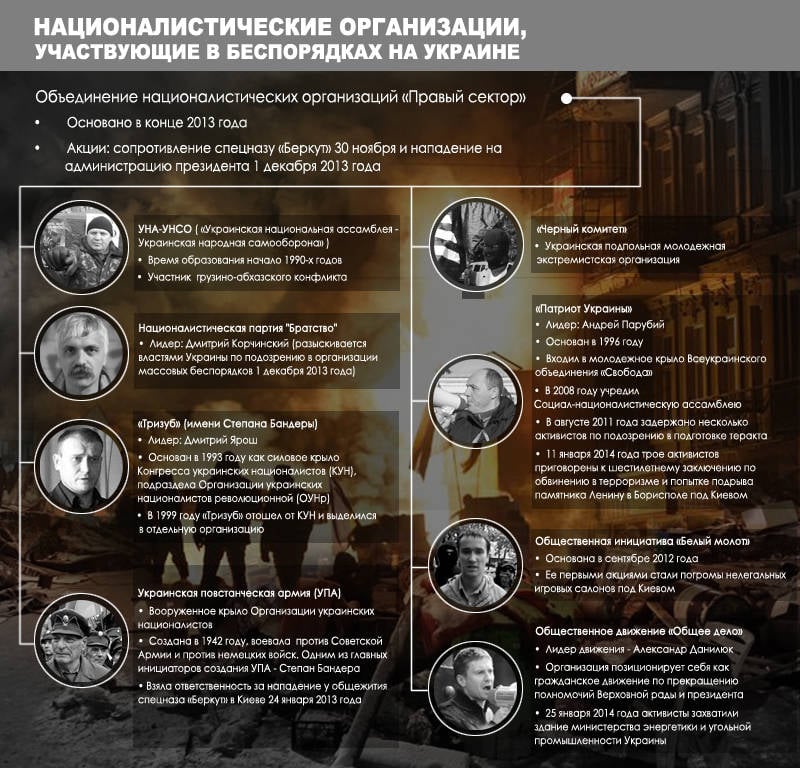 And even our media, apparently from some higher considerations, are led by this “radical” nonsense. Given that the neo-Nazi Golden Dawn was banned in Greece, its leaders were imprisoned. The neo-fascist Austrian Freedom Party was defeated, and its leader was killed in an accidental car accident. But in Ukraine everything is exactly the opposite ...

For many reasons, the last program of Vladimir Solovyov (channel “Russia) was told about them again. These are geopolitical reasons (to tear Ukraine away from Russian civilization); economic (business of the West is just profitable, nothing personal); finally, historically, the West has opposed Russia, and therefore, already somewhere, it instinctively supports any anti-Russian forces.

Therefore, Bandera fascism in Ukraine has long been legalized and represented in parliament by the Freedom Freedom Party, and today, “radical protesters” are hiding behind the signboard and supported by local pro-Western oligarchs and the Western “democratic community”. And the Western media is his "peaceful." But this is precisely fascism, so it’s time for Yanukovych and his business friends to think not about money, but about saving their lives. “Save our souls” - these are the signals that we can very soon hear from Ukraine.

Another important reason: Bandera for the West is “their own” fascists, euro-fascists, they nurtured them with grants and helped instructors, they have long made them a ram against Eastern Ukraine and Russia. Therefore, by the way, today they are so well organized, covered politically, informationally.

The notorious drive of Galicia has nothing to do with it. Their opponents, of which there are many in Western Ukraine, are still fragmented and disoriented. By the way, the fate of anti-fascist-minded people in Western Ukraine is already under great threat, because Bandera has already seized administrative power there.

But there is one more, and fundamental, reason why the West supported German fascism, and today supports Bandera. The essence of the ideology of the West in relation to the outside world (and its internal, white and fluffy side in this case is not interesting for us) is the ideology of superiority, “exclusivity”, in the language of official American propaganda, today because of the “Western democracy” ". This is the ideology of “good with the colt, which is better than just good”, speaking in Hollywood images, or the ideology of James Bond “with the right to kill” for higher and humane Western purposes, in the words of English cinema and adventure literature. In other words, it is part of the Western mentality.

In politics, this is behind the metaphor "double standards", in principle, this formulation contains everything, including fascism. The essence of fascism is also the ideology of superiority, only in an extreme, racist form. This is the racially exclusive ideology of exclusivity. Another difference is that the ideology of “good with the colt” and James Bond “with the right to kill” implies doing everything in “white gloves” and killing. Western fascism here went further, called it a netting, and a lie, not hesitating to wear, in exceptional cases, “black gloves”.

Therefore, Viktor Yanukovych should be aware today that he is trying to negotiate with people who openly admit the possibility of using black gloves, but are supported by Western humanists who insist that everything needs to be done, or at least try to do, in “white gloves ". They, of course, agree, these people are in "black" and "white" gloves, they are already touchingly meeting, are treated to cookies ... That is, cleaning Yanukovych and his "regime" will be as humane as possible, and if it is impossible to do without "black gloves" then for a very short time.

There are plenty of examples of such a reincarnation of the western “white and fluffy” into “black and disgusting” stories, from Yugoslavia to Libya and Syria, and here they got to Ukraine. Therefore, it is clear that Yanukovych and his friends, and the whole of Ukraine, have no chance of getting out of the “euromaidan crisis”. Self escape. Therefore, the West demands from Russia not to interfere in the matter of the civilized “strangulation” of Yanukovich, but, most importantly, of Eastern Ukraine. That's what they count on? If Russia is not allowed to do this with Syria, will it really allow it to be done with Ukraine?

The West is becoming stupid not according to Mikhail Zadornov, but according to Robert Gates, the former US Secretary of Defense. He served under eight presidents of the United States, admired by both Democrats and Republicans. And in the recently published book of his memoirs, The Debt, Gates expressed what was boiling long ago: congressmen were “hypocritical” and “stupid,” deputies of the House of Representatives were “rude, disgusting, and stupid.”

Moreover, Joe Biden, architect of the Ukrainian politics of the USA, who recently recommended Yanukovych to create a “pro-European government”, was particularly affected. “I think he was wrong on almost all issues of foreign policy and national security during the past four decades,” Gates writes in his memoirs. “I think Biden subjected Obama to Chinese water torture every day, saying,“ You can't trust the military. ”

What to do with such a stupid American establishment? With his democratic show? Such as Gates, the American system rejects. Hence the failures of the West with Snowden and Syria. Putin is only pursuing a sound policy, while common sense leaves America, and this is the most dangerous thing happening in the world today.