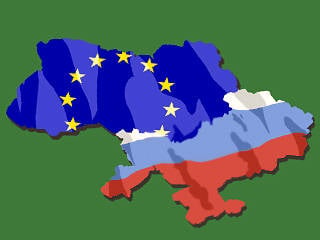 For a start - a little stories.

In 1945, the Yalta Conference raised the issue of the borders of the Polish state. The great powers, the USSR, the USA and Great Britain, decided to compensate the territorial losses of Poland in the east, at the expense of the lands of Nazi Germany in the west, to hand over to it also the free Hanseatic city of Danzig and part of Prussia.

With the collapse of the current Square with a high degree of probability, the Crimea, the East and the South will retreat under the protectorate of the Russian Federation. And Galicia sooner or later will become part of Poland as its historical part. This fact will enable the FRG to demand a revision of its eastern borders, since the Helsinki agreement on the inviolability of borders in Europe has long been trampled upon by all. Germany will never give up their ancestral lands. This is evidenced by at least the fact of the presence in it of mass so-called revanchist organizations demanding the return of these lands, Silesia, for example.

The question is: can the FRG force Poland, in the scenario of the collapse of Ukraine described above, to give up their historic lands? Answer: a rhetorical question. Of course, he can, especially if this topic starts to strenuously pedal everywhere and everywhere.

Another question: who can protect Poland from the claims of Germany? The answer is obvious: seemingly the United States. But here is not so simple. Is it because of the claims of Poland to Eastern European hegemony to question the integrity of NATO? From here, by the way, the roots of the so-called Eastern Partnership program are growing. Take the wrong step and push Germany to the Russian Federation? Or do as in the case of Cyprus? But then, I don’t even want to dream, NATO is in any case the end, and the FRG is a new center of power and simply an accomplished hegemon in Europe. All "send" the United States and sworn to the new owner. At the same time, the RF position in Kaliningrad / Königsberg is quite strong. Our land has not increased. Kaliningrad has departed to us by the right of the strong - for an undeclared, not provoked war, unlike Poland. And we are a nuclear power.

But who can support the Federal Republic of Germany in Eastern Europe is Hungary. In 1940, Romania has cut off a big chunk of territory. Well, respectively, the Russian Federation, in exchange for the Russian-German symbiosis. The Germans do not forget that we are a nuclear power, and they won, but also the fact that in fact we allowed them to unite.

Having fantasized in this vein, one can understand why the Russian president is calm, why Poland is suddenly silent, why the US is threatening sanctions not only for the authorities of Ukraine, but also for the opposition, why Yanukovych has not subscribed to this damn association. Why, finally, under any Ukrainian government, Ukraine will not be allowed to fall apart. Until…

And then you wonder what it means to have Uncle Joe ...

Ctrl Enter
Noticed oshЫbku Highlight text and press. Ctrl + Enter
We are
"Occupation" with a gainIgor Shishkin: Algorithm for the reunification of the Russian nation: reunification as a response to the challenge of disintegration
Military Reviewin Yandex News
Military Reviewin Google News
270 comments
Information
Dear reader, to leave comments on the publication, you must sign in.