January 31 2014
16
China is actively developing its armed forces and makes other countries nervous. Not long ago, the head of the US Pacific Command, Admiral S. Locklear, acknowledged that the era of American military forces in the Pacific was coming to an end. Last news and expert statements suggest that the Chinese military are strengthening their presence not only at sea and in the air, but also in space. 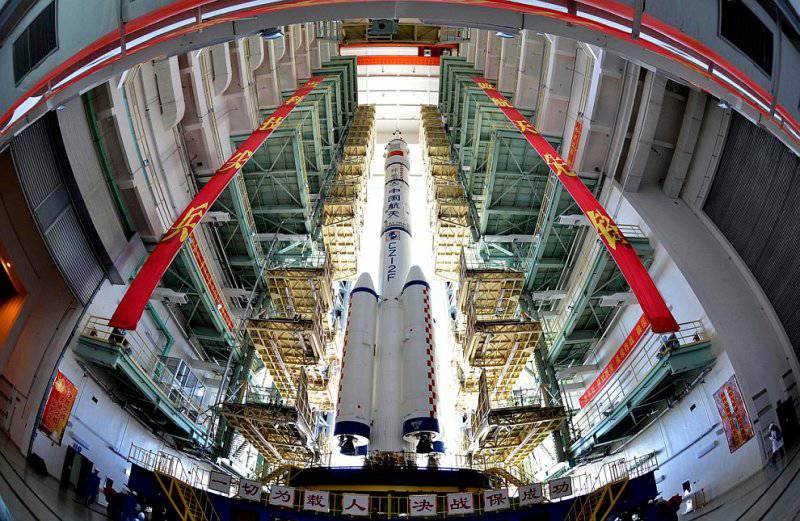 On Tuesday, January 28, several experts spoke to the US Congress, whose reports were devoted to threats of the near future. The main concerns of American experts are related to the development of the Chinese armed forces. According to a former State Department official and the National Security Council, EJ Tellis, there is a threat of an outbreak of armed conflict in the Asia-Pacific region. China’s recent actions only increase the likelihood of such events. An additional threat to regional security are new Chinese projects of advanced space weapons. Tellis compared the danger of such developments with “offensive cyber operations”.

The former head of the US Air Force Space Command R. Butterworth spoke about some famous Chinese developments. American intelligence has information about the existence of a number of space projects. weapons. According to Butterworth, scientists and designers in China are currently developing anti-satellite weapons (including to hit targets in high orbits), electronic warfare systems, "cyber weapons", laser weapons, etc. In addition, not so long ago it became known about the launch of several small interceptor satellites. According to Butterworth, these satellites can be used to destroy various spacecraft. At the same time they have small dimensions, which complicates tracking them.

According to the experts who spoke at the Congress, China takes into account the possibility of the beginning of an armed conflict with the United States and is preparing for it. Apparently, at present, the Chinese military are carefully studying the American grouping of spacecraft and determine the priority of certain satellites. In the event of a war, they can attack the most important devices, intending to cause maximum damage to the US armed forces, which in this case will not be able to fully use satellite communications and navigation systems.

Experts recognize that the war between the United States and China is not an inevitable scenario. There may be no armed conflict, but this is not a reason to relax and not take into account possible risks. To minimize threats, it is necessary to conduct your own projects of various weapons systems, communications and control. In addition, the problem can be diplomacy. One of the ways to reduce risks can be the US-China agreement on cooperation in military space technology. However, E. J. Tellis immediately expressed doubt about the possibility of signing such an agreement. The presence of anti-satellite weapons is a convenient asymmetric tool for China, suitable both for political pressure on opponents and for real combat operations.

The presence of China’s projects of promising space weapons systems became known several years ago. So, in January, 2007, the Chinese military destroyed the weather satellite, which developed its resource. The loss of the spacecraft occurred at an altitude of more than 860 kilometers. These tests clearly showed a certain potential of Chinese developments. In 2010, the same tests were carried out, but the real target was not used in them, and the interceptor rocket had to go to a given orbit point. Since then, Chinese scientists have been able to advance in their work and create new anti-satellite systems with higher characteristics.

20 July 2013 of the year China put three new spacecraft into orbit, the exact purpose of which still remains a mystery. Soon, in the American press, the first information appeared about the launched spacecraft, allegedly obtained from intelligence sources. Thus, according to The Washington Free Beacon, one of the three Chinese satellites was equipped with a retractable manipulator, supposedly designed to capture or damage other spacecraft. In some ways, confirmation of the assumptions about the purpose of the manipulator was the information that appeared in mid-August. One of the satellites moved to a new orbit, 150 km below the original, and then passed a few dozen meters from the other. Probably, in this way, Chinese experts studied the possibility of approaching satellites with an attack by an enemy apparatus.

According to some reports, China is currently developing a new interceptor missile capable of destroying spacecraft at altitudes up to 20 thousand kilometers. This project, most likely, is still far from practical application, but the fact of the work requires the adoption of appropriate measures. In the event that anti-satellite systems with such high characteristics are put into service, the Chinese military will receive a more than serious “argument” in a hypothetical military conflict. With the help of such missiles, they will be able to destroy a significant number of US military satellites for various purposes. This means that US troops will be forced to use spare means of communication and navigation, which will accordingly affect the effectiveness of their combat work.

Thus, now the United States should pay attention to a new aspect of the coming confrontation in the Asia-Pacific region. Information currently available on prospective Chinese weapons can be considered a sufficient cause for concern. Given the zeal of China in building its own armed forces, it is possible to make assumptions about the timing of the implementation of new programs. It is quite possible that by the end of this decade, the Chinese military will receive a new weapon to destroy spacecraft.

Ctrl Enter
Noticed oshЫbku Highlight text and press. Ctrl + Enter
We are
The Washington Post: the battle for "the most valuable real estate in space"Weapons are prohibited. Part of 6: Nuclear weapons in space
Military Reviewin Yandex News
Military Reviewin Google News
16 comments
Information
Dear reader, to leave comments on the publication, you must sign in.