CELAC and the “death sentence” to the United States 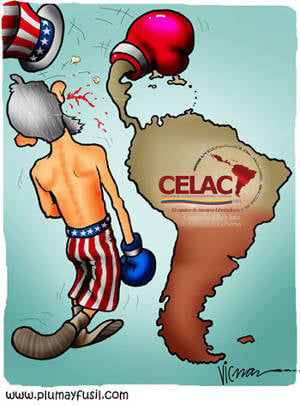 The Community of Latin American and Caribbean States (CELAC) was created in December 2011 in Caracas at a summit of heads of state and government of the region. In those days, Comrade Chavez declared that by creating a new union, the countries of the region were realizing the dream of Simon Bolivar. According to Comandante, the Community is “the foundation stone for the freedom of Latin America and the Caribbean.” The words of Nicaraguan President Daniel Ortega are also known. He stated that the existence of CELAC is "a death sentence for American intervention in Latin American affairs." CELAC united thirty three countries of the region. Of course, the United States and Canada are not among them.


28-29 On January 2014, the CELAC Summit was held in Havana. Cuban leader Raul Castro called on the Community to cooperate in the fight against new threats. Among the latter, he said, is the US global network espionage - up to the invasion of information networks of other countries.

“The only way to prevent and counter these new threats is joint cooperation between the states, as well as to prevent the transformation of cyberspace into a theater of military operations,” comrade Castro said.

Leaders of states participating in CELAC have declared America to be a zone of peace. And the “world” is not empty declarations. It was determined that the contradictions between the member countries of the Community will be resolved through negotiations. There will be no use of force in the region.

Thirty-three states have called on the United States to lift the economic blockade of Cuba.

A separate topic at the summit was cooperation with China growing by leaps and bounds. Today it is difficult to name the state among XELUM participants of CELAC, where the Celestial Empire would not have achieved success in economic expansion. It should be noted that the leaders of the American countries agree that the “empire” of the USA is faltering, while China, on the contrary, is growing stronger. Moreover, we note that China is “leftist”, socialist.

Neil Nikandrov ("Fund of Strategic Culture") notes that the Obama administration has organized a counter-summit in Miami to divert the attention of the public.

The initiators of this event are the International Republican Institute (IRI) and the Center for Political Activization and Development of Latin America (CADAL). Both organizations are created by the CIA to conduct subversive operations

According to Comrade Nikandrov, "dirty work" for the United States is being done by persons who have long lighted up as terrorists and paid agents of the special services. For example, the “publicist” Carlos Alberto Montaner, who began his career as a “bomber” in the early years of the Cuban revolution. This figure killed a lot of people in cinemas and shopping centers in Havana.

But Ramon Saul Sanchez - a former member of the terrorist group «Omega 7». It was he who organized the explosion at the Cuban consulate in Montreal and threw explosives into the car of the ambassador of Cuba to the UN.

Another proponent of democracy is Julio Rodriguez Salas. This is a former Venezuelan military, a US military intelligence agent and a conspiracy to overthrow Chávez in April 2002.

The observer notes that the strategy of “promoting democracy on the continent” was discussed at the forum in Miami. Representatives of a number of Latin American NGOs accountable to the CIA took the floor. The key thesis is “the right to revolt”. If there is a tyrannical government in the country, say the speakers, then the people have the right to overthrow it. The thesis, of course, did not apply to the United States, where the people’s rights only appear at the performance of the elections, but to Cuba, Venezuela, Bolivia and other “regimes”.

However, tseerushnikov and their hangers-on did not work. According to N. Nikandrov, Washington was unable to “mobilize” dissident groups for loud “protest” actions, which managed to put together a CIA station in Cuba, working under the roof of the US Interests Mission.

The observer quotes the Minister of Foreign Affairs of Cuba, Bruno Rodriguez, who said that his country's “return” to Latin America was fully completed. Isolation is now a policy not Cuba, and the United States. “If the US wants to establish normal, more productive, trusting and democratic relations with Latin America and the Caribbean,” said Rodriguez, “they must change their policies in the region.” To do this, the United States must "maintain normal relations with them, based on respect for their sovereignty on the foundation of equality." Latin America should be perceived by Washington as an “equal partner, and not as a“ backyard ”.

We can add the following conclusions from these remarkable statements and events.

First, if the United States does not intend to continue to maintain with Latin American countries “normal relations based on respect for their sovereignty on the foundation of equality”, the CELAC member countries will reorient themselves to China as much as possible. Undoubtedly, trade with Beijing will be conducted including in opposition to Washington - that is, with a political background. Thus, by its "gendarme" foreign policy, the White House can not only harm its own economy, but also serve to strengthen the strategic adversary - Celestial.

Secondly, Washington showed obvious weakness. For several years now, the so-called democratic aspirations of the White House on the planet, including propaganda ones, have been causing not only aversion, but also opposition. US influence in the world is falling. This was facilitated not only by the global economic crisis, but also by the policy of instability, chaos, which is carried out in different parts of the world by the builders of "democracy" under the guise of the CIA and other special services. Afghanistan, Iraq, Libya, Syria, and all those countries where the “Arab spring” flared up - all this is the work of American democratizers. We all remember how the “democratic” election of Mursi’s “Muslim Brother” in Egypt was greeted in Washington, and we know how this ended. We all remember the “wow” of Hillary Clinton when Gaddafi was killed in Libya. We also remember about the "Tomahawks", recently aimed at Syria: Russia has saved the long-suffering Syrian people from them. With such an aggressive policy, the US administration in the latter case (military support in Syria) did not receive approval even in Britain and France, that is, from its ordinary allies. Obama seemed to have come to his senses - and even Iran did not want to bomb, which Israel did not like, but this is completely different история.

Thirdly, a flight from the territory of the United States with the secret files of Edward Snowden, who became a public informer and told the world about how Washington "is fighting terrorism", was a powerful blow to the authority of the United States in the world. Talking about cybersecurity at the CELAC summit is a consequence of the revelations of Snowden, whom the US Attorney General has been dreaming of setting aside for thirty years.

Fourth, it turned out what kind of Democrats Washington supports in Syria: from 60 to 80% of them are bearded and lousy brothers in terrorism and direct participants in Al-Qaida or its many, including self-appointed branches and branches. - even such super-frozen ones, against which al Qaeda itself is fighting. Against all this rabble, against these dirty and wild medieval bandits, flocking to Syria across borders and funded by Saudi Arabia, Qatar, Turkey and the United States, the army of Bashar al-Assad is fighting. It got to the point that the intelligence services of Western Europe asked Assad to destroy those mercenaries and Islamist radicals, that after the war in Syria they are going to return to their native Paris, Berlin and London, which they pass by passports to citizens.

Fifth, neither Obama, nor Congress "turned off" the government last year, nor the rapid growth of public debt, nor any talk about American "exclusivity" (which not only Obama spoke of, but Secretary of State John Kerry) did not add to authority. This very "exclusivity" only alerted the whole world. It was not for nothing that Comrade Castro said at the CELAC summit: “Regardless of our progress, we continue to live in a world ruled by injustice and an exclusive international order, in which there is a threat to peace and foreign interference. We can not forget the long history of intervention and bloody coups. The so-called power centers cannot accept the fact that they have lost control over a rich region. ”

Sixth, a book by Robert Gates, a former US Secretary of Defense, was published the other day, where he mercilessly criticizes Congress for incompetence and propaganda, and senators calls "stupid" and "hypocritical" egoists. Members of the Foreign Affairs Committee of the House of Representatives, in his opinion, are nasty and stupid rude. And the White House officials are no better. Vice-President Joe Biden ex-minister considers the "talker", which only makes that makes political mistakes. Obama is accused by Gates of political prudence: after all, in the 2007 year, the future president expressed a negative attitude towards military escalation in Iraq.

Seventh, figures from the State Department were noted with cookies in Kiev, where the introduction of “democratic standards” into the masses is in full swing. Later, speaking with an annual message to Congress, the US President agreed to the point that he said: unrest and rallies in Ukrainian cities talk about the development of democratic freedoms. Obama compared Ukraine with Myanmar and Tunisia: there the United States supports the construction of democracy. By the way, Tunisia has really achieved a lot in a democratic way - even constitutionally equalized a man and a woman last week. Apparently, Kiev is already halfway there ... For the fact that the US administration is sticking to Ukrainian affairs, Obama is even condemned in Washington. For example, James Cardin, a man who worked as an adviser to the presidential commission on bilateral Russian-American relations with the State Department in 2011-2012, is extremely dissatisfied with the White House’s policy toward Ukraine.

Observed and commented on Oleg Chuvakin
- especially for topwar.ru
Ctrl Enter
Noticed oshЫbku Highlight text and press. Ctrl + Enter
We are
Army "Isthmus". Nicaragua: from the American satellite to Russia's allyResults of the week. “Excuse me, aren't you crazy?” - “No. I have a certificate "
Military Reviewin Yandex News
Military Reviewin Google News
19 comments
Information
Dear reader, to leave comments on the publication, you must sign in.