Geneva-2: the miracle did not happen 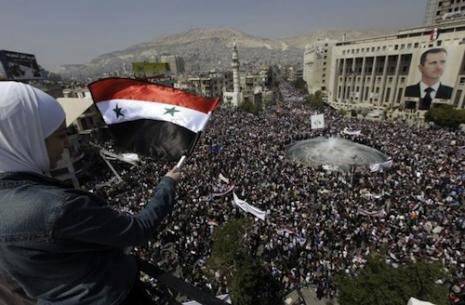 “There is no need to expect miracles from the Geneva talks,” UN Special Envoy for Syria Lakhdar Brahimi told reporters at a press conference held as part of the international conference Geneva-2.

Who is to blame for the event, about which all parties spoke so much, until it brought any tangible results? As for the official delegation of the SAR, then, if we analyze its actions and proposals, one can see: this delegation is doing everything possible so that the negotiations take place. She did not react to any provocations from the delegation of the so-called "opposition", or to direct insults from politicians and some journalists who took an openly biased anti-Syrian position. In addition, the delegation of the ATS has put forward a number of constructive proposals, quite sober and serious.

One of these proposals was the declaration of basic principles for resolving the crisis. These are the basic principles:
1. The need to respect the sovereignty of Syria
2. Impossibility of rejection of any part of the territory
3. Termination of terrorist support weapons and money
4. Rejection of any form of extremism and terrorism.
5. Non-interference in Syrian affairs from abroad
6. The choice of the political future of the country by the Syrians themselves based on the principles of democracy.

The declaration stresses that “Syria is an independent state based on the rule of law, independence of justice, preservation of national unity and cultural diversity.”

The Syrian delegation stated that it is ready to discuss all points of this document and listen to any proposals. These principles, understandable to every Syrian who thinks about his homeland, should become a kind of common platform on the basis of which further negotiations can be conducted.
However, the “opposition” delegation indiscriminately rejected the document as a whole. The reason for such a decision was the fact that the declaration does not include a clause on the departure of Bashar Al-Assad from the presidency.

Exactly with the same success "oppositionists" may demand the moon from the sky. Requirements must be based on objective laws and the Constitution, otherwise they turn into an empty sound.

In addition, one of the main points - the choice of a political future by the Syrians themselves on a democratic basis - is the very point on which the “opposition”, wish it a truly peaceful settlement of the crisis, could enter into a fair fight and nominate wishes

But the fact of the matter is that this “opposition” is controlled exclusively by the will of their masters from abroad, who need only the head of the defiant leader, and not a peaceful settlement of the Syrian crisis, despite all their hypocritical statements.

The rejection of this document clearly shows that the “leaders” of the puppet “opposition” are dying to death with Bashar Al-Asad in a fair fight, in a fair political contest for votes. This can be explained only by the fact that they and their masters from abroad are well aware that the people of Syria support their president. Therefore, the United States does not even consider the option of elections under international control, despite the fact that this particular option would be the most reasonable and, most importantly, fully based on the Constitution and on the principles of true democracy. I would stress that true democracy, and not the bloody one, which the United States and NATO have been covering for decades for decades, interfering in the internal affairs of sovereign countries, killing women and children, bombing peaceful cities ...

At the same time, the “oppositionists” are trying to base their unlawful and absolutely unrealistic claims that, supposedly, the Geneva communique requires the transfer of power to the transitional government.

However, the Geneva communique did not say a word about the fact that the president should delegate authority to a “provisional government”. But such a government can be formed with the participation of all forces - the legitimate government and the opposition. But it is clear that those representatives of the opposition who seriously intend to work on the future of the country rather than hanging around in other countries, hiding from justice, should enter it. In addition, in all countries, the president and the government are different institutions of power. Therefore, the Geneva communique does not offer any departure of the legitimate president. But the false “opposition” sees only one thing everywhere: that the head of state should just go, without asking the opinion of the people who elected him, into oblivion.

There are other items in the Geneva communique that were included in the declaration proposed by the government delegation - the need to respect the sovereignty of Syria and the principle of non-interference in its internal affairs. These are the principles that the “opposition” delegation and its owners particularly hate.

As stated by presidential adviser Busein Shaaban: "All those who declare the creation of a transitional government a priority - in fact, do not think of either Syria or the Syrian people. The Geneva communique says about the need to create an atmosphere for the political process in Syria."
The USA, as the main owners of the cardboard "opposition", is already striving to encourage it for its "good behavior" at the Geneva-2. They intend to resume assistance to the militants across the Turkish-Syrian border. (Earlier, a month ago, the United States suspended this assistance because of the conflict in the ranks of the militants, when terrorists directly associated with al-Qaeda seized the warehouses of those whom the United States considers moderate).

On this occasion, the Syrian delegation proposed a draft statement, which condemns this step, as the weapon falls directly into the hands of Al-Qaida. But, as was to be expected, the obedient US “opposition” also rejected this statement. Thus, it showed its close and inextricable link with Al-Qaida.

As stated by a member of the UAR delegation, Deputy Foreign Minister Faisal Al-Mekdad, the delegation of the “opposition” and its patrons are deliberately trying to bring the Geneva-2 conference to a standstill.

He stressed that the declaration presented at the “Geneva-2” reflects the interests of every Syrian citizen and is consistent with the Constitution of the country. And the one who rejects it, in particular, the points on the rejection of foreign interference, has no idea about patriotism and national dignity. "Rejecting the political declaration, the delegation from the" opposition coalition "thereby rejects the transformation of Syria into a multi-party state with the rule of law, an independent judiciary and a cohesive society of diverse cultural diversity," he stressed.

As for the opposition’s “opposition” clause on combating terrorism, this is contrary to UN Security Council Resolution No. XXUMX, which obliges all countries of the world to fight manifestations of terror.

At a press conference following the Russia-EU summit, Russian Foreign Minister Sergei Lavrov commented on the current situation around Geneva-2: “We declare that it is unacceptable to focus on simplified, primitive requirements. The easiest way to say that Assad should go, and everything will fall into place. However, we remember Yugoslavia, where everyone demanded Milosevic’s departure, we observed Iraq, where there was a similar approach to Saddam Hussein, Libya and Gaddafi. We see what all this led to. ”

According to him, today, some parties are obsessed with the idea of ​​a change of power in Syria only because someone personally hates Assad. “However, this is not the behavior of mature people,” the Russian diplomat concluded.

But the US leadership does not want to admit its own crimes, as a result of which Yugoslavia, Iraq, Libya have already been destroyed, and now - Syria is bleeding to death. Therefore, the delegation of the so-called "opposition", dependent on Washington, and rejects all reasonable proposals for overcoming the crisis.

Ctrl Enter
Noticed oshЫbku Highlight text and press. Ctrl + Enter
We are
Results of the week. "Of course, he is guilty, but he ... is not guilty ..."Geopolitical mosaic: Turkish Prime Minister Erdogan is called “another Putin”, and Radzivinovich thinks the Kremlin will prolong the life of sober Russian officials to 150 years
Military Reviewin Yandex News
Military Reviewin Google News
26 comments
Information
Dear reader, to leave comments on the publication, you must sign in.