The world's first experiment on trapping space debris with a net is being prepared. 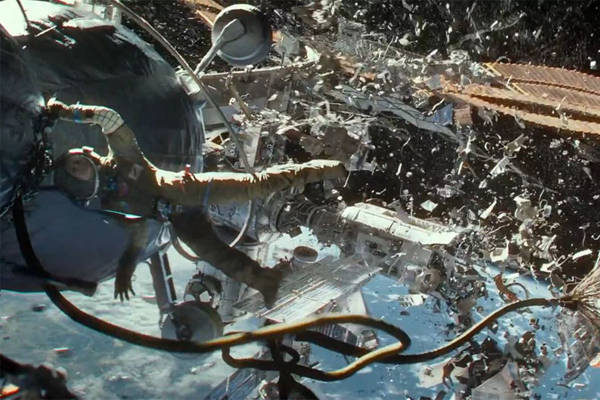 Is space junk dangerous? How to start cleaning the orbits? What do you need to solve legal problems? What projects are offered? This correspondent "RG" talks with Vladimir Agapov - a senior fellow at the Institute of Applied Mathematics. Mv Keldysh, who is the head organization of the Russian Academy of Sciences on the problem of space debris.


So, the leading space powers from the words about the danger of pollution of outer space, finally decided to get down to business. The pioneers will be the Japanese, who in February will test the system of such purification. But is this true? After all, years go by, the danger of garbage is talked about a lot, but by and large no serious accidents have happened because of it. Maybe let it fly, and do not need to spend huge money?

Vladimir Agapov: Let’s see for a start what is actually being discussed. What is space junk? According to experts, more than 650 thousands of different objects with a size of more than one centimeter rotate around the Earth. Of these, only large, more than 10 centimeters, of which there are about 22 thousands, are currently being tracked. The remaining hundreds of thousands are incognito, "Mr. X." But there are even smaller, about a millimeter, their number is estimated at about a million 3,5 objects. 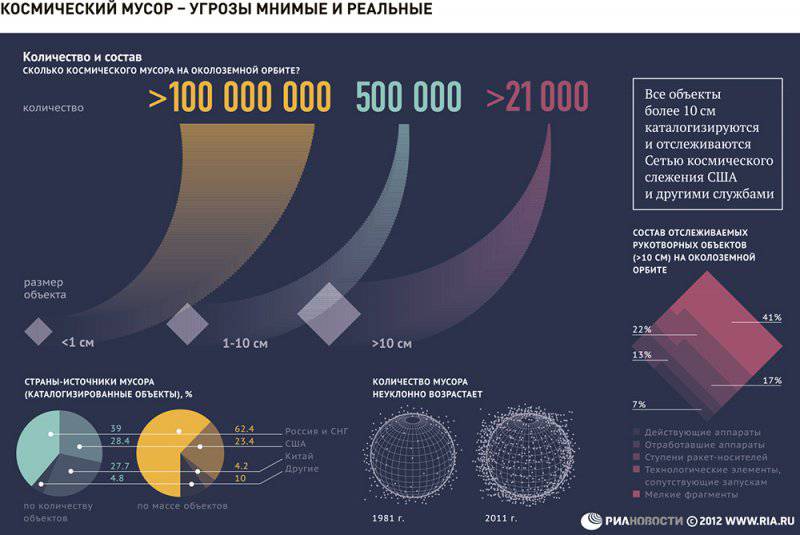 The most unpleasant thing is that this armada is constantly growing. Not only because more and more spacecraft are sent into space, which, in the end, also become rubbish. The trouble is that the “dirt” itself is not passive. After all, fragments flying at a tremendous speed collide with each other, collapse, generating hundreds and thousands of new objects for many years. It is not by chance that the removal of the ISS and other spacecraft from the course of a possible collision with space mud is increasingly reported.

But when they talk about collision avoidance, then we are talking only about fairly large fragments that are constantly monitored by special locators and telescopes. But much more in the orbit of a small placer, which no one can track, but which is also extremely dangerous. It is known that in the frontal windows of a number of spacecraft after landing they revealed microcracks of such critical dimensions that the apparatus was completely depressurized. Understanding all these problems, the space powers are now dramatically stepped up work to combat space debris. Here you can not miss the time, bring the situation to the brink, when the problem perezreet and it will be too late.

But the Japanese are already ready to be the first to start cleaning ...

Vladimir Agapov: This is not entirely true. It is only about testing one of the many options. No doubt, it is important, but rather, to attract attention to the problem. In fact, before seriously taking on specific projects, it is necessary to make an inventory of all space debris. Where and what flies, how dangerous are these objects. At the moment we have far from a complete picture. In low orbits, up to three thousand kilometers above the Earth's surface, approximately 80 percent of garbage dangles, at high, and above all geostationary, and this is about 36 thousand kilometers above the Earth, and intermediate elliptical orbits - the remaining 20 percent.

It would seem that an urgent need to take up the low orbits, where the lion's share of garbage has gathered. But on the other hand, the geostationary orbit is no less important for us - after all, around 430 devices are now working on it, each costing tens or even hundreds of millions of dollars. Thanks to them, we have the Internet, satellite TV and a host of other amenities. And unlike low orbits, the geostationary is only one, and we cannot lose such a unique natural resource.

That is, before you take up the space mop, you need to decide on priorities?

Vladimir Agapov: Of course. And it is not necessary to start with coarse dirt. It may turn out that it flies where there are no operating vehicles. Such fragments in the near future is better not to touch, especially if they do not collide with each other. But it is not enough to single out the dangerous grouping, it is already necessary to understand in it what is most dangerous. That is, to build a tree of priorities. And only after that start spending money on cleaning the orbits. Otherwise, the effect of all this cleaning will be scanty.

Or maybe at the same time countries should come to an agreement in order not to litter at all? Stop pollution?

Vladimir Agapov: At the initiative of the UN, a number of such measures have been developed, agreed by various countries. There are some pretty obvious ideas here. For example, if a satellite or rocket stage has worked, then they must either be led away from a given orbit to a lower one, from where they will be lowered by braking and burned in the atmosphere. Or even drown in the ocean. This applies to large objects, but much more detail, which is separated when the devices are started up and during operation - all sorts of nuts, bolts, etc. The obvious solution: to create such structures so that nothing is separated.

But the main supplier of garbage is explosions in orbit. The reasons are very different. Most often the residual fuel explodes. The fact is that after the satellite is put into orbit, the components of the fuel remain in the rocket stage, including self-igniting. While the tanks are intact, nothing terrible happens, but if, say, the micrometeorite breaks through the wall, an explosion occurs, and the stage shatters into thousands of small pieces. Therefore, after the completion of the flight program, it is recommended to open special valves in order to drain the remaining fuel in the form of gases.

What projects are offered today to clean up the accumulated garbage? How effective is the method that the Japanese will experience?

Vladimir Agapov: The Japanese project assumes that a special satellite will put an electrodynamic trawl into orbit and deploy. It is a metal mesh with a length of 300 meters, a width of 30 centimeters, and the thickness of the filaments is about 1 millimeters. The trawl will move in orbit, generating a magnetic field and capturing some of the small debris. After a few months, the "net" with the catch under the influence of the magnetic field of the Earth will change the orbit and enter the dense layers of the atmosphere, where it will burn.

The project is pretty obvious, but the question is, will such trawl collect a lot of garbage? Indeed, in spacecraft there are not so many materials that are magnetized, mainly non-magnetic aluminum alloys, various dielectric films are used, and recently composite materials are used. Today, many other projects are being considered. For example, it is proposed to use lasers. But this option immediately raises a lot of questions. How to direct a beam at a small object that nobody sees? It is not clear. They say we will fight with the visible. For example, having directed a laser beam at it, we will push the object. But where? Who can predict where he will fly if he does not know the shape of the object, its mass, material? As a result of such an impact, the object may become even more dangerous, collide with some kind of working apparatus.

In my opinion, one of the most interesting ideas is the use of various braking systems. For example, after the end of the work period, the satellite throws out a “sail”, “parachute”, or simply a large balloon that is inflated with gas. As a result, the area of ​​the whole structure increases dramatically, which greatly inhibits it. The device will quickly reduce the flight altitude, enter the dense layers of the atmosphere and burn.

In science fiction films in orbits, various manipulators have long been operating that clean and install satellites and other equipment. Such projects are in the portfolio of scientists?

Vladimir Agapov: Of course. But they are technically probably the most difficult. After all, a large garbage object has a mass of up to several tons and rotates in a complex way, it is not manageable. It has great inertia. How to capture it and not destroy at the same time neither the manipulator nor the spacecraft itself, on which the manipulator is installed? Here it is necessary to solve complex technical problems.

But in addition to purely scientific and technical, there are other problems. After all, this way you can remove not only debris, but also other spacecraft, even working. That is, in fact, these are dual use systems - civil and military. Therefore, there is an important legal aspect in the fight against space debris. On the one hand, space debris flies in orbit, but on the other, even "dead" objects that have worked their life belong to someone. And the attempt of one of the countries, even with the best of intentions to remove someone else's object, can lead to very serious conflicts. This means that such operations must be carried out in a coordinated manner with all participants so that additional risks do not arise. The world community is working on these issues today, because everyone understands: any sudden movement can lead to unpleasant consequences for everyone. By the way, even if we suddenly stop flying into space at all, the amount of garbage will still increase. Estimates show that only due to the mutual collisions of already flying fragments through 20-30 years, the increase in debris will exceed its loss as a result of natural deceleration processes in the upper atmosphere and de-orbit.

Ctrl Enter
Noticed oshЫbku Highlight text and press. Ctrl + Enter
We are
Trash puzzleSpace systems of the US military communications: analysis of the state and development
Military Reviewin Yandex News
Military Reviewin Google News
8 comments
Information
Dear reader, to leave comments on the publication, you must sign in.