Self-propelled artillery mount "Object 261" was developed in the design bureau of the Chelyabinsk and Leningrad Kirov plants on the basis of an experimental tank IS-7. The engine used was a modified ship diesel M-50 of high power. A lightly armored open pilothouse housed a powerful 152 mm M-31 gun, it was developed in the design bureau of Perm plant No. 172 on the basis of the ballistics of the Br-2 gun and was unified in a number of parts with the M-51 tank gun. The M-31 gun was tested in October 1948. The project of self-propelled artillery mount "Object 261" was developed in 1947.
Despite the failures with the previous high-powered power-assisted self-propelled guns, the idea of ​​putting super-power cannons on self-propelled chassis did not leave the Soviet leadership after the war.

The deeply modernized gun Br-2 received a new name - M-31. The modernization was carried out so deeply that little remained of Br-2. Design work carried out KB plant number 172. The main differences from the Br-2 were the following: not a piston, but a horizontal wedge semi-automatic shutter, a powerful slit muzzle brake that absorbed up to 70% recoil energy. The barrel of the gun was supplied with a massive breech to obtain the required weight of the sliding parts and to better balance the swinging part. The loading of the new gun was separate-sleeve. Send projectile was made with the help of spring rammer, cocked automatically during rollback. The mechanism for blowing the barrel bore worked the same way automatically. It used compressed air from a separate cylinder. The rollback brake was made hydraulic, and the pneumatic knuckle was pneumatic. Two cylinders brake recoil and two cylinders knurled made rigidly connected with the barrel. Thus, due to the breech and recoil devices, the weight of the rolling pieces was significantly increased, which, together with the muzzle brake, gave a very small pullback for a gun with such ballistics (520-mm against 1400-mm in Br-2). The lifting and turning mechanisms of the gun were of a sector type with a worm self-braking link. The lifting mechanism had only a manual drive, since the GAU electric drive requirement was removed (a rather strange decision). The M-31 gun had a TP-47A sight for direct aiming and a ZIS-3 sight for firing from closed positions. And finally, this gun was originally designed with the unified X-mm X-mm tank gun M-152, which had the same ballistic data.

The technical design of the M-31 cannon, finalized and coordinated with the Chelyabinsk plant, was sent for review and conclusion to the Artcom GAU at the end of 1947. The gun turned out just unique data. The firing range of the gun was almost 28 km (27800 meters) with the initial velocity of the projectile in 880 m / s. However, the 715 object submitted by the Chelyabinsk Plant (later it became known as the EC-7 tank) was not approved, and it was returned to the plant for revision. In this regard, a radical revision of the entire gun layout was required, although there were no significant comments when reviewing its technical design.

Considering the first design experience, the plant No. 172 was asked to coordinate the design of the gun with the design of the ACS based on the EC-7 tank (ob. 261) developed in Leningrad. This work was performed by plant number 172, and 23 of August 1948 was presented to GAU for review by the revised design of the M-31 cannon, already applicable to the combat compartment of the SAU based on EC-7. However, the project and this ACS (object 261) was also rejected. And again NTK BT proposed the Leningrad Kirov Plant to redo the layout of the entire self-propelled gun. Plant number 172 again had to change the design of the gun, or rather, its machine, because the swinging parts of the gun had never changed. By the way, we can conclude from this how close the EC-7 was to the conveyor. On the basis of experienced unapproved chassis, our designers did not develop ACS. But let's touch on a bit the project itself ACS as a whole, as I said above, it should have been made on the chassis of the EC-7. It should have been installed modified ship diesel M-50 power, as much, 1050 hp (same as on the EC-7). With such a motor, according to the designers, the ACS had to reach speed in 55 km / h and had a cruising range in 300 km. As for the ammunition, then in the project SAU it has not yet been approved. 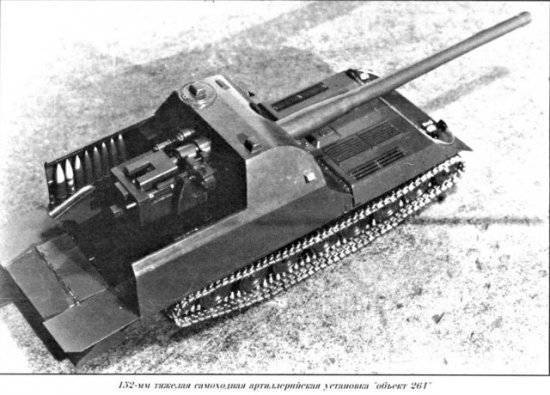 The gun and the calculation should have been placed in the lightly armored open wheelhouse. This suggests that the designers of this SAU did not plan its participation in tank duels. But the SAU base was left well armored (apparently for the sake of unification with the EC-7) and it had armor from 215 to 150 mm (by the way, where did I plan to install armor plates on the ACN in 215 mm I did not understand, because, on the IS- 7 had only a tower of such thickness of armor, but on the ACS it was not. But these are the data of the official self-propelled guns).

It is not difficult to guess, with such data self-propelled was more than heavy. Her weight was supposed to be somewhere around 68 tons. True, and her donor IC-7, the mass was approximately the same.

It should also be noted that the alteration of the chassis of the EC-7 tank was assumed to be rather deep. The ACS was supposed to be based on, as it were, back to front of the deployed chassis. That is, the engine, and the drive wheel, should have been located in front of the self-propelled gun.

This ACS also did not see the light even in the experienced performance. After it was decided to abandon the production of EC-7, this project, of course, was also rejected. 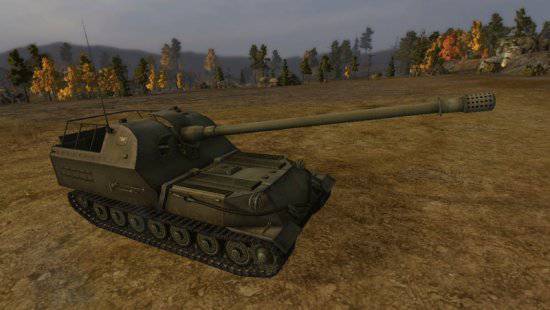