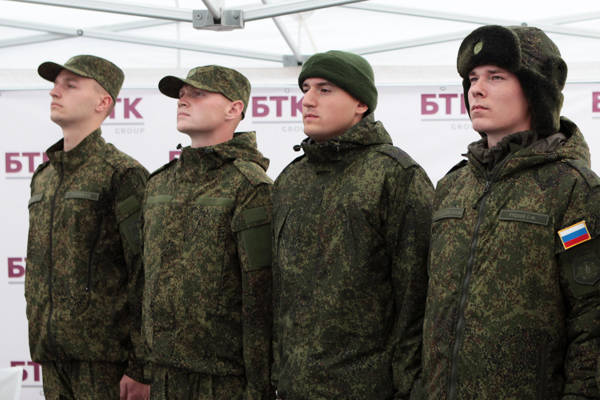 With the onset of frost, the army authorities start the “prick”. A rare week passes, so that the garrisons do not report on a massive illness, or even the death of soldiers.


Cold and viral ailments have long become a real scourge of the army. This year is no exception. Pneumonia, acute respiratory viral infection and influenza with ruthless waves are rolling not only in the Ural, Siberian and Far Eastern military camps, but also in military units of the West of Russia. Here is a very recent case - in the first decade of January, four soldiers died from viral-bacterial pneumonia in the Podolsk hospital. Three of them served in the Moscow Region brigade, one in Kovrov.

And today it became known that military investigators opened a criminal case on the fact of death in the same hospital of privates Pavel Kalinin and Ilya Morozov. Both physicians also diagnosed bilateral viral-bacterial pneumonia. Now, some of the officers will have to answer for the negligence that entailed by negligence the death of a person. This is how this crime is interpreted in part 2 of the article 293 of the Criminal Code of the Russian Federation.

The patient Ilya Morozov was brought to Podolsk from the Ostrogozhsk training center. According to the human rights ombudsman in the Voronezh region (this is where the military unit is located) Tatyana Zrazhevskaya, the disease was already crippled in the garrison around 300 servicemen. But it is especially disturbing that the constancy with which every winter Ostrogogozhskoe school book, in the literal sense of the word, is reeling. Suffice it to recall that in 2011 there soldiers were hospitalized with 40 pneumonia. And when the military prosecutors and the Moscow authorities came to the garrison with the check, it turned out that the temperature in the barracks did not rise above 15 degrees, there was no hot water, and the soldiers were walking around the clock, sleeping in wet clothing and underwear.

The noise was great, some of the command of the unit were then roughly punished, and there was a report to all instances: there would no longer be such disgraces in the garrison. But the officers didn’t make any serious conclusions. This is evidenced by the current events in Ostrogozhsk.

But how do they explain the tragedy of private Morozov in the Ministry of Defense?

“The serviceman’s treatment was carried out from January 5 after the unit officer discovered signs of a cold and sent him to the unit’s medical center. In an interview with the soldier, it was found that he felt 28 December 2013 of the year, but did not give them due to deterioration, on January 8, to continue treatment, the soldier was transferred to a military clinical hospital with a diagnosis of “severe viral-bacterial pneumonia.” The Defense Ministry claims that the treatment of a soldier rohodilo with the use of necessary drugs and specialized medical measures.The leading specialists of the Main Military Clinical Hospital named after NN Burdenko were attracted to this work.Medical doctors noted the mixed viral-bacterial nature of the disease, which is characterized by an extremely severe course of the disease. intensive care, to save the life of a soldier failed.

The defense department claims that all military personnel who came into contact with the patient are isolated, and additional medical examinations are being conducted at medical institutions. Now the training center employs specialists from the Main Military Medical Department of the Ministry of Defense and the central military medical institutions. Their task is to assess the epidemiological situation in part and the level of provision of medical institutions with necessary medicines. Experts are also checking how hygiene standards are observed in the garrison. "The servicemen of the training center, who detect the primary signs of a cold, are immediately sent to medical institutions for examination and treatment with mandatory isolation from the rest of the staff. At the same time, all the sick are fully provided with qualified medical assistance," service and information of the Ministry of Defense.

It is difficult to verify the objectivity of these words while sitting in Moscow. But, apparently, it all is. However, many questions arise. Why, year after year, army commanders lift up one and all on the ears after the soldiers are piled on hospital beds? Do previous tragedies teach their commanders and military doctors nothing? When, finally, in the army will seriously engage in the prevention of colds and viral diseases?

And one more problem immediately rises on the agenda. This is about the competence of officers who have been entrusted with the life and health of soldiers. If the commander did not even teach them to properly wear a uniform, one should hardly expect that he will prepare good warriors from these guys. And if the military doctor could not recognize the dangerous disease from the soldier at the initial stage, then why is such a doctor needed in the army at all? Incidentally, there was information that the head of the Ostrogorsky school before the New Year committed suicide - when a soldier began to suffer from mass sickness, the doctor seemed to have lost his nerve. In the garrison, he is remembered with respect and quite understandable bitterness. They say that this was a dedicated man who even bought with his own money rare medicines for sick military personnel.

Here is an example of a different kind. One of the soldiers' mothers told the RG correspondent that in a military unit near Moscow, where her son serves, the medical officer managed to give new vaccinations to new recruits at the same time. And the body of five recruits with such a "shock" prevention failed.