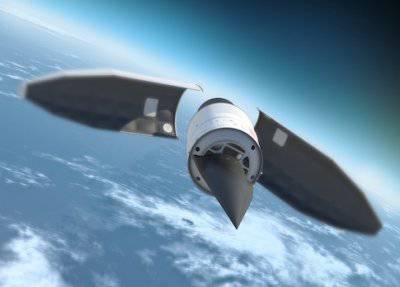 China’s recent test of a new “ultra-speed” strike vehicle raised growing fears in the Pentagon that this country could catch up with the United States in this area of ​​high-tech military technology in just five years, January reports freebacon.com on 28.


On January 28, during a hearing at the Congressional Committee on Armed Forces, US Deputy Secretary of Defense for Procurement, Technology and Logistics Frank Kendall said that, against the background of Chinese success, he is concerned about large-scale defense budget cuts that undermine efforts to maintain US military superiority.

The Pentagon is investing resources to create two types of hypersonic weapons - on ballistic and cruise missiles. These vehicles can maneuver at speeds up to 10M (7680 miles per hour). “High speed makes it difficult for them to be intercepted by missile defense,” he said. He expressed concern that China’s work in this area could outpace American technology in the future.

9 January China conducted a hypersonic test apparatus, which in the Pentagon received the designation WU-14. This weapon can be used to break through the US missile defense system, be used to deliver nuclear or conventional high-precision strikes, including against aircraft carriers on the high seas.

US officials say China’s work in this area was not a secret, but a successful test showed that Beijing was moving much faster than previously thought. US Commander Pacific Command, Admiral Samuel Locklear, said that China’s test of hypersonic weapons demonstrated its ability to progress rapidly, which complicates the security situation.

Also speaking to Congress, the director of strategic plans and policies of the Joint Chiefs of Staff (USCS) of the US Armed Forces, Vice Admiral Frank Randolph (Frank Pandolfe), said he would express his opinion on the Chinese hypersonic weapon "behind closed doors."

According to Kendall, China is focusing its efforts on the creation of space surveillance systems, cyber warfare, conventional high-precision ballistic and cruise missiles capable of hitting both stationary and moving sea targets, such as aircraft carriers, air-to-air missiles, fifth-generation fighters, modern ew systems. In the next few years, China will adopt the fifth-generation fighter J-20, and will also export military aircraft, he said.

Over the past few years, the Obama administration has cut defense spending by more than 500 billion, which undermines US efforts to create high-tech weapons. Last year, the Pentagon sent about 65 million to develop hypersonic weapons as part of creating rapid global strike systems, and another 46 million was allocated to research on hypersound conducted by the Agency for Advanced Military Projects DARPA. After two flights, further tests of the Lockheed Martin HTV-2 hypersonic demonstrator have been postponed. This unit is designed to fly at speeds of 20, or 15224 miles per hour. Boeing is developing a planning device with a X-51 Waverider hypersonic jet engine, the US Army is also working on hypersonic missiles that can be used in the US missile defense system.

Kendall said that today is “a very convenient time” to talk about the future of American weapons. According to him, relations with China are “uncertain” and the United States should be ready to meet the challenges, there is a promising set of weapons and technologies that require more funds for development than is being done today.

Ctrl Enter
Noticed oshЫbku Highlight text and press. Ctrl + Enter
We are
US will increase the pace of production of fighter F-35
Military Reviewin Yandex News
Military Reviewin Google News
20 comments
Information
Dear reader, to leave comments on the publication, you must sign in.