February 1 2014
72
In November last year, the third plenum of the Central Committee of the Communist Party was held in the PRC. At the plenum, it was decided to change the policy on birth control. Relaxed “rules” on birth control have not yet entered into force. The decision of the plenum is still questionable and will be re-examined in February. If accepted, it will take effect in March. In this case, Chinese family couples will be able to have not one, but two children, - provided that at least one of the spouses was the only child of the parents. 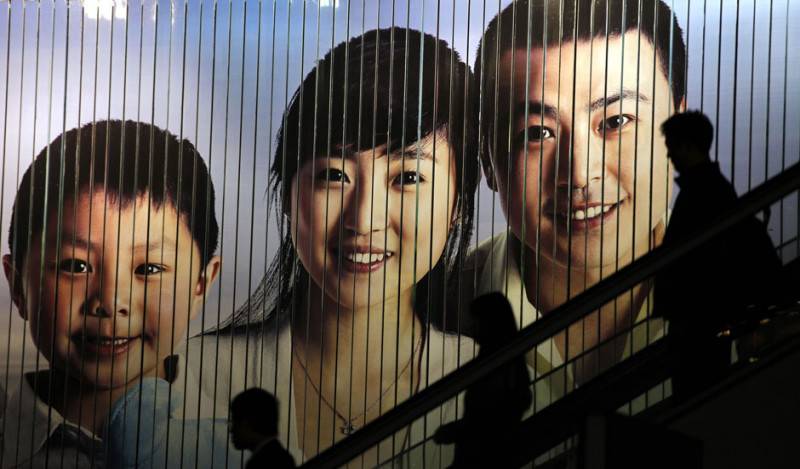 The resolution of the November plenum announced, in fact, a new policy of state family planning. True, with the proviso that this very policy will be refined and improved. The February meeting of the party will probably provide some clarifications.

In any case, the statements of the leaders of the Chinese Communists about the refinement and improvement, as well as about the long-term balanced development, are not empty words. The new policy has already been partially tested.

A few years ago, the Chinese authorities allowed citizens to have a second child — the families in which both parents were the only children. Permission for two children was given to families living in rural areas, provided that their first child is a girl.

By the way, the last is easy to understand: in China, girls do not like to give birth, the main breadwinner of the family is a man. Therefore, many Chinese women prefer abortions until they become pregnant as a boy. The result of these abortions gave rise to an imbalance: the Chinese census of the population 2011 of the year showed that there are about 20% more boys born in the Middle Kingdom than girls.

Ali Aliyev ("Voice of Russia") notes that there are more men in China in 34 million than women.

“To stand aside, pulling a handkerchief in their hands, Chinese women are clearly not threatened. Over the past year, the population of mainland China grew by 7 million and reached 1 billion. 360 million. At the same time, the number of men in the country exceeded 697 million, and women only more than 663 million. More than 34, the millionth difference may turn out to be more, because the statistics do not take into account data for Hong Kong and Macau, as well as the population of Taiwan.

The tendency to increase the "Chinese muzhikovatosti" more than a dozen years. Beginning with the 80s of the last century, there were more and more boys in China. By 2005, 100 boys were in 120 girls, and in two years 124 was already there. And these are average figures for the country, although in some provinces the predominance of boys comes to 140 per hundred. Demographers consider this to be the result of a longstanding policy of the authorities aimed at reducing the growth rate of China’s population. ”

The author reminds that at the same time, the number of Chinese who are over sixty, that is, the elderly, is 202 million (almost 15% of the population). Today, every tenth Chinese (132 million, or 9,7%) is older than 65 years.

Two months ago, Mao Qunan, a representative of the State Committee on Health and Planned Childbirth of the PRC, said that over four decades, the policy of planned childbearing in China had reduced China’s population by about 400 million. According to him, who were quoted by the Xinhua agency, the birth rate in the PRC declined from 33,4 ppm in 1970 to 12,1 ppm in 2012, and natural population growth went from 25,8 ppm in 1970 to 4,95 ppm in 2012.

The slowdown in population growth has weakened human influence on the environment and somewhat solved the problem of lack of resources, which contributed to economic development, comrade Mao Qunan said.

It is necessary to note one more thing. The Chinese government is seeking to increase domestic consumption in the country in order to reduce its economic dependence on trends and crises of the world economy. At the growth of domestic consumption drew attention to the aforementioned plenum of the CPC Central Committee.

“The actual legitimization of the second child in young urban families can lead to the emergence of another 15 million children in China only in the year 2014. In addition to the positive long-term effect, it will be another incentive for the growth of domestic consumption ", - explains Stanley Chang, a professor at the University of Hong Kong.

After the November plenum in the Western press, analytical articles appeared with forecasts regarding the new demographic policy. Agency Xinhua made a special media review on this topic.

France Press called official Beijing's family planning policy a “key” transformation that will help slow the pace of aging of the Chinese nation. However, due to the fact that relief will affect approximately 1 million married couples, they will lead to a rather limited increase in the birth rate.

According to the New York Times, the intentions of the Chinese government are evidence of a easing of birth-rate planning throughout the country. Scientists and demographers say that after the introduction of new easing, population growth will increase by 1-2 million people per year.

The Finnish newspaper Helsingin Sanomat writes that mitigating the demographic policy will help the PRC to solve the problem of population aging and the imbalance in the ratio between men and women.

But the opinion of the Associated Press: the huge costs associated with the birth of a child have a negative impact on the desire of Chinese young people to have children, so the new demographic policy does not threaten to turn into a “baby boom”.

This opinion, alas, is not far from the truth. At the same time, it is necessary to look at the question objectively: after all, not only the high cost of living determines the desire of the husband and wife to have a child.

“We have one child, the second will not be. Two children, of course, well, but this requires conditions, and we are not so rich. There would be one to provide all the necessary "- declares young chinese woman

But statistics dating service. According to the weekly Nanfang Zhoumo, only about a quarter of those who want to find a husband or wife expect to meet a partner who would not have brothers and sisters, that is, a person with whom you can now have two children.

Putting on their feet and forming an only child in Beijing will cost parents over two million yuan. To accumulate so much money, the Chinese family with an average income will not have to eat or drink for twenty-three years, says Vesti correspondent Dmitry Sobiev.

This, in general, is not surprising. With the growth of the welfare of society, the birth rate is steadily decreasing. This is the case in the USA, the countries of Western Europe and in the post-reform years in Russia, which in the boom of unrestrained consumption imitates the same West.

The “Military Review” has repeatedly said that Europeans (Westerners) consider “investments” in children to be a disadvantage. Therefore, many couples either have an only child, or do not have children at all. The reason for the decline in the birth rate is not only in the economic crisis, which in Western countries affected far the whole society, but in the growth of egoism and extreme individualism. A person prefers to spend money on himself, on his pleasures, and not on children.

The same thing is true in Russia, in a consumer sense, already a quarter of a century equaling to the West. The development of a negative trend also contributes to the lack of ideology in the country. It simply does not exist, and it cannot be “developed”. If the USSR went from building socialism to communism and had corresponding gods - Marx and Engels and Lenin (Stalin was not always included in the list), then the oligarchic Russian Federation does not have “gods” (it was accepted to worship Gorbachev and Yeltsin only in the environment of so-called creative intelligentsia, which Ulyanov-Lenin would call an appropriate word), neither faith in a bright future, nor the enthusiasm of the masses about the "democracy". Western idols, people stopped praying in the early years of "market economy". In the name of Chubais, parents even began to frighten children. The democratic system of the state, which is sometimes written in the media, simply does not exist. There is socialism, and there is capitalism. There is no socialism as such for a long time, and Russians have not believed in a capitalist paradise for a long time. This paradise exists only on Rublevka, in the Kremlin and is distributed limitedly in the reserved palaces, dachas of our rulers. It is like a different planet.

But in China, the state ideology exists. In the Middle Kingdom - the socialist system under a one-party system of government. At the same time, there is an active struggle against corruption and the luxurious lifestyle of state officials. In the West, official Beijing is criticized for the excessive role of the state in the economy, for administrative imbalances in management, for the lack of democratic transformations here and there - but in fact it is a criticism by the capitalists of the socialist system opposing them, into which the Chinese authorities have quite successfully implemented market elements. The rapid growth of the Chinese economy is an excellent proof of success. For thirty years, the PRC has escaped into the first economies of the world, and in a few years it will be equal to the United States. The strategy of the Chinese governments turned out to be accurate, cunning, prudent and materially through and through — like all modern science. Being determines consciousness, and point. Western corporations began to transfer production to regions with cheaper labor - and the Celestial Empire used it with extraordinary profit for itself. Since 90-ies of the last century, it has turned into a global factory. At the same time, Americans and Europeans were losing a lot of jobs, factories and offices were closing. The capitalist fiasco of the West led the banal pursuit of corporate owners for profit. One insatiable bourgeois competed with another, and as a result, almost all the production safely moved to China. At the same time, China attracted foreign investment from the huaqiao - Chinese living abroad. Therefore, it becomes funny when you hear the Western criticism of the Chinese economy. If earlier everyone was equal to the capitalist West, now heads are turning to the socialist East.

If the government of the Celestial Empire, thanks to the new birth rate policy and other measures, succeeds in strengthening domestic consumption and solving the problem of the aging of the able-bodied population, the negative attitude of many young men and women to the birth of children will change. The success of government policy in the country will lead to a rise in the birth rate.

By the way, in the Middle Kingdom there is even a real Chinese dream. Yes, of course, national. This is the rebirth of the great Chinese nation. Yes, great, and yes - Chinese. And in the era of economic globalization, when the “global factory” became almost irreplaceable, this same dream, notice, affects the entire globe. And this situation can not but inspire the Chinese.

Observed and commented on Oleg Chuvakin
- especially for topwar.ru
Ctrl Enter
Noticed oshЫbku Highlight text and press. Ctrl + Enter
We are
Family policy of Russia. Without a healthy family there will be no strong stateDo the Chinese want children?
Military Reviewin Yandex News
Military Reviewin Google News
72 comments
Information
Dear reader, to leave comments on the publication, you must sign in.