Defense-tested complex. Prosecutor General's Office acquainted the military and the Ministry of Industry and Trade with the devastating results of the audits in the defense industry 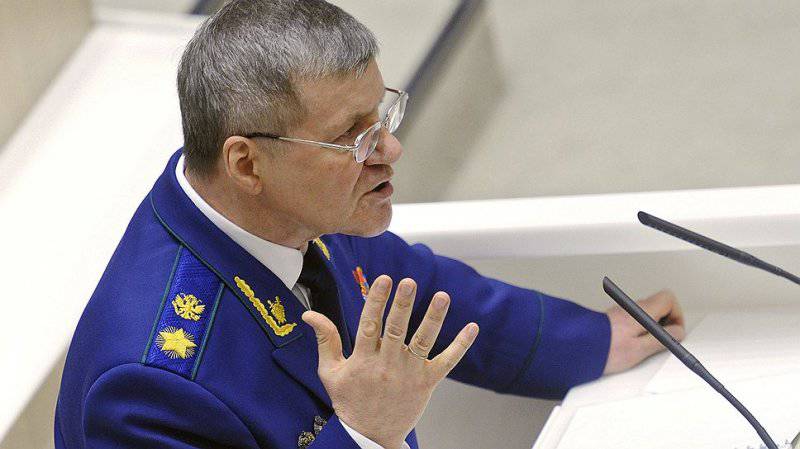 29.01.2014 leadership of the Prosecutor General, the Ministry of Defense and the Ministry of Industry and Trade held the first joint meeting of the board, which discussed the state of law in the military-industrial complex (DIC). The conclusions are disappointing: aviation and shipbuilders invest budgetary funds in commercial banks in order to extract their own benefit, the leaders of industry enterprises often are themselves the organizers of theft, and the Ministry of Industry and Trade has simply “withdrew itself” from monitoring the implementation of targeted programs.

According to the Prosecutor General of the Russian Federation, Yuri Chaika, who spoke yesterday at the board, as a result of the MIC checks, "numerous facts of the overpricing of contracts were revealed." In the United Aircraft Building Corporation (UAC) and the United Shipbuilding Corporation (USC), 48 initiated criminal cases involving embezzlement and deliberate bankruptcy of enterprises. "Another 43 material is at the stage of pre-investigation checks," he added.

In the background documents prepared by the departments for the meeting (available to Kommersant), it is said that according to the results of inspections in 2012-2013, prosecutors revealed about 7 thousand violations in the field of state defense order. The Federal Service for Defense Order in 2013 revealed violations for 35 billion rubles, of which 14 billion rubles were unauthorized use of funds. In the interests of the Ministry of Defense last year, 87 government contracts were not executed, advance payments for which were made by 80%. In addition, in the opinion of the auditors, the corporations have not fulfilled the statutory tasks of integrating organizations into a single complex, and strategic failures have led to "serious negative consequences."

Prosecutors found that the financial condition of USC organizations deteriorated: the money allocated by the state for their rehabilitation was not used, and the corporation actively placed them on deposit accounts of commercial banks. According to prosecutors, over three years more than 34 billion rubles have been placed, and 200 million rubles received as interest on them. spent on current activities and payment of bonuses. It was also noted that weak personnel work contributed to the participation in the theft of direct managers of enterprises. For example, in October 2013, the authorities of the Baltic Plant illegally transferred property to commercial structures for 23 million rubles. And in the Khabarovsk Territory, a criminal case was initiated into the theft of more than 300 million rubles. using the bill of exchange system - by creating an artificial debt of the Amur Shipbuilding Plant to companies registered in Cyprus.

In the part of the naval fleet as of December 2013, the amount of debt owed by order executors was more than 21 billion rubles: violations were identified, in particular, in the Far Eastern shipbuilding and repair center, the Baltic Yantar shipyard and the Zvezdochka ship repair center. The latter enterprise is also a defendant in the criminal case of embezzlement: instead of the proper equipment, one of the ships was used in the repair of counterfeit goods. "We will analyze the claims presented, and for those positions with which we will not agree, we are ready to give counterarguments," Kommersant told the USC yesterday, commenting on the devastating results of the audit.

According to prosecutors, things are no better at the KLA enterprises. The documents state that, despite the "unprecedented state support measures" in the amount of 70,5 billion rubles intended to restructure existing debts, their financial condition leaves much to be desired - the corporation's total debt for November 2013 of the year was over 260 billion rubles. The authorized capital of UAC due to a decrease in the value of assets of subsidiaries decreased by 30,7 billion rubles. Directed in the period from 2007 to 2012 year from the budget 50 billion rubles. for the implementation of projects for the construction of civil aircraft of domestic production were brought by the corporation to affiliated companies "on extremely unfavorable conditions": instead of donating to the authorized capital of companies, the money was provided to enterprises in the form of interest loans (sometimes up to 14,5% per annum). In addition to income from accrued interest, the corporation also received interest-free loans from its plants. In addition, the documents state that since 2007, the corporation has received about 4 billion rubles from its enterprises. dividends. While the societies themselves were forced to take commercial loans, the KLA was placed in 2011-2013 for more than 685 million rubles in order to earn income on deposits.

“Most of the comments relate to the initial period of the corporation’s activities in 2007-2010,” Alexander Tulyakov, UAC Executive Vice President, told Kommersant. “In 2011, many of the issues of interaction within the group were revised, the corporation abandoned a number of financial issues that were used before 2011. and management tools. " According to him, from the end of 2011 of the year, in accordance with the decisions of the management and the board of directors of the corporation, the practice of issuing interest-bearing loans to companies was discontinued: “in 2014-2015, it is planned to complete the procedure for paying additional shares of companies by offsetting monetary claims regarding payment of the principal amount of debt and accrued interest on previously concluded loan agreements. "

The prosecutors also stopped separately on the results of the inspection of the Ministry of Industry and Trade. According to the report of the Accounts Chamber, to which the supervisory authority refers, only half of all industrial enterprises are ready to carry out mobilization tasks for production. It is noted that the ministry lacks control over the targeted use of subsidies to prevent bankruptcy of enterprises: only 60% of organizations that received over 2009 billion rubles in 2013-14 have achieved financial recovery. "The Ministry has actually withdrawn itself from the fulfillment of customer duties for federal targeted programs, transferring these functions to subordinate enterprises and commercial organizations," the supervisory authority believes.

Prosecutors note that the tasks facing the Ministry of Industry and Trade are not being fulfilled. So, the indicators of the program "Development of civil aviation RF technicians for 2002-2010 and for the period until 2015 "in terms of sales in 2011-2012 were only 48% complete. For the first nine months of 2013, sales of final products amounted to only 24 billion rubles. Instead of the planned 144 billion rubles. None, according to the auditors, and monitoring the implementation of research and development work. "With the connivance of officials of the department, scientific developments of the past years are issued by manufacturers for new ones," the Prosecutor General’s office says. "And after that they report on the performance of the concluded agreements." The Ministry of Industry and Trade informally says that "they are ready to develop constructive solutions that will effectively solve the accumulated problems."