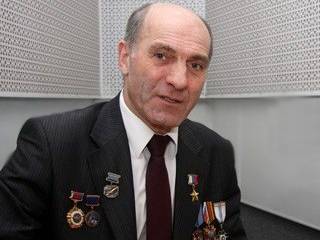 The head of the Ministry of Industry and Trade Manturov from the Duma podium within the government hour managed to insult the honored and caring people.
MP from the Communist Party of the Russian Federation Valentin Romanov asked what the minister can say in response to an open letter to President Vladimir Putin, signed by test pilots, Heroes of the Soviet Union and Russia, which was published in our newspaper (No. 45 (387) from 21 in November 2013) ). There are such words: “In the civil aviation industry of the Russian Federation, the worst crisis continues to develop. Its main reason is that the industry is managed by people who either have obviously criminal intentions or who do not understand anything in the subject. ” And such: “... D.A. Medvedev failed to deal with the real state of affairs in the civil aviation industry. Messrs. Poghosyan and Manturov received his signature on the civil aircraft industry development program, which does not take into account anything that could save both the industry and thousands of human lives. In it there was no place nor KB them. Tupolev nor KB them. Ilyushin. Only phantoms, more than half consisting of foreign components, like the same "Superjet".

In the Duma, Manturov confirmed that he was familiar with the letter. And it looks like it “hooked” him. Otherwise, how to explain that out of seven signatories, he chose Magomed Tolboev as the "opponent":

- I would recommend that these pilots better not engage in maintaining vegetable depots and the markets they sponsor, but really engage in development aviation.

Yes, the name of the hero of Russia M. Tolboev recently began to try to throw mud at obviously from someone's suggestion. And this man, who for many years has been the honorary president of the MAKS aerospace showrooms, has experienced all kinds of airplanes. What is happening today in civil aviation, he knows perfectly. By the way, Manturov indiscriminately sent “to the vegetable base” (almost, to ...) and the other pilots. Those who are not listed in millionaires. Live in retirement and salaries. Unlike Manturov, an admirer of expensive Porsche sports cars. I wonder - on what secret ministerial vegetable database, he earned so much?

At the above-mentioned meeting of the State Duma, the minister himself-sociologist, looking into the eyes of the deputies, told tales from the rostrum. The fact that we occupied 20% of the world market for tube-jets in the dimension of "Superjet". It is hard to believe that a leader of such a rank can publicly bear utter nonsense. Canadian and Brazilian manufacturers of regional airliners would listen to him - they would die of laughter. It seems that for calculations he chose his own special method, taking for analogies of the “Superjet” for statistics. If the plane is a little more or a little less - it does not count. At the same time announced 60% growth in the production of civil aircraft. Sounds, of course, proudly. In fact, this growth is provided by a little more than a dozen airliners, for the most part the same “Superjet”, which, by hook or by crook, dumping on prices, impose on airlines. At the same time diluting the budget of the United Aircraft Building Corporation (UAC) and the Ministry of Industry and Trade. But to the Minister of Happiness, they built more machines on 12 — a substantial increase appears in the reports. How can you not cheat the honored people?

- The Ministry of Industry and Trade spent enormous state funds for three years, but we didn’t see the results of this work ... Only as a result of inspections carried out last year in aircraft manufacturing and shipbuilding corporations 48 initiated criminal cases involving embezzlement and deliberate bankruptcy of industrial enterprises. Another 43 material is under investigation.

The Prosecutor General’s Office also learned that the Ministry of Industry and Trade, at inflated prices, financed research and development (R & D), which no one had thought to carry out. So is it worth for Minister Manturov to be rude to professional pilots who are concerned about the collapse of the aviation industry no less than the Prosecutor General? And wasn’t his efforts that the country was forced to transfer to used foreign cars? Manturov did not answer this question.
So it turns out - it is not difficult to embellish beautifully and brazenly from the State Duma rostrum. But how to powder the brains of prosecutors? It is time for the minister to become thoughtful and, as they say in places of imprisonment, to take the path of correction faster.

Ctrl Enter
Noticed oshЫbku Highlight text and press. Ctrl + Enter
We are
About Stalin and KhrushchevWhat you didn't want to know about England
Military Reviewin Yandex News
Military Reviewin Google News
14 comments
Information
Dear reader, to leave comments on the publication, you must sign in.