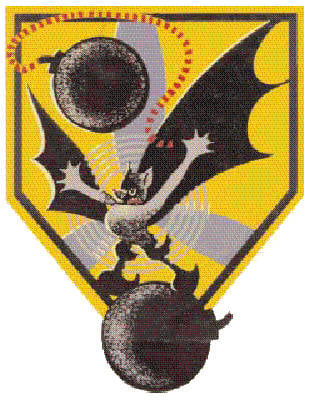 During the Second World War, the conflicting parties actively sought new methods of warfare to gain advantage over the enemy. In many countries, developed new types of weapons. However, this was not the only direction in which engineers and scientists worked. Considered many options for the use of animals in combat. For example, in the United States, the project was considered under the code “Roentgen”, which consisted of using bats as suppliers of incendiary bombs in the battle for Japan.


The idea of ​​creating this weapons owned by dentist Laytel S. Adams. A new type of weapons was a bomb with bats. The bomb itself is a huge, descending by parachute, empty shell, which is filled with bats, artificially hibernated. At a certain height, the shell should have opened up, and bats, awakened by warm air, would have flown out of it. Each bat attached a small charge with napalm. It was assumed that after the bats landed on houses and trees in Japan, small bombs exploded, causing significant fires. The effect on the fire during the operation was ten times greater than the effect caused by conventional bombardment. This project was approved by President Roosevelt, and at some point became one of the main American military strategies.

According to Adams himself, the idea of ​​bomb bombs came during one of the journeys. In an interview with the Bulletin of the National Speleological Society, given in 1948, the inventor recalled: “I just visited the caves in the southwestern United States in Carlsbad and was impressed by the flight of these animals ... Can a large number of bats be equipped with incendiary bombs and dropped from airplanes? "

In 1941, Adams returned to the caves and picked up several animals. In addition, he began to study in depth the bats. The dentist found out that free-tailed bats are the most common in North America. These mammals with a weight of 9 grams may carry a load 3 times heavier than themselves.

The first lady Eleanor Roosevelt contributed to the fact that this rather interesting project of a dentist Adams was indeed considered as one of the main types of warfare. At the time, Eleanor served in the OSS (Strategic Services Division). This plan was approved by the head of the OSS - General Wilm Donovan. With the filing of US President Franklin Roosevelt, the operation of operations using bomber bats under personal control was taken by the director of OSS.

The president asked the leadership of the air force to deal with the practicality of the project. In his letter, Roosevelt stressed that although the idea of ​​this weapon is extremely unusual, the inventor is “in his mind.” The project has allocated several million dollars. The CWS (Chemical Warfare Service - Army Service in charge of chemical weapons), in collaboration with the US Air Force, was assigned to conduct bombing mice.

Adams and a team of biologists set to work and began to search and visit places where bats lived in large numbers. These were mostly caves, although quite a lot of bats inhabited sheds, attics, landfills and other similar places.

The doctor himself told about this work: “Then we climbed about a thousand caves and three thousand mines. We were in a hurry, so we went day and night. I had to sleep in cars and replace each other while driving. ”

According to the military, bats are the perfect weapon. Firstly, the number of bats is enormous: tens and even hundreds of millions. Secondly, these animals can carry significantly more than their own weight. Thirdly, in the state of hibernation, bats do not require care and food. Fourth, they fly at night and sleep during the day.

Initially, researchers viewed Eumops perotis as a large carrier. The wingspan of these mammals was about 50 centimeters and theoretically they were able to carry a bomb weighing about 500 grams. However, it turned out that their number is relatively small, so it was decided to use Brazilian foldas. 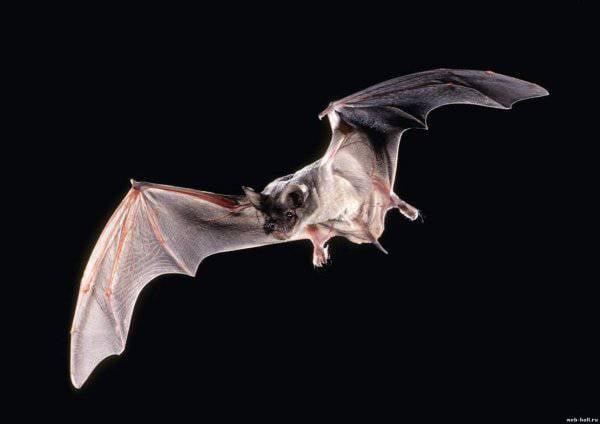 The second candidate for the role of carrier was the more common Antrozous pallidus. This bat was capable of carrying 85 grams, however, according to the researchers, it was not robust enough for the project.

Bats, which should have been used as a carrier of an incendiary device, are free-tailed bats. They had a mass of about 9-15 grams, but they were able to carry a load that was three times their own weight, that is, the animal could be loaded with 28 grams.

The largest colony of these mammals, numbering millions of individuals from 20 to 30, was discovered in Texas at Ney Cave. The colony was so large that in order to leave the cave in a dense stream, the bats needed about five hours.

Therefore, it was not difficult to catch these bats in the required quantity using nets. Several hundred "prisoners" were placed in refrigerated wagons (this caused them to hibernate), and several animals were taken by Adams to Washington to demonstrate the carrying of dummy bombs.

A container canister inside which bats were dropped from a plane by parachute. During the fall, it heated up - the mice woke up - it opened and released the arsonists (photo from biomicro.sdstate.edu)

For the "landing" of bats, it was supposed to use containers consisting of 26 shelf trays. Each regiment had compartments to house the 40 mice. Mice were “armed” with 17 or 28 gram napalm bombs. The development of the bombs themselves was Louis Fizer, an American chemist who devised how to use napalm for military purposes. Parachute dumping of containers was to be carried out at dawn from the height of the 1500 m from the bombers. Slow descent made it possible for mice to go out of hibernation. At an altitude of about 300 meters above the ground, the containers opened up, and the animals flew away over long distances due to their considerable height. Instinct-driven bats were staying for the night on roofs and attics, after which timers triggered, igniting bombs. Since most of the buildings in the Japanese cities of that time were built from flammable materials (wood, paper, etc.), the effect of such weapons should have been noticeable.

The design of incendiary bombs for bats was developed by Dr. Fiser (LF Fisser). Incendiary bomb - cellophane pencil case with thickened kerosene. The bomb itself was sewn on the chest of the mouse to the fold of the skin with a thread or surgical clip. Developed two variants of incendiary bombs: 1) with a mass of 17 grams, burning 4 minutes and giving a radius of ignition 25 cm; 2) 22 gram mass, burning 6 minutes and giving 30 radius of ignition, see. The miniature fuse is a spring-loaded drummer, which was held in place by steel wire. When the bombs were being prepared for use, copper chloride solution was injected into the cavity in which the steel wire was located. Copper chloride began to corrode the wire, and after 30 minutes, at the moment when corrosion corroded it completely, the drummer abruptly moved forward, hitting the primer-igniter and igniting kerosene.

According to Adams, the X-NUMX B-10 bombers, which carried 24 containers on board, were supposed to drop more than 100 million bomber bombs to the cities in Osaka Bay from Alaska. 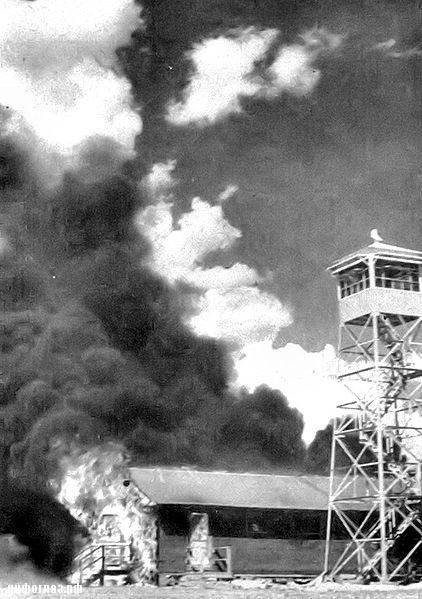 The result, presumably, of successful tests (photo from biomicro.sdstate.edu)

In March, 1943, with the participation of representatives from the US Air Force headquarters, conducted an experiment called "Test of Method to Scatter Incendiaries" ("Testing the arsonists' dispersal method"). The main goal of the experiment is to “Establish the possibility of using bats to deliver incendiary bombs to enemy targets”. 180 bombs with bombs loaded into a cardboard container and dropped it from the plane. At an altitude of about 300 meters, the container automatically opened, and the released mice flew to hide in their favorite places. Mice delivered bombs to buildings. The state commission recognized the weapon as effective.

For the next experiment, thousands of bats were caught around 3,5 in the Carlsbad Caves. From the B-25 from the 1,5 kilometer of the 21 kilometer in May of 1943, 5 containers with mice with bomb dummies were dropped. These tests were not so successful: the majority of mammals did not fully wake up from the “winter hibernation”, did not fly and, falling to the ground, broke. However, this was not the only complication: the cardboard boxes did not function properly, the surgical clips ruptured the delicate skin of animals, and so on.

The bosses of the air force later inspected a new weapon. In Calsbad, at the air base, a few bombs mice came out of hibernation. Having flown away, they hid in wooden hangars at the base, burning down these buildings to the ground. This incident also confirmed the potential of the new weapon. The tests were progressing quite successfully, but in the summer of 1944, when it became clear that the combat bats could be used no earlier than the summer of 1945, the project command was closed. Preference was given to the atomic bomb, work on which moved much faster.

Army tests were completed on 29 on May 1943 of Captain Carr (Carr) in a test report wrote: “The bats used in the experiment weighed an average of 9 grams. They carried 11 grams without any problems, the 18 gram bomb was carried satisfactorily, but the weight in 22 grams was beyond their power. ”

In subsequent experiments, about 6000 mice were involved. It became clear to the military that a new parachute is needed, which will print out a container-canister with a time delay, new mounts for ignition bombs, a simplified igniter, etc.

Captain Carr, in a secret message from 8 on June 1943, briefly reported: "After most of the test material was destroyed by fire, the tests were completed." To test the effectiveness of the device in the desert, a typical Japanese village was built, to which bats were lowered with bombs. The captain did not mention that during the tests, due to the negligence of the staff, the door remained open, and some animals escaped with real incendiary bombs. As a result, the hangar and car of the general were burned.

Nothing is known about the reaction of the military leader, but shortly after the incident, in August 1943, the project was transferred the fleet, which for some reason gave it the name Project X-Ray ("X-rays"). In October 1943, the Marines began guarding four caves. This was done in order to capture bats if necessary - up to a million individuals could be caught in one night.

Full-scale trials have been scheduled for August 1944. However, when Admiral Ernest King realized that bats would not be ready for battle before the middle of the 1945 of the year, he stopped working on the project. By this time about 2 million dollars had already been spent.

Dentist surgeon Adams, who until recently worked on X-rays, was very upset. According to him, the arsons committed by bomber bats might have brought more damage than the atomic bombs dropped on Hiroshima and Nagasaki.