Germany calls for a peaceful solution to the conflict in Libya 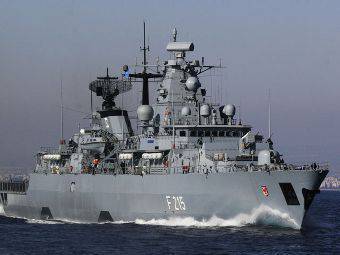 The German leadership said it was withdrawing its ships that are in the Mediterranean from NATO's submission. Two submarines and two frigates, and 550 military personnel on board, temporarily subordinated to the German command.

Such a move by Germany means that it will not directly take part in NATO operations in the Mediterranean. As previously reported, the Navy of the NATO member countries fully assumed the entire responsibility for securing the embargo on supplies weapons in Libya. This embargo does not exclude a complete naval blockade.

A spokesman for the German Ministry of Defense, commenting on the decision of the German authorities, noted that since such an embargo provides for armed intervention if necessary, Germany refuses to take part in this.

Now it is not known whether German submarines and ships will remain in the Mediterranean or be withdrawn. Recall that Germany during the adoption of the UN Security Council resolution, which established the unmanned zone over Libya, and does not exclude the possibility of causing air strikes against the forces of Muammur Gaddafi - abstained.

At the same time, Angela Merkel herself said that such a position of the German government does not mean neutrality. Recall that in March 23, the German government decided to send 300 troops to Afghanistan to ensure the safety of the reconnaissance aircraft of NATO AWACS troops. Recall that last fall due to the growing political debate on the issue of Afghanistan, the German leadership decided to terminate its participation in Afghanistan. Now we see that the position of Germany has changed dramatically. By replacing their NATO allies in Afghanistan, HermannNXX will thereby enable Great Britain and the United States to use their forces in Libya on a larger scale. This step of the German government cannot be called friendly for Muammur Gaddafi and his supporters.

According to one of the German agencies, the Vice-Chancellor of Germany and the head of the Ministry of Foreign Affairs, Guido Westerwelle, believes that the conflict in Libya must be resolved by political means. According to him, everyone should understand that it is impossible to achieve a solution to the Libyan question only by military means. He also sharply criticized the words of French President Nicolas Sarkozy.

Recall that in his recent speech, French President Nicolas Sarkozy warned the entire Arab world that in the case of repression against its own population, the reaction of Europe and the entire international community would be exactly the same as in the case of Libya. The French president also noted that each of the state leaders, and this primarily concerns the leaders of Arab states, must know that the international community will always stand on the side of the people, who hold peaceful demonstrations and defend their rights.

Even the head of the Ministry of Foreign Affairs of Germany, Guido Westerwelle, stressed that such a discussion is very dangerous and can have dire consequences not only in the Middle East region, but also in the entire Arab world as a whole.