January 30 2014
13
In October of this year, two 70-meter balloons will appear in the sky of the American state of Maryland. They will be at an altitude of about 3 kilometers and monitor the environment. Special equipment installed on these balloons will collect information for air defense systems. For some time, new balloons of the JLENS complex will be tested in real conditions and monitor the situation in the airspace of the eastern United States. 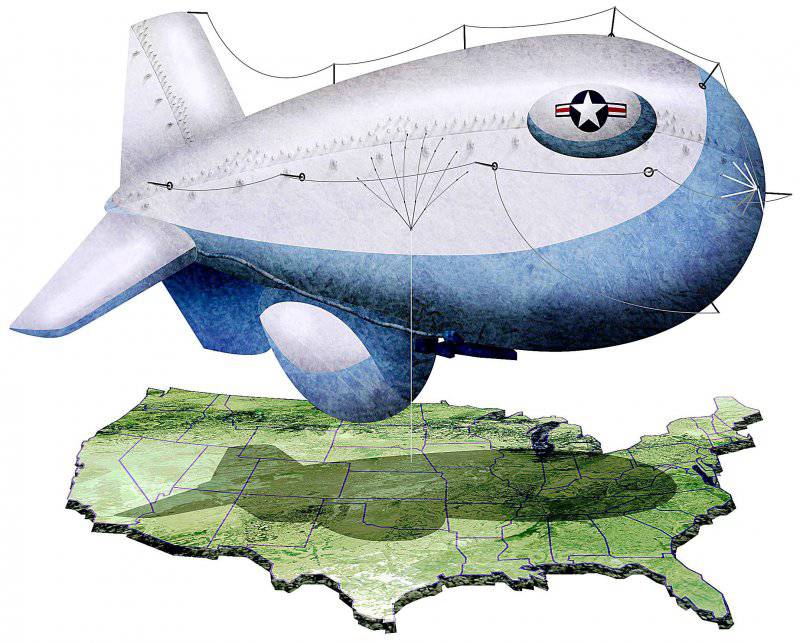 The JLENS complex (Joint Land Attack Cruise Missile Defense Elevated Netted Sensor System - “The Unified Network System for the Detection of Cruise Missiles”) is a development by Raytheon. Work on the creation of the airship with a complex of electronic equipment and ground-based facilities lasted almost two decades. The goal of the JLENS project was to create a flying radar station based on an aerostat capable of staying in the air for a long time and watching the surrounding space. Using a balloon as a basis for the complex allows you to raise the radar antenna to a relatively large height and thereby increase the radius of target detection in comparison with similar ground-based radars.

Balloons about 74 meters long and weighing several tons will hang on a leash at the Aberdeen Proving Ground. The equipment placed on them will allow to monitor various objects in the air, on the ground and on the water. It is known that radars installed on balloons will be able to detect air targets at a distance of up to 550 kilometers, and for ground objects (cars or other vehicles) the maximum detection range will be at the level of 225 km. Thus, only a few balloons of the JLENS complex will be able to create a solid detection field on the east or west coast of the United States. Also, the balloons will be equipped with video cameras, which allow monitoring in a radius of several tens of kilometers.

It is known that aerostats with radar stations will not only be able to detect targets, but also direct anti-aircraft missiles at them. It is assumed that at the same time in the air there will be an aerostat with a radar designed for observation and search for targets, as well as an aerostat with a station for target illumination and missile control. Due to this, it is expected that it will be possible to increase the effectiveness of joint combat operations of the JLENS system and anti-aircraft missile systems, which ultimately will affect the capabilities of the entire US air defense.

According to reports, the JLENS complex will include several technical means. These are directly balloons with radar monitoring and control stations. weapons, mobile installation with means of deploying balloons and ensuring their operation, as well as machines with electronic equipment and calculation work stations. To keep the balloon in position it is proposed to use the cable of the original design. This element of the complex combines power and fiber optic cables for data transmission, covered with a strong Kevlar braid. Such a cable allows the balloon to rise to a height of the order of 4,5 kilometers, while simultaneously providing electricity to all systems and transmitting data on the situation in the air and on the ground. If necessary, the balloon complex JLENS will be able to transmit information via a secure radio channel.

As part of the air defense systems, the JLENS complex in the future will perform the same functions as the existing radar stations. The calculation of the complex will monitor the airspace or, if necessary, the movement of ground vehicles. When a potentially dangerous target is detected, the calculation will have to transmit information about it to the appropriate information management center through the available communication channels. Further, the operators of the JLENS complex will be able to help their colleagues from the calculations of the air defense missile system, highlighting the attacked target.

In the future, the complex JLENS can get weapons for self-attack of some targets. Raytheon is developing the SDB II compact bomb, which is expected to allow the calculation of the JLENS complex to destroy some types of ground targets without resorting to outside help. Guided bomb caliber no more than 100 kg will be able to hit targets at ranges up to 60-70 kilometers from the balloon dropped it. The dimensions and weight of this bomb make it possible to use a combined homing head on it, combining passive radar, passive laser and infrared systems.

According to Raytheon, in its current form, the JLENS complex has greater efficiency than existing long-range radar detection aircraft. One JLENS complex will be able to monitor airspace around the clock for 30 days. To accomplish such a task by forces aviation will have to put on duty 4-5 aircraft. In addition, the use of balloons with radar stations is 5-7 times cheaper than the operation of several aircraft with similar characteristics, and also requires half the number of staff.

The financial side of the JLENS project is currently being criticized. The promised savings in operation or maintenance will manifest only after the complex has been put into service, but this event will take place only after a few years. Meanwhile, about 4,1 billion dollars has already been spent on the development of balloons, radio-electronic equipment and other components of the complex.

As if trying to reassure taxpayers, representatives of the Pentagon recently announced an approximate schedule of further work on the project. So, October 1 will begin a new phase of testing a promising complex. Balloons JLENS placed on the Aberdeen Proving Ground. It is assumed that these tests will continue to 2017 year. For three years, Raytheon and the military intend to correct the remaining shortcomings and bring the promising complex to a state suitable for use by the troops.

Previously published information on the course of testing of the JLENS complex suggests that it has high potential. In early August last year, the Pentagon and Raytheon reported the completion of the next test phase, during which the advanced radar complex coped with all the tasks. During the tests, the balloon with the radar station successfully detected unmanned aerial vehicles, cruise and ballistic missiles. In addition, as part of the test complex JLENS for a long time tracked the movement of the vehicle. With the help of a video system installed on a balloon, testers were able to detect saboteurs of a conditional enemy and record how they installed a training explosive device on one of the roads in their area of ​​responsibility.

The declared characteristics and capabilities of the JLENS complex look interesting and promising. Having received such surveillance systems, the US military will be able to significantly increase the potential of its air defense. However, despite the declared use of the complex, some fears have reappeared in the American press. There are suspicions that balloon balloons with radar stations and video systems will be used not only and not so much to monitor the air situation and protect the airspace of the United States, but rather to monitor their own citizens and interfere with their privacy. After the recent scandals, such fears do not look unfounded or far-fetched.

The military, in turn, calm the agitated public with assurances about the use of JLENS complexes only in the interests of the country's security. In addition, they emphasize that they are not going to transfer the collected information to any special services. Such statements could completely dispel all suspicions, but the Pentagon did not give any guarantees of the preservation of these plans. Therefore, the unrest and suspicions associated with the JLENS complexes will not only not cease in the near future, but will continue with a new force after the start of the next test phase.

While the press has been spreading rumors about the possible use of the JLENS complex for spying on its own population, the military and Raytheon continue to prepare for the conduct of new tests. At the moment, the test is scheduled to begin on October 1, although for the remaining time this date may change. One way or another, the Pentagon does not intend to abandon a promising surveillance system that will help increase the capabilities of air defense.