Lukashenko’s distance lessons for Yanukovych, or what if there was a “father” in Kiev today?

January 30 2014
188
The Ukrainian topic has recently captured the mainstream media, not only Ukrainian, but also the media in many other countries. One of the topics for discussion is as follows: the situation with the “Maidan” could have gone as far as what it reached in Ukraine, if the situation was in Russia or, for example, in Belarus. In this material it will be quite possible to speculate on the Belarusian course of events if, God forbid, the “Maidan” began to form not in Kiev, but in Minsk, as to speculate about the reasons for the “softness” of the Ukrainian authorities. 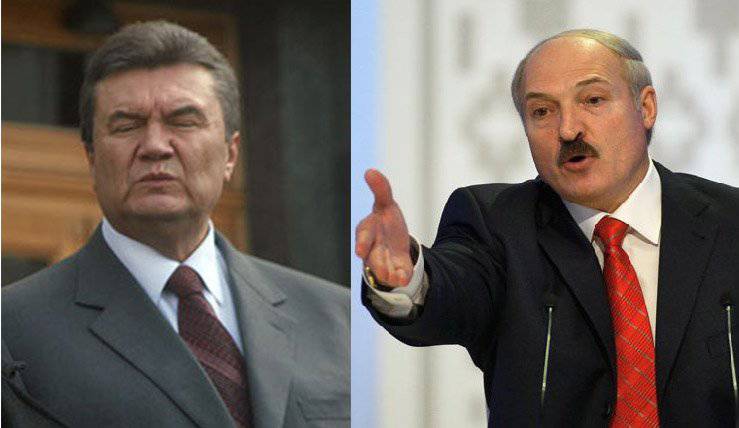 To begin with, it is worthwhile to present a quote made about the Ukrainian events by the President of Belarus Alexander Lukashenko. In the quotation, there is enough “pepper”, which quite obviously makes it clear what position the Belarusian leader has managed to determine for himself.
Alexander Lukashenko quotes the edition "Belarusian Partisan" (how can you trust the accuracy of quotes on this resource? - another question):
What is happening in Ukraine is a nightmare, it is a disaster. This is not my business, they will figure it out without me, ask me - I will say yes or no, whether I will help or not. If they take power in this presidential election, those who are trashed are for a long time.

Here the words that the President of Belarus is reflecting on possible assistance to Ukraine stand out in particular. In fact, it is very interesting, but what can really happen (although the probability of such a confluence of circumstances is close to zero), if, for example, Viktor Yanukovych asks for neighborly help? Interesting is the nature of its provision from Belarus. If such assistance is presented today in a forceful manner, then you can imagine the tonality of the screech, excuse me, "maydanutyh" gentlemen, well, or, using the analogy that was once used by Vladimir Putin (which is well combined with the Ukrainian reality today) - BANDERLOGS. Naturally, for the fascist opposition of Ukraine, any forceful intervention by Belarus or Russia is a grandiose reason to appeal to the West in order to "help" is already more substantive. It is to be expected that in this case Ukraine may slide into the abyss of the most real (let's say, hot) war with all that it implies.

But we will not escalate, since it is difficult to suspect Alexander Lukashenko of such an obvious political short-sightedness, in which the Belarusian security forces could openly go on the suppression of the “maydanutyh”. The key word here, by the way, is “open” ... The open script today is like death for Ukraine, but why open. If in the “half-closed” mode there are Western emissaries, then a similar “half-closed” counterweight is needed. In this case, the hypothetical help from the same Lukashenko, most likely, fits into a balanced information campaign and a number of preventive steps of a different nature.

First, about the Belarusian information campaign, which today has already received critical arrows from the West, which means it really works for the benefit of the unity of Ukraine. Polish edition Gazeta Wyborcza He is indignant about the fact that in the Belarusian mass media people who are abundantly represented, for example, on Grushevskogo Street, are called exclusively by radicals, criminals and militants, and not “fighters for freedom and democracy”. “Concerned” by Gazeta Wyborcza and the fact that in Belarus “they do not disclose the subject of” protests. They say that there is little “correct” from the point of view of a “democratic” publication, information. Well, and in order to explain to its readers why information about “Maidan” in the media of Belarus is presented in this way, the same Polish GW summarizes: “Lukashenko is afraid of Maidan, as a vampire of holy water". Well, quite in the spirit of the “democratic” media, isn’t it ... Surprisingly, the “facts” of how Lukashenka “drinks blood straight from the Democrats' bitten throat” are not yet presented ...

Now something about the preventive actions of the Belarusian president. As you know, during a mass rally in Ukraine, a Belarusian citizen died, who was a member of one of the most radical extremist organizations. The Ukrainian funeral of this man resembled footage of the fascist sabbath: a string of people with masks on their faces, in forged boots, clutching at each other’s shoulders, accompany the “brother” on the final journey ... After that, the Belarusian secret services began to work more actively towards those who are organized groups are sent to Ukraine with very vague intentions. The Belarusian opposition immediately accused Lukashenko of violating the human right to freedom of movement - as they say, the thief and the cap are on fire ...

Only all of these and other similar accusations, Lukashenka does not intend to comment, and certainly does not intend to bend before such demands, as they say. But the neighbor - Victor Fyodorovich - very much bends ... It seems that Victor Fyodorovich is ready to fulfill any vagaries of those who are now seeking to cut Ukraine into pieces.
Afraid of sanctions? Well, what kind of sanctions could be worse for Ukraine, what the country was turned into today ... There is another version of events: the actual inaction of the head of the Ukrainian state, the reluctance to solve the issue in an effective way of force - the way it would be solved in the UK, USA, Germany how the same Lukashenko would solve it - is connected with banal utilitarian reasons. What kind

Ukrainian economic experts and political scientists say that the state of emergency in Ukraine is not introduced only because if introduced by law, all assets of private banks must be transferred to the NBU (National Bank of Ukraine) for the duration of the emergency — that is, actual nationalization will take place . If so, then it becomes quite understandable, let's call it, the soft motivation of the Ukrainian political elites, which today are "directed in their work" by two opposing oligarchic groups.

On this occasion, it is worthwhile to submit another quotation by Alexander Lukashenko:
A beautiful country with a beautiful people, and this mess with the so-called market, where the clans divided the country - this is what this leads to.

If, in the event of a state of emergency, nationalization of all bank assets without exception is the reality of Ukrainian laws, then it is quite obvious that the oligarchic clans of Ukraine do not have a state of emergency in any way ... Who wants to take and part with their “honestly earned Tugriks "... This indirectly explains the indecisiveness of Viktor Yanukovych, who, apparently, is not able to independently make a single decision.

If it were in Minsk, then all the “maydanutymi” would definitely give a couple of hours to “go home”, then “those who remained in the name of democracy” would be taken into a tight ring, isolated from him instigators and especially violent, giving free rein to the police special forces and its effective special means. Well, the "analogues" of Yatsenyuk, Tyagnibok and Klitschko for the attempted coup d'état would have tried the prison balanda already at the initial stage of "protest." The courts would be fast, the sentences are hardly acquittals ... The leaders of the western regions of the country, as well as the heads of law enforcement agencies who hand over administration buildings suspiciously calmly, would quickly pass through the “aptitude test” test. “Professionally unfit” would then find work, for example, on clearing space from debris and other “barricades” ...

Would they have walked around the central square of Minsk Nuland or Ashton, trying to feed law enforcement officers with rolls and patting “Protestants” on the shoulder? - well, it is unlikely ...

For this, he "loves" Alexander Lukashenko and the West, and the quiet-quiet Belarusian opposition ... For about the same, the "democrats" confess "in love" to Vladimir Putin ...

Ctrl Enter
Noticed oshЫbku Highlight text and press. Ctrl + Enter
We are
Belarusian nationalism is a weapon of the West against RussiaResults of the week. “You can legally go. It is difficult to reach
Military Reviewin Yandex News
Military Reviewin Google News
188 comments
Information
Dear reader, to leave comments on the publication, you must sign in.