The war of words and the blockade environment of Ukrainian society 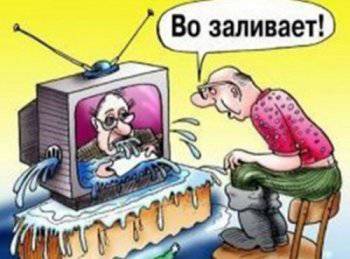 It was confirmed by what many not only guessed, but also spoke. Ukraine has a professional terrorist army, the backbone of which is well-trained attack aircraft of the conglomeration of the so-called "Right Sector", trained in combat operations in the city, owning the technology of forceful seizure of buildings and sensitive facilities. Information cover is provided by dozens of TV channels, including several state-wide, many hundreds of online publications, thousands of journalists, bloggers, and Internet hamsters - “black squares”. It was they who instilled in the public consciousness semantic stamps - “peaceful protesters”, “activists”, “they are children”, “outraged citizens”, “fighters for their rights” ... Officials of the EU and the United States unequivocally approve of the actions of the PS, being like us we see, an ally, inspirer and sponsor of the monstrous attack that was undertaken against Ukraine’s traditional. Victoria Nuland admitted that America invested 5 billion dollars in the development of “Ukrainian democracy”. Which part of these funds was invested in political technologies, training and “independent” media, which in lawmaking, and which in the creation of summer camps, training for militants , the Molotov cocktail throwers, did not say so.

The fiery phase of Maidan, an attempt to capture the strategic Ministry of Energy by armed people, talk about the threat of the Rovno nuclear power plant and the mining of the Dnieper hydroelectric station, the seizure and defeat of the TV channel "Kiev" peaceful supporters of European integration. " The persons involved in these excesses, anyone, but not "spontaneous activists of the Maidan." We must speak the truth - they are attack aircraft, thugs, professional militants and provocateurs who can attack without weapons“Gaining weapons in battle”, in their ranks “reckless scumbags”, they are a highly accurate tool of big politics. Other terms a la "onizdeti" - camouflage, front camouflage net over the true meaning.

The fact that the actions of the "activists" are technological and in no way spontaneous, says a lot of facts. A tiny example. An observer of the two-hour assault on the RSA building in Cherkasy testifies: “Periodically, those who fell into the water [from the number of attack aircraft] quickly disappeared in the aisle between the Communication House and the neighboring 5-storey building. After some time, they returned, while their wet outerwear magically became dry - and again to the assault. ” The quartermaster service on their terrorist front acts flawlessly. And another thing: in many cities they noticed that there are always people in red jackets in the crowd of “revolutionaries”, these are commanders of units, “conductors”, they transfer teams, all other attackers keep them in sight and listen to them implicitly.

Similar we see in the media. There is no need to go far for an example. The first available message, pulled out of a stream of similar, about the events of the fiery night of January 19 / 20 - is a witness. Pay attention in the news report to the terms: “As of 02: 00 ul. Grushevskogo continues to remain the center of confrontation between the protesters and law enforcement officers ... Military trucks for passenger traffic and two buses burned down. Activists also continue to throw water cannons at the incendiary bottles, but the security forces are still able to put them out. Some bottles fall directly into the soldiers of the internal troops, which is why they light up ... ”The reader of such texts, according to the plan of technologists, should not move the hair on his head, but on the contrary - a feeling of pride and excitement for the actions of protesters and activists should flare up.

War against Yugoslav-Libyan-Syrian stencils started against Ukraine. About the deep purpose of the sponsors of the war, we will say later. In the meantime, we note that the fiery phase did not begin with the adoption of "dictatorial laws", as it might seem to someone. But with the verdict, which handed down to three terrorists Svyatoshinsky district court of Kiev 10 January. That same evening, an attack was made on the Berkut cars. Forwards had the intention to repel convicts, to show that they did not abandon their own. Three terrorists, who are trained by the press, disguising the essence, for several years now call them “Vasilkovsky terrorists” - these are members of the ultra-nationalist organization “Patriots of Ukraine”, which is one of the militant detachments of VO Svoboda, an integral part of the Right Sector. These guys, who lived in Vasilkov, made a bomb filled with nails and set out to blow up a monument to Lenin in Brovary during a crowded holiday. Intentions were suppressed, the trial lasted a long time (IN "Freedom" obstructed), the verdict was 6 for everyone. Let's pay attention: the epithet “Vasilkovskys” is a flair, designed to give the word “terrorists” a kind of frivolity, almost no humor.

By January 19, by the time of the next “veche” on the Maidan, the militants prepared themselves thoroughly. It was at this point that the media were suddenly filled with reports that "this week the Svyatoshynsky district court of Kiev issued a verdict in the case of Vasilkovsky terrorists". Although in fact the verdict was not “on this”, but last week. It was a signal. At the same time, the January 10 riots were not mentioned. There (already the reason was forgotten) the fighter for the freedom of terrorists Y. Lutsenko suffered a head injury. Spread the old "news", Apparently, was a signal to the fiery uprising, like the legendary" cloudless sky over all of Spain. " Well, the adoption by Rada of 16 of January of raw laws, tailored to European patterns, was used by political spinologists of Maidan to the highest degree. The media did everything so that these laws, called “dictatorial” (and among them the necessary law banning the propaganda of fascism and some others), overshadowed the actions of the defenders of the January terrorists 10.

Ukrainian society has been living in an information blockade environment for several months now. When gosdepovsky “5 channel”, nominally belonging to the “chocolate presidential candidate P. Poroshenko”, led pro-Western propaganda from year to year, warming up nationalist passions, it was perceived as the action of a propaganda sabotage army. But one. The struggle with it due to reality was almost never conducted, but if conducted, it was sluggish. 5 had its influence on the exacerbation of the political situation in 2004, during the first Orange Revolution, zombies with the biased “honest novae” of the simple-minded Ukrainians.

Do not deviate from the topic, if we remember how Poroshenko masterfully trained his correspondents, making them pocket. What are the methods of training "free" and "honest" journalists? This can be judged by the printout of Poroshenko’s conversation with Vladislav Lyasovsky, editor-in-chief of the information service of the 2003 channel, published in 5 during the year. Poroshenko at that time was the people's deputy from the party of Yushchenko in the Verkhovna Rada and was concerned about his progress. Poroshenko in the conversation inserts a piston to his editor: “I once again looked at the channel. Of course, I am “very pleased” that we have Pogrebinsky on the channel. I am “pleased” with the fact that in this way we have it illuminated that we have Donetsk against Yushchenko. My friends, the situation on the channel is simply uncontrollable. I am telling you this. The information block on the channel for which you are personally responsible, personally you ... "Lyasovsky justifies:" I will ask you, let's clean up the hell out of people who are asterisks, then I will answer. "

Speech about self-minded journalists. Poroshenko allows: “Take away ... Please, you answer personally, and you can at any time make proposals on the removal of" stars "and other x ..."

Actively hostile, pro-Western was this one channel. But at the beginning of the second Orange Revolution 30 in November 2013, Ukraine found itself in a complete information environment, where on all state-owned TV channels they began to drive into sympathy for “euromaidan”. The situation only partly changed after the signing of the new Moscow agreements, when Lyovochkin was removed from management, and the co-owner of Inter Firtash received a significant discount on gas for their enterprises.

However, the “1 + 1” Kolomoisky-Lauder remained, as before, sharply “maidanut”. Therefore, at present, the people of Ukraine are, figuratively speaking, in the position of the 6th and 12th Soviet armies of 1941, surrounded tank Guderian wedges. It was the latest technology, which at that time in the world no one could oppose anything. Our generals studied quickly. Using the same technology, they arranged for the Germans Stalingrad, Korsun, and Berlin at their time.

"5 channel" feels safe for now. As Maidan in general.

I would like to note that any political agreement with Maidan, which is “covered” by the West, is a trick of Maidan technologists, a maneuver, a regrouping of forces after any failures. So it was already this winter. To their recent failures, we can include the suppression of January 27 storming of buildings of the Regional State Administration in Cherkasy, Zaporizhia, Dnipropetrovsk.

The fact that the leaders of the Maidan suddenly, on January 27, began to dissociate themselves from Alexander Danilyuk's “Spilna sprava” radicals, is a small but obvious success.

Victory must be followed by victory. As Stalingrad followed Kursk, and then the Dnieper. So here ...

Of course, everyone needs a breather. Understanding, removing "weak links" and regrouping.

In the famous film by N. Mikhalkov, a hero on a snow-covered field near Moscow exclaims: “Does anyone know how to beat a German ?!” And he shoots from despair.

We are not in this position. Maybe the worst. But I just want to exclaim: to surround 5, you need political will to ban the propaganda of war and extremism ... Or is there already such a law? It seems, and the Constitution suggests this?

It is necessary to urgently address the issue of the dissection of information tank wedges "5-th" and "1 + 1" and masterful introduction in the media of its agenda. Otherwise, the Maidan, as it stands, will stand as a lump, only expanding - until the state is completely destroyed and the territory of Ukraine is transformed into a positional area of ​​NATO attack forces ...

Victory will be ours!