Not all summits are equally useful.

January 30 2014
145
The other day, perhaps the shortest Russia-EU summit has been held in the Belgian capital lately. Several previous summits of this type lasted for two days, often with a very rich "gastronomic" program - common lunches and dinners. This time they decided to keep within one day and in addition to abandon any “gastronomy”. It is a mystery which side has come up with such an initiative, but this is by no means the main topic for the discussion of the past summit. Less time allocated for its conduct allowed, let's say, to consolidate the agenda. True, here, too, you need to immediately make a reservation, since there was no separate agenda. The summit was held in a completely improvised mode and touched on both the interaction of Russia and the EU in a bilateral format and within the WTO, and the situation in Ukraine. 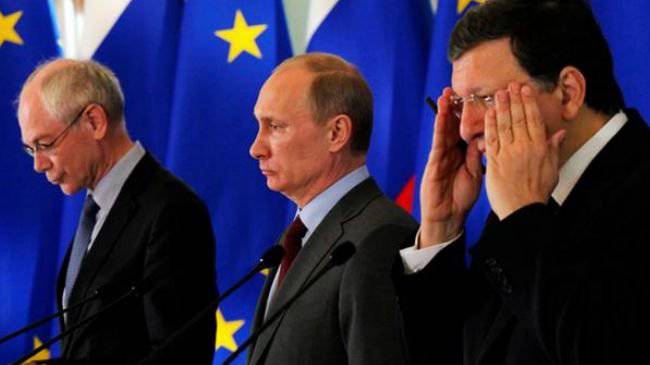 Discussing the economic contacts of the Russian Federation and the European Union, Vladimir Putin noted that, despite the not very favorable circumstances, he continued to increase commodity turnover. According to the Ministry of Economic Development, the trade turnover between Russia and Germany alone is about 100 billion dollars. For Germany, Russia is among the top seven import partners of the products and takes 11's place in exports. 5-6 years ago, the positions were 13-i and 17-i, respectively. The trade turnover between Russia and the Netherlands increased to 82-83 billion dollars by the end of the year. Russia is among the eight largest partners of the Netherlands, ahead of such economies as Japanese, Swedish, Norwegian, Spanish in this regard.

But, despite all the seeming goodness of Russian-European relations, the problems associated with these relations are above the roof. One of the problems is the peculiarity of the so-called Third EU energy package, in which two directives are specifically spelled out: “Electricity Directive 2009 / 72 / EC” and “Gas Directive 2009 / 73 / EC”. These directives were originally associated with a ban on mining and generating companies from owning controlling stakes in companies engaged in the transportation of electricity and gas. Over time, certain amendments were introduced into the directives, however, neither the directives initially, nor the directives after the amendments, are acceptable to the Russian side. The fact is that under the Third Energy Package, Europe has the right to ultimately withdraw from the contractual gas supply schemes, switching to a system of so-called spots. Gazprom has managed to calculate that this will hit the company and lead to a “dictate of conditions” in terms of gas prices from European consumers. Gazprom concerns, as it turned out, are identical to those of the Russian authorities, and therefore at the Brussels summit, Vladimir Putin reminded Barroso and van Rompuy that disagreements on the aforementioned Third Energy Package need to be overcome, how to overcome differences between Russia and the European Union and within the WTO.

Recall that today the European Union is very frankly “protecting” its market in order to prevent a significant increase in the volume of a number of Russian goods (from agricultural products to products of metallurgical plants). The motivation is that Russia has not yet "finally switched to WTO standards." Like, we in Brussels, Paris, Berlin have passed a long time ago, and therefore we defend ourselves from the "alien." However, at the same time, the EU is actively demanding that Russia actually fully open its markets to European products, reducing duties to the lowest possible values.

One of these requirements, by the way, will soon earn money in the near future: Russia, succumbing to WTO pressure, will have to remove the last barriers to importing genetically modified and transgenic products from the same Europe, and in addition will be allowed to grow transgenes on its territory. Instead of ordinary potatoes in the fields of the central zone, potatoes may appear, for example, with a cockroach gene. For what? So that the Colorado potato beetle does not eat. If such a potato becomes not to the taste of the Colorado potato beetle, then how suitable will it be for human consumption? .. To what changes in the human body can transgenic products, which will be eaten on a permanent basis, cannot be explained by any scientist. Someone claims that “cockroach-potatoes” and other fruits of genetic engineering of the new generation are perfectly safe for us, and someone says that such food can reformat the human genome itself (the second option, by the way, is confirmed by numerous studies on laboratory animals). In this regard, a joke in the style may well be relevant: today I couldn’t peel the potatoes - ran away from under the knife and dug back into the ground ...

Understanding the potential danger of the process (both economic and, let's say, medical), many Russian regions, taking the opportunity, adopted laws that today are called the term “Freedom from GMOs”. That is, in regions such as the Belgorod Region (plus 13 subjects of the Russian Federation), the cultivation of transgenic products in the fields will be strictly prohibited. But will de facto be banned? - This is a separate question.

Once again, Vladimir Putin raised the question of the prospects for creating a single economic (and, it should be especially noted, humanitarian) space on the Eurasian continent. The basis for work in such a space, according to the Russian president, could be the introduction of a free trade zone between the Eurasian Economic Union and the EU. To begin work in this direction, the Russian president suggested thinking about a quote “conjugation of European and Eurasian integration processes”, stating that there is no contradiction between such processes.

It should be noted that this is not the first summit, where words of creating a single integration space emanate from Vladimir Putin’s words, quote: “from Lisbon to the Pacific Ocean”. But the words of the Russian president clearly do not find much support from EU bosses. It is understandable. It’s hard to imagine that Barroso, van Rompuy or Baroness Ashton suddenly applaud Putin’s idea to “be friends with families” - to integrate into the EU-EES format. The same Ashton such “friendship” can only dream in a nightmarish dream, because the modern “humanitarian” interests of the EU are in no way matched with the humanitarian interests in the Customs Union, on the basis of which the EEC is formed. This can be traced by the example of Ukraine torn apart today. By the way, the aforementioned Mrs. Ashton (EU representative for international affairs) immediately after the shortened Russia-EU summit set the skis on Ukraine specifically for “mediation” in negotiations between the government and the opposition. Upon learning of this, Putin declared:

The more intermediaries, the more problems. I don’t know if Ukraine needs this mediation? .. I can imagine how our European partners would react if at the height of the crisis in Greece or Cyprus, at one of the anti-European rallies our Foreign Minister would appear and start there make some appeals. I think that the Ukrainian people are able to figure it out. In any case, Russia will never interfere in this.

But how could a baroness listen to these words, if her service today is to “attach” Ukraine, in whole or in part, to a “democratic” serpentarium. But who does Ashton and others mean today by the Ukrainian opposition? - those who, knowing that nothing depends on them, refuse to give Yanukovych a “gift” in the form of high posts, or those who have a head like a generator of Nazi slogans?

In general, the summit was held in a gallop mode - so soon that even no final documents were signed. But honestly! - why sign what today, it seems, no one is going to abide by ... Is there any benefit from such summits? Apparently, there is - like dark matter in outer space - only, by definition, it cannot be seen ... Benefit beyond the control of the consciousness of the average person ...

Ctrl Enter
Noticed oshЫbku Highlight text and press. Ctrl + Enter
We are
Results of the week. “Excuse me, aren't you crazy?” - “No. I have a certificate "WTO is marking time. Russia will push?
Military Reviewin Yandex News
Military Reviewin Google News
145 comments
Information
Dear reader, to leave comments on the publication, you must sign in.