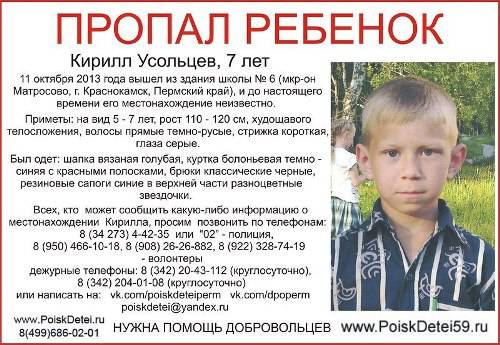 Hello forum users! I apologize in advance for the fact that the note does not fit the format of the site. This is a request for help. I cite the text of the appeal to all not indifferent on our website.
Attention! Lost a child! People, we beg, maximum repost !!! Help avoid the scary! Perhaps your repost or just like you will save a little life. We ask everyone to provide all possible assistance and to repost as much as possible throughout Russia the photo of Kirill Usoltsev and his parents' video message! Let's help parents find a son!
The boy announced in the federal search! Maybe he was taken to another region. God forbid that he was found faster! Help, do not pass by, be kinder !! For those who do not believe and think that this is spam, here are the links:
— http://youtu.be/tDPinEKoyAs;
— http://properm.ru/news/incident/70708/.
Krasnokamsk city. Day 11 October 2013, Kirill Usoltsev with a friend returned from school. At the intersection of the streets Matrosova and Red children parted. Cyril did not return home, he disappeared on the way home. In the evening, his parents went to the police. According to the press service of the regional State Ministry of Internal Affairs, first appeared the version that Cyril went to his friend. But as it turned out, the missing boy went towards his house near 12: 00. Until the child is found.
Not only the best detectives, cadets of the military school, soldiers, volunteers, policemen, but also divers joined the search for the seven-year-old Kirill Usoltsev, who disappeared in Krasnokamsk. Now search operations are conducted not only in Krasnokamsk, but also in Perm. Volunteers put up leaflets with orientations. “For the search for a child, several groups have been formed,” says Pavel Fadeev, head of the criminal investigation department of the Main Directorate of the Ministry of Internal Affairs for the Perm Territory. - The territory adjacent to the places where the boy could have been is divided into sectors and carefully examined. Work does not stop for a minute. "
On Sunday, October 13, information appeared that the child was allegedly seen in the regional center. According to the search volunteer Svetlana Nevolina, investigators suggested that Kirill could leave Krasnokamsk for Perm by car or public transport. As it was found out, the boy was brought up in a large religious family, in which there were no conflicts. According to the investigator for particularly important cases of the regional SU of the TFR Igor Denisov, the conditions of education in the Usoltsev family were good. Kirill grew up in a large religious family with six children. Usoltsevs live in a private house. According to the relatives of the missing, Cyril was on good terms with his brothers and sisters.
“On the day of the loss, he did not quarrel with anyone, he left home in a good mood,” says the father of the missing boy, Andrei Usoltsev. - We ourselves do not understand how he could disappear without a trace. On that day, October 11, he had only ten minutes to walk to the house. ”
The search party examined the dilapidated and emergency houses in the Matrosov neighborhood with the help of construction equipment, where, according to the investigators, the boy disappeared. And the Emergencies Ministry, police and volunteers investigated the local forest and swamps.
Anyone who has seen a child is asked to report him by phone: 8 (342) 249-54-55, 271-85-85 or 02. Signs: in appearance about seven years; height 110-120 cm; thin build; hair straight, dark blond; haircut is short; gray eyes. Special signs: the child speaks quickly, lisps. Cyril was wearing a blue knit hat, a bolonevy jacket with a hood of a dark blue color with a bright red lining, classic black pants. On the feet were rubber boots of blue color, in the upper part of which there are colored stars. I had a school backpack (satchel) of dark purple with black inserts.
For reliable information about the whereabouts of seven-year-old Kirill Usoltsev, a remuneration of 700 thousand rubles from the reserve fund of the governor of the Perm Territory was awarded.