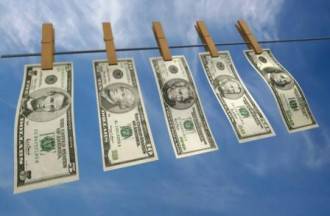 Since 1 January 2014, Russia has taken the chair of the G8 (G8), an international club that brings together the governments of Great Britain, Germany, Italy, Canada, Russia, the USA, France and Japan. The G8 member countries account for 50% of world GDP, 35% of world exports and 38% of imports. The 40 G8 summit will take place on 4-5 on June 2014 in Sochi. Russia proposed an agenda for the summit, in which the struggle against the international drug business is in the first place.


The laundering of dirty money is the basis of the drug trade union and banks.

The subject of the drug business is extremely extensive. Organized criminal groups involved in this business, as a rule, solve four main tasks:

a) ensuring the production, processing of drugs and bringing them to the wholesale distribution network;

b) organizing the sale of drugs through the wholesale and retail chains, bringing them to the final consumers and getting cash for the goods;

c) legalization of cash received, that is, their laundering by pumping into the banking system and becoming non-cash money;

d) the placement of money from bank accounts in various sectors of the legal economy, the completion of the "bleaching" of dirty money.

The activity of the drug business involves its close interaction with banks that take dirty money. Sometimes the drug mafia uses banks "in the dark", but this is usually for small amounts of cash injected into the banking system. With significant amounts and regular operations, the drug mafia directly negotiates with the bankers for long-term cooperation. During the last financial crisis, a unique picture was observed: the banks themselves began to search for exits to the drug mafia, to fight for attracting dirty money as a means of salvation from bankruptcy ...

The concepts of "dirty money" and "laundering"

The term money laundering was first used in the 80s. The twentieth century in the United States in relation to the income from the drug business and refers to the conversion of illegally obtained money into legal money. Many definitions of this concept have been proposed. The US Presidential Commission on Organized Crime in 1984 used the following wording: “Money laundering is the process by which existence, illicit origin or illegal use of income is hidden and then these revenues are disguised to appear to have a legal origin.”

In international law, a detailed definition of legalization (laundering) of proceeds from criminal activities and listing the types and methods of such legalization are contained in the UN Vienna Convention against Illicit Trafficking in Narcotic Drugs and Psychotropic Substances of December 19 1988, which had a great influence on the development of relevant legislation of Western countries . Vienna UN Convention 1988 recognized the laundering of money derived from drug trafficking as a crime, but the development of organized crime led to an increase in the income of criminal organizations obtained in other areas of criminal activity (slave trade, prostitution, trafficking in human organs, illegal trade weapons, extortion, secret placement of radioactive and other highly dangerous substances, etc.). Some of these revenues also began to be laundered and invested in the legal economy.

Council of Europe Convention No. 141 “On the laundering, detection, seizure and confiscation of the proceeds from criminal activity” of November 8 of 1990 recognized as a crime actions related to money laundering, derived not only from the drug business, but also from other types of criminal activity. Article 6 of the Convention defines the list of offenses related to money laundering. Differences in the legislation of individual countries are primarily associated with the definition of the list of acts that are the source of the legalized means. In the laws of some countries, the definition of dirty money includes all income, the receipt of which is accompanied by any violation of criminal law; in some, only income derived from serious criminal violations; in third countries, even income related to violations of civil and administrative law. In a number of countries, money received in the form of bribes (corruption) is also included in the category of dirty money.

The most comprehensive picture of the income of organized crime in the world is contained in the report of the United Nations Office on Drugs and Crime (UNODC) published at the end of 2011, which is entitled “Evaluation of illegal financial flows generated by drug trafficking and other organized crime” (1).

The total turnover of all types of criminal activity in the world in 2009, according to the report, was close to 2,1 trillion. dollars, which is equivalent to 3,6% of global GDP. The report contains an even narrower estimate, which includes the income of transnational organized crime. The report includes the international trade in drugs, counterfeit goods, people, human organs, rare species of animals, fish, plants and trees, works of art and objects of cultural heritage, and light weapons. Revenues that, according to the authors of the report, are mainly related to illegal activities within individual states, remained outside the scope of a narrow assessment. These are proceeds from fraud, robbery, blackmail, theft, racketeering, etc. The turnover of transnational criminal operations amounted, according to the report, to approximately 875 billion dollars, or 1,5% of world GDP. Among the types of transnational criminal activity, drug trafficking ranks first: according to the report, it accounted for at least half of all revenues, i.e. in absolute terms, almost 450 billion dollars, or 0,75% of world GDP. The drug business really should be attributed to organized crime with a high degree of internationalization of operations: more than 90 percent of the total “product” is consumed outside the countries that produce it.

However, other assessments of drug trafficking are also found in publications on the world drug business. The most conservative estimates - 400 billion dollars, the highest - 1,5 trillion. The figure for drug business income contained in the UNODC report should be considered as very conservative. If the UN report says that the drug business accounts for about ½ of all the revenues of organized crime in the world, other sources have higher values ​​- 70% and even higher (2).

Estimates of revenues from criminal activities in the United States, billions of dollars (3)

No other single type of criminal activity even comes close to the drug business, either in absolute amounts of income or in terms of profitability (rate of return). For example, the annual income from underground trafficking in the world, according to the US Federal Bureau of Investigation (FBI), in the middle of the last decade amounted to 9 billion dollars. According to estimates of the World Wildlife Fund, the volume of illegal trade in wild species of animals and plants in the middle of the last decade was equal to 6 billion dollars, and the rate of profit in this business was in second place after the drug business and ranged from 500 to 1000 percent.

What is the fate of money derived from criminal activity? Part of the dirty money remains in the “black” economy in the form of expenses for paying wages of workers in its sphere, for paying for “goods” (the same drugs grown by peasants), for purchasing weapons, etc. Dirty money at the same time can flow from one sector of the "black" economy to another. For example, the proceeds from the drug business can be invested in illegal arms trafficking, prostitution, human trafficking, etc. However, most of the dirty money goes on washing, which can be carried out both in the country where the money was received and outside it. The aforementioned UNODC report states that more than ¾ dirty money received from all types of criminal activity and 2 / 3 dirty money received from transnational criminal activity were washed.

There is nothing surprising in this: the amount of incomes of wholesalers can be measured in the millions and tens of millions of dollars, such money must be invested somewhere, and for investing you need clean money. The income of individual participants in the retail trade is one or two orders of magnitude less. A significant part of such income goes to personal consumption (if it is not very large purchases), part of them returns to the “black” economy. Retailers generally do not take a substantial part of their money out of the "black" economy, dirty money there is in constant circulation ..

The UNODC report provides some estimates related to the world cocaine business. Digit analysis shows that:

1) the overwhelming majority of drug use is outside the countries producing these drugs;

2) the vast majority of all profits from this type of business is formed outside these countries;

3) a substantial part of the money received from the drug business is laundered not in the countries of drug use, but outside of them.

According to the report, in 2009, retail sales of this type of drug amounted to 85 billion, while the gross profit of traders (wholesale and retail) was equal to 84 billion. (I.e., the direct costs of cocaine production were at around 1 billion.). At the same time, the bulk of gross profit was obtained in North America (35 billion dollars) and countries of Western and Central Europe (26 billion dollars). At the site of cocaine production (South America, including the Caribbean), gross profits of $ 3,5 billion were received, i.e. total 4 percent of total gross profit from the sale of this type of drug in the world

Ctrl Enter
Noticed oshЫbku Highlight text and press. Ctrl + Enter
We are
Way out of chaosBanks and bandits
Military Reviewin Yandex News
Military Reviewin Google News
16 comments
Information
Dear reader, to leave comments on the publication, you must sign in.