What awaits the Russians. The end of post-Soviet Ukraine 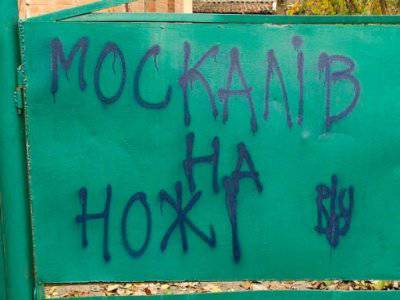 The anti-Russian revolution in Ukraine is increasing day by day. The process has already gone so far that it is clear to almost everyone: there is no return to the former post-Soviet Ukraine, which is unsteady, vague and constantly sweeping. The seam, which barely fastened two ethnocultural plates alien to each other, burst, dispersed throughout its length. And now, most likely, already completely. Even if it now succeeds for a short time to blunt the severity of the conflict, the country will still not return to its former state.


The footage of the barricades erected in the center of the city, the marching columns of the Bandera militants and the lively fighters of the “Berkut” awaken the darkest, most painful memories from the beginning of 90's in the Russian soul. More than twenty years ago, in many capitals of the Union republics of the then unified country, almost brutalized rioters from among the local chauvinist separatists, who were applauded not only by the West, but also by the entire Russian liberal intelligentsia (she applauds the rebel insurgents), also almost here. And the representatives of the authorities, that they were allied and local, were no less cowardly and treacherous than the President of Ukraine, Viktor Yanukovych, along with his team, behaved in these crucial days.

I didn’t want to remind what the Russian people expected on the outskirts of the suburbs that had fallen away from the Allied center after the victory of the radical nationalist forces. The Baltic apartheid turned out to be a relatively easy outcome for many of them. But the rage of radicals in Dushanbe, Grozny or Chisinau, which took place with the criminal acquiescence of the authorities in Moscow, led to real wars, ethnic cleansing and blood flow. Ethnoterror, which was once experienced by the inhabitants of those regions, in the near future now threatens the Russian and Russian-speaking residents of Ukraine. Honed Bandera trident brought over their heads.

Judging by the reports from the scene, the situation looks even more serious than many experts and political scientists estimate it. Here, for example, we are informed that right-wing militants seize the administration in the western regions and throw their heads out of the offices into the street, immediately starting to form their own authorities, recognizing not the Kiev government, but the self-appointed People’s Rada. This is a very important nuance! This is not a “color” revolution with its postmodern carnival antics anymore - it is a revolution in its traditional sense. This means that the rebels want to overthrow not just Yanukovych and his inner circle, but they want to demolish the entire system of power that has developed in Ukraine in the post-Soviet years. And rebuild your own instead. “Color” revolutionaries in their place would not force anyone to sign resignation statements, putting a knife to the throat, they would not be enough for a regional official to simply declare their support, “joined the insurgent people”. But today’s right radicals (and, most importantly, their foreign curators) this is not enough. They do not need to restart the “orange” program - they need a completely reorganized country.

The news that in Lviv, the militants began to openly create armed units - the so-called National Guard - did not cause much resonance in the Russian media. Sadly Apparently, for many years of domination in our political life of all sorts of imitations, frauds and imitations, a significant part of Russian society still does not perceive the rebellion in Ukraine as a serious threat not only to the Russians living there, but also to Russia itself. He thinks out of inertia that everything is happening there as if for fun, that “clans will fight and agree”.

Strongly doubt. The seizures of the regional centers, the creation of their own authorities and armed detachments - this is not at all a joke and they can’t make a fool of themselves just to scare Yanukovych. The actions of the rebels have long spoken for themselves. The ban of the Party of Regions and the Communist Party of Ukraine in the west of Ukraine is only the first step in a chain of real persecutions prepared by right-wing militants of the “Klyat Moskals”.

In such circumstances, a civil war between the raging West and still sluggish and reluctant to kick back the Southeast would not be the worst outcome. Exactly so, I am fully aware of my own words: a sharp confrontation and even armed conflict in such a situation is better than continuing the victorious march across Ukraine of the newly-minted “Center soldiers”. In a direct conflict, you can win or at least fight back, pushing Bandera as far as possible to the West. Such a direct clash will inevitably pose a crucial question for Russia, as if its government and president would not evade an answer to it under the pretext of the Sochi Olympics. Its outcome will be largely decisive for historical the fate of Donbass, New Russia and Crimea, the historical fate of our entire country. The victory promises the Russians reunification on both sides of the border, that is, the first step towards a further Russian irredent. And this is one of the most important strategic goals for us today.

The defeat of the Southeast in the Ukrainian confrontation (and even worse - surrender without resistance) paints us one darker picture than the other. The point is not even the loss of “geopolitical spheres of influence” (although they are important) - the point is the prospect of the largest defeat in Russia and the Russian world in the entire post-Soviet history (which exists over all Belovezh’s borders), fraught not only with a round of oppression of “moskalnennye” throughout Ukraine, but also ethnic cleansing and outright terror. Complacency in the Ukrainian question is completely inappropriate. The Serbs, during the days of the Olympic Games in Sarajevo, probably also did not assume that soon they would be expelled and massacre. However, what on the eve would have been perceived by the majority as the delirium of those obsessed with the persecution mania, a few years later became an eerie reality. Let today in Ukraine, all those who do not fall under the Bandera criteria of national and civil first-rate, think very seriously. And about how in such a case all the anti-Russian forces inside the Russian Federation will happily come to life, I don’t even say - just listen to the Echo of Moscow or read the next appeal of the Caucasian bandit underground to the Russian population. The war against the entire non-Bandera part of Ukraine has already begun, and today it has only one choice: to capitulate or accept the battle. The sooner she decides to fight back, the less will be losses and casualties.

But who exactly can stop the onslaught of the right-wing radicals?

Everything is clear with Viktor Yanukovych, who continues to nominally maintain the presidency. This actor cannot call forth any other feelings besides endless aversion.

With most of his entourage too. Prime Minister Mykola Azarov, of course, is not God knows what a fighter, but at least - the only person from among the top leaders of the country who directly called what was happening with a coup d'état - 28 resigned in January. And he could not help but present in such a situation, like any self-respecting politician. Indeed, in fact, the right to decide the fate of his closest comrade and second person in the country, Mr. Yanukovych frankly granted not the people's deputies from the Verkhovna Rada and not even acting as negotiators to the leaders of street crowds, but to the crowds from Grushevsky and Maidan. The cynical statements of Arseniy Yatsenyuk that his response to the presidential proposal will depend on the views of the Maidan, except as a mockery of the democratic procedures can not be called. In fact, he makes it clear that now the head of state and not even the deputies of the Verkhovna Rada (legal representatives of the people, by the way) are removing and appointing the government in Ukraine, but a few thousand who are not authorized area gorlopans and street pogromists. The media hostile to Russia and Russian Ukraine are falsely identified with all the people.

Are the heads of law enforcement agencies, heads of government in the South-East of the country and members of the Party of Regions really ready to come to grips with the Bandera rebels?

Obviously, the vast majority do not. The Minister of Defense himself withdrew, most of the heads of regions outside of Galicia mumble and wait, the regional party members are shy and scatter. It is impossible to believe that they suddenly gain the courage. The one who is really ready to fight in such a critical situation begins to do this immediately and with all his might, and does not come out with endless and empty admonitions. And is it not naive to expect from the thieving and endlessly cynical post-Soviet bureaucrats the will to resist? In contrast, the Bandera militants, as they do not belong to, have in their hearts genuine ideals (albeit infinitely hostile to us). Eastern Ukrainian “business executives” and managers are only personal commercial interest.

All this applies equally to representatives of the oligarchic groups of the East, who, through the mouth of the business structures controlled by billionaire Rinat Akhmetov, have already expressed their position - a non-resistance position and, on the whole, completely loyal to the rebels.

A certain optimism on the background of this celebration of stupidity, cowardice and defeatism cause only resolute statements of deputies of the Supreme Council of Crimea. It is doubly gratifying that the first cases have already followed them: volunteer people's guards came out to patrol the streets of Sevastopol, the activities of the right-wing Freedom party (the legal wing of the right-wing rebels) in the Crimean Republic were banned, few supporters of the Westerners publicly kicked their kicks. I want to believe that the determination of the inhabitants of the Crimea to prevent the Bandera sabbath on their land will grow stronger, and the Crimea itself will become a strong stronghold of the Russian forces, ready to fight, and will serve as an inspiring example for all unstable and vacillating.

Ctrl Enter
Noticed oshЫbku Highlight text and press. Ctrl + Enter
We are
About Stalin and KhrushchevWhat you didn't want to know about England
Military Reviewin Yandex News
Military Reviewin Google News
169 comments
Information
Dear reader, to leave comments on the publication, you must sign in.