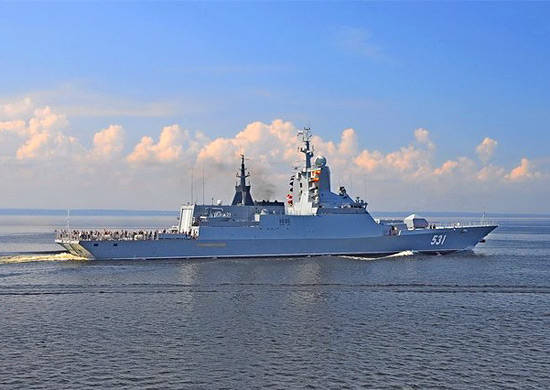 
United Shipbuilding Corporation (USC) ended 2013 year with a profit of more than 1,2 billion rubles. And this year, plans to make a profit already around 6 billion rubles.

Positive changes in the shipbuilding industry began last year: the Navy received new nuclear submarines and corvettes, export contracts were successfully fulfilled, construction of new-generation nuclear icebreakers began. Experts attribute this to the fact that the country's top officials paid particular attention to the shipbuilding industry. Suffice to say that the head of state last year held two meetings (in May in Sochi and in August in Vladivostok) on the development of shipbuilding, both military and civilian. Moreover, the president commissioned the supervision of the defense industry complex to the vice-premier of the Russian government, Dmitry Rogozin. Positive changes in the industry are the result of the direct participation of the vice-premier in the process of its restoration.

Under his leadership, it was possible to finally return to the old schedules of the program for the development of the submarine and surface fleets as part of the weapons program. As was noted at the end of last year during one of the government hours in the State Duma, the state cannot yet give up shipbuilding management in manual mode.

“The problem is that a very ambitious military shipbuilding program has been adopted in Russia,” said Dmitry Rogozin. - Today, Sevmash is simply overloaded with work. Not enough production capacity to realize all our plans. Therefore, I cannot say that we can release this situation from the manual mode.

The specialists do not need to explain what the phrase "Sevmash" means is overloaded: the newest nuclear submarines are being produced at this plant. Last year, the Russian Navy received the first production nuclear submarines of the 955 Borey project (Yury Dolgoruky and Alexander Nevsky). In addition, 30 December Sevmash put into trial operation "Severodvinsk" - the head of the eight multi-purpose submarines of the project 885M "Ash".

The Boreas are the first post-Soviet series of underwater missile cruisers to form the backbone of the underwater fleet strategic purpose, replacing the nuclear submarines of the Shark, Squid and Dolphin projects (Typhoon, Delta-3 and Delta-4 according to NATO classification). In total, by 2020 it is planned to build eight Boreevs. The third submarine of this series, Vladimir Monomakh, is preparing for factory acceptance tests.

Multipurpose nuclear submarines of the "Ash" series belong to the fourth generation of nuclear submarines of this type and have the original architecture. This also applies to the outer hull of the ship, and its internal layout. For the first time in the practice of domestic shipbuilding, torpedo tubes are not located in the prow of the ship, but behind the central post section, which made it possible to place the antenna of the new hydroacoustic complex in the nose. Due to the fact that the front part of the ship became “acoustic clean”, the search potential of the sonar complex significantly increased, providing the superiority in a duel situation that is crucial for ships of this class: “Ash” must “hear” the enemy ships before it is detected. According to experts, there are no such boats in the world, they have four types of weapons, they can shoot from any depth. A number of Western media have already dubbed the submarine "a beast from the depths" and have recognized Russia as the world leader in the submarine fleet. In general, only two countries in the world are capable of building nuclear submarine missile carriers with the latest weapons: Russia and the United States.

As part of the rearmament program of the Armed Forces of Russia, calculated up to 2020, surface ships are also being actively built. Last year, the Severnaya Verf transferred the Corvette “Boyky” of the 20380 project to the Navy. And in the Gulf of Finland are already being tested ships of the project "Resistant" in this series. Corvettes of this project are multipurpose combat surface ships for action in the near sea zone of the state. They can fight with surface ships and enemy submarines, support naval landing forces with rocket and artillery fire.

Last year, export contracts were also successfully fulfilled: the aircraft carrier Vikramaditya (former aircraft carrier cruiser Admiral Gorshkov, which was modernized at Sevmash) was handed over to the Indian fleet. India also received the last contract ship of the 11356 project: a multi-purpose frigate for the far sea zone. And the Vietnamese Navy adopted the first diesel-electric submarine "Hanoi" of the 06361 "Varshavyanka" project, built on the "Admiralty shipyards". Submarines of this project are considered the quietest of domestic ships. In total, Vietnam should receive six project submarines. In mid-January, the shipbuilding company transferred to Vietnam the second of the ordered submarines, and by the end of this year, it plans to deliver the third.

In the interests of the Russian navy this year a large program is also planned for the construction of surface ships and submarines, both nuclear and diesel.

An important event for 2013 of the year for the United Shipbuilding Corporation was the adoption of its development strategy for the period up to 2030 of the year. Vladimir Shmakov, president of USC, said at a meeting with the head of state in August last year, the strategy sets out the main vectors of the corporation’s development, determines the prospects of both military shipbuilding and civil shipbuilding, the transition to the divisional management structure and engineering development (from the territorial principle of managing to ).

According to experts, many of the problems of the shipbuilding industry are related to the fact that after the collapse of the Soviet Union there was a failure: the state did not allocate money for shipbuilding for more than 20 years. Only 2-3 a year ago began serious funding for the industry, money is allocated for the construction and repair of ships. However, many of the accumulated problems cannot be solved overnight. By and large, work on the revival of the industry is just beginning.

“Now the corporation is summing up the financial and corporate audit of the holding’s activities,” said Vladimir Shmakov at a meeting with the President. “Based on the preliminary results of this work, the key directions of the strategy were formulated. They take into account the new challenges facing our ships. This is a sharp increase in the volume of state defense order, the rapid growth of the pace of development of the oil and gas sector in connection with the beginning of the practical development of offshore areas and increased shipping across the North to the sea route. " The USC, together with the Ministry of Defense, audited all contracts signed by shipbuilders with the military department under the previous leadership (many miscalculations were made at that time). According to the leaders of the corporation, the work on the audit of all contracts will require a few more months, but the main thing is that the shipbuilders managed to find a common language with the current leadership of the military department. Now there is a search for the price range that will suit all parties.

According to USC, now the corporation, together with the Ministry of Defense, is working on pilot projects on a single life cycle of ships: shipbuilders will accompany the ship from the moment of design to its disposal. Indeed, according to experts, the cost of operating the ship during the life cycle may be twice the cost of construction, and this does not go away. Every 10 years it is necessary to carry out a complete modernization of the ship, it costs about 60 percent of the cost of the ship. Plus even scheduled repairs. And they need a modern infrastructure that needs to be created almost anew.

Improving the system of organizing and conducting a planned repair system for warships and submarines is one of the main areas of work. Currently, together with the Ministry of Defense, work is underway to re-create this system.

But most importantly, according to USC, Russian shipbuilders have not lost their competence over the difficult years for the industry. That is why now everything is not as bad as some skeptics sometimes try to present. And even have something to be proud of. For example, frigates ordered by India have an operating voltage ratio of 280 days. Where else can you see ships that go so long? According to experts, it was possible to preserve the potential of the design offices - and this is extremely important. By the way, the salary in them is higher than even in commercial organizations - this is an achievement. For example, in St. Petersburg, young engineers literally stand in a queue to get settled in the Rubin Central Design Bureau, where specialists receive more than the average in the city.

What can threaten the loss of competence, can be seen on the example of other countries. In France, for some time suspended the design of aircraft carriers, and then after a long break, they set about building the aircraft carrier Charles de Gaulle. The first tests revealed a lot of defects. As a result, the construction duration was 11 years, and the cost increased by 20 percent. When the aircraft carrier attempted to go to the first long-distance voyage, the end of the left-wing propeller blade broke off from a strong vibration, and the ship had to return to the port of registry. In England, also after a long break, they began building three aircraft carriers. Experts are already predicting a lot of problems due to the loss of competencies. In our case, the experience of modernizing Vikramaditya shows that Russia is capable of such tasks.

We pay a lot of attention to the construction of civilian ships. For example, in August last year, a government decree was signed on the construction of two nuclear icebreakers of a new generation, LC-60YA, to ensure the ship’s route along the Northern Sea Route. The lead icebreaker of the series was laid at the Baltic Shipyard in November last year.

“It is necessary now to deploy new civilian shipbuilding potential,” says Dmitry Rogozin, “to create new platforms, ships, marine equipment for the Arctic shelf and other large projects that our largest and private companies are interested in, and with state participation oil and gas companies. All this should be connected with the optimization of the deployment of production potential, so that after 2020, we would not be in a situation where we built a huge number of shipyards, and there is nothing to do with them.

The Deputy Prime Minister noted that civil shipbuilding is extremely important for balancing the distribution of the load on the production potential of USC, so as not to depend entirely on defense orders.

In general, the Russian shipbuilding industry faces a large-scale task: to become one of the leading countries in the construction of civilian vessels. Based on this, the USC strategy identifies the following as the most important tasks: ensuring the world level of quality and the timeframe for the creation of marine and river equipment; achievement of production volumes at the level of the top twenty of the largest shipbuilding companies; consolidation of the united shipbuilding corporation in the world market of high-tech marine equipment.

The USC leadership realizes that achieving such ambitious goals is impossible without optimizing the corporate management structure, strengthening vertical and horizontal cooperation ties, introducing modern and highly efficient forms of management, optimizing the production structure and getting rid of non-core assets, and pursuing a consistent personnel policy.

At the 21 meeting in Sochi on May 2013, USC President Vladimir Shmakov said: "All the tasks facing the United Construction Corporation are realistic and realizable. I am confident that the experience and developed competence of the team will help achieve the goals of the United Shipbuilding Corporation."