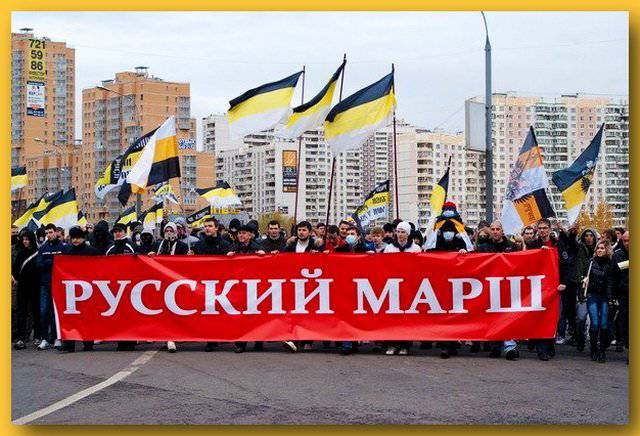 Everything was mixed up in the Oblonskys' house. For the sake of interest, I typed in the search engine the phrase: “The position of the Russian nationalists on the events in Ukraine!” And was shocked. Here is an excerpt from circulation in Ukraine:


"... White Christian nationalists should be in solidarity with other nationalists (Greek, French, Argentine or Ukrainian - it does not matter). We stand in a united front against the Marxist-liberal foundations. That is why the main nationalist organizations of Russia (RONS, NDP, EPO "Russian") support the protests in Ukraine. Ukrainian nationalists themselves do not set an end to joining the EU, it is only as a tactical maneuver to get out of the influence of the Kremlin. There is no longer that old conflict between the population of the Russian-speaking and Ukrainian. Now things are like this: Soviet-Putin zombies want to enslave Ukraine, which is taking the first steps towards freedom, opponents of Euromaid are afraid that the nationalists will arrange a similar uprising in Moscow ... ”

The full version of the quote is here: http://rusistka.livejournal.com/527http://158.html.

As for the part of the phrase, where to be in solidarity with the Ukrainian, here I am plagued by vague doubts. But more about that later.

In general, many support the "right sector" in Ukraine. In their dislike for Putin and the project of the Customs Union, they are even ready to sacrifice the Russian-speaking regions of Ukraine! The author of the lines above writes about Ukraine as a country taking its first steps towards freedom. But to freedom from whom? Lvov from Moscow or Lugansk - also from Moscow? I am also very interested in the opinion of the author, why he believes: "There is no longer that old conflict between the population of the Russian-speaking and Ukrainian"? As a resident and a citizen of Ukraine, and I am of Russian nationality, I agree with him only in part. But at the same time I want to ask him a question: why did this happen? Maybe someone deliberately from Russia ignores football movements in Eastern Ukraine and young people? Maybe because the Russians began to dissolve in the Ukrainians? Maybe because in the Russian-speaking schools of Ukraine there is no subject of Russian literature and stories Russia? And because of the fact that mathematics in Russian, you do not become Russian? Maybe because consumer culture contributes to liberalization? And in the end, maybe because almost 23 of the year has passed, how do we sit at different school desks and with a different media culture? In addition, now again the relationship between the Russian-speaking and "movnye" aggravated. And there has been a split among the Russian-speaking.

And the events of the last five days have shown that in the south-eastern regions of Ukraine, young people partially betrayed the older Russian-speaking generation. Especially fan football movements of purely Russian-speaking regions: FC Metalist (Kharkov), FC Metalurg (Zaporizhia), FC Dnipro (Dnipropetrovsk), FC Shakhtar (Donetsk). One can argue for a long time that there were also visitors from the western regions, and not all were in solidarity with the position of football ultras. But the fact is a fact! Middle and older people and veterans of Afghanistan with the Cossacks stopped the "Bandera" people. I quote from the story "We defended Zaporozhye":

12: 00 near the building of the Regional State Administration of Zaporozhye on the other side of Lenin Avenue, patriots gathered - people who came to defend their native land from the fascist scum. Visually gathered about 200 people of all ages. St. George ribbons were distributed to all, which became a symbol of resistance and raised morale to people, reminding us of the glorious feat of our ancestors in the 40s. Banderlogs with the flags of Fatherland, Blow, Svolota and simply with the Bandera black and red rag gathered directly around the building ...

... They started throwing trifles at us, as if by offering money. Apparently, the rates offered their own, thirty pieces of silver. Then chunks of ice flew at us. We broke the glass behind our backs. Thank God, the fragments did not hit anyone. After that, the jerks of the 14-16 years went ahead and started chanting: “Hero of glory!” The organizers of the riots hoped that this would provoke us to take any action, but they were mistaken. We simply shouted to this shantrapa with our slogans. Ultras, we generally confused, shouting "Metallurg" - the champion! "They shut up, not knowing what to say.

So, the older Russian-speaking generation of the city of Zaporozhye went against their Russian-speaking children of the city of Zaporozhye, who grew up on other values? The fact that the history books of Ukraine have done their job, we figured out a long time ago, that the elite of the south-east merged the “Russian world”, we also know that the official Kremlin did not notice the appearance of Russian-speaking Russian Russophobes in Ukraine, we also know . But I personally can not understand the attitude of unofficial Russia in the face of national currents to the fate of Russians in the south-east of Ukraine. I am not a supporter of Russian nationalism, I am a supporter of imperial nationalism, where Russians can be Tatar, Bashkir, and Belorussian, if they share the ideas of a united and great Russia and Russia. But since there are such trends in the Russian Federation that prioritize ethnicity, I am interested in their opinion on the de-Russification of 7-8 million Russians at the level of consciousness, and then the language? They don’t care, what kind of metamorphosis happens to guys in Ukraine, who have Russian names and surnames? Do they really not know that in Eastern Ukraine there are already cells of Russian-speaking Ukrainian nationalists who honor Stepan Bandera? Do they really not know that any Ukrainian nationalist is still different from their colleague of the Serbian nationalist, because he considers the Russian people to be a mixture of Tatars, Finno-Finns, Bashkirs, Mordovians, Mongols and anyone, but not part of the Slavic peoples and the Slavic family? All this is easily verified even in the Russian-speaking forums of Eastern Ukraine, when you call your interlocutor to unite with Russia, as with the fraternal Slavic people, but in response you hear only the mention that there are no Russians as such in Russia, because there are no Slavic tribes, the word “Russian” stole Muscovy under Peter I, having previously taken away this right from the lands of Kievan Rus and ON.

So I think, maybe they have concluded a secret agreement on the division of the sphere of influence with the Ukrainian nationalists, or they have one owner? But how can you refuse to cooperate and work in cities such as Odessa, Kharkov, Donetsk, Dnepropetrovsk and Krivoy Rog? Immediately plowed field to work. Even by the most conservative estimates, in Ukraine there are about 7 million ethnic Russians! I traditionally keep quiet about the Russian-speaking Ukrainians, who have accepted Russia with their heart and soul. Or is it for them not the Russian land? Where are their famous "Russian runs"? Is it really so difficult to organize cells or just to come? Do visas get in the way? Unlike official Moscow, their hands are not bound by protocols, agreements, etc. You can safely fight for the minds. But instead they admire Ukrainian nationalists, who are felting a monument to Lenin. And the fact that Bandera’s monuments will begin to be erected and in the future there will be a reduction in the use of the Russian language not only because of prohibitions, but also of seducing Ukrainian integral nationalism, do they not care? In different languages, we probably speak.

These paragraphs, authored by the leaders of the cells of the “Russian-speaking Ukrainian nationalists,” I dedicate to all Russian nationalists who sympathize with the Ukrainian pogromists:

And even though he believes that the Ukrainian nationalism of the south-east should be told in the language of the south-east, the current Russian-speaking is called the result of tragic events for Ukraine. Acknowledges that this is a negative and artificial phenomenon. Therefore, it notes that the native for the Russian-speaking Ukrainians do not care - Ukrainian:
"... After calling the Russian native, for some generation they will come across as the Russian people. And the Kremlin will say that" in Ukraine Russians are infringed. "What Russians when 45% of Russian-speaking residents of Ukraine 60% are Ukrainians? Ethnic Russians in Ukraine 10 years ago there were only 17%. The next census may testify that there are even fewer of them, ”the nationalist suggests, and warns that the current Ukrainian authorities are delaying the census in every possible way and at the same time preparing to falsify its results. honors the Russians than it actually is.
Therefore, the Russian-speaking patriots and nationalists Zamilyukhin calls a forced and temporary phenomenonm. According to his conviction, RUN - transition to a conscious and in the future - Ukrainian-speaking Ukraine.

Are you really ready to stand shoulder to shoulder with those who are storming the RSA in regional centers in their hatred of Putin? But what about Odessa, Donetsk, Kharkov and Sevastopol? They mean nothing to you? Did you deliberately leave a vacuum in Southeastern Ukraine, so that even Russian guys would be carried away by the Bandera movement and, in general, the Ukrainian direction of nationalism? You deliberately did not work with the football movement of south-eastern Ukraine?

Thus, dear friends and readers of “Military Review”, everything failed in Ukraine’s policy: the Russian-speaking elite of the south-east of Ukraine (thinking only about money and power), the Russians themselves living in Ukraine (considered Ukrainian culture to be an insignificant departure from their roots), the official Kremlin (thinks in the old manner that the east of Ukraine is asleep and sees itself from the Russian Federation) and the nationalists of Russia (they probably like the cut-down version of Russia, but they haven't heard anything about 1991 for a year). Or maybe just Russian nationalists believe that there are so many Russians on the planet that you can safely hand over several million Russians to Banderovites for re-education from the master's shoulder?

Ctrl Enter
Noticed oshЫbku Highlight text and press. Ctrl + Enter
We are
As NATO instructors in the territory of a military base in Estonia, trained Ukrainian nationalistsHow can Russia survive and win in the 21st century?
Military Reviewin Yandex News
Military Reviewin Google News
67 comments
Information
Dear reader, to leave comments on the publication, you must sign in.