Ukraine: what will be the Reichstag? 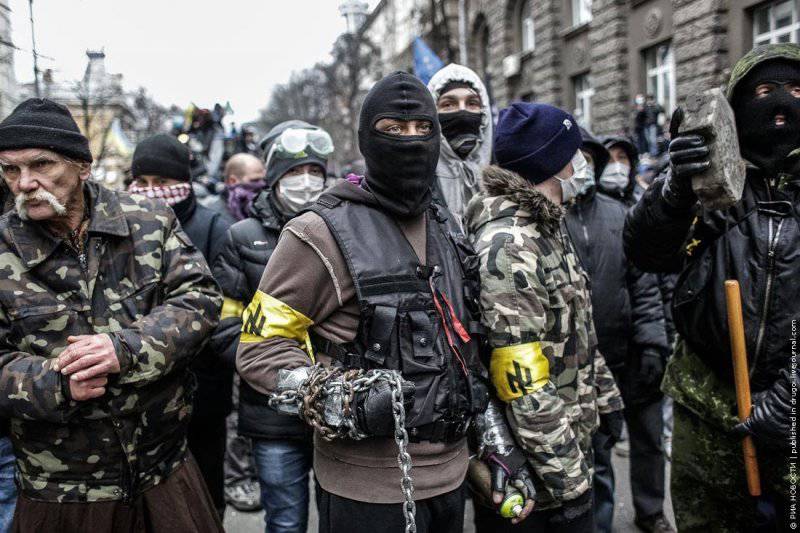 Yanukovych followed the path of Gorbachev and Milosevic. The authorities and the opposition “agree”, they have already agreed to cancel the anti-fascist package of laws from January 16. This is a “semi-capitulation,” said political analyst Sergei Markov. They will not be able to agree on anything constructive with all their desire, because the power on the Kiev street actually belongs to the Right Sector, that is, to the Bandera fascists. True, Klitschko and Yatsenyuk are already shouting a fascist greeting “Glory to Ukraine!”, But still for real Bandera they will remain underfascist, and they will not obey them.

This means that the crisis in Ukraine will grow for a very simple reason: Bandera storm troopers got their hands free, they practically legalized, despite the fact that they confessed to their January offensive and the killing of a policeman. And Yanukovych will rapidly lose the support of his electorate, that is, the population of a large Ukraine, because it sees: the government does not do what it should do by definition.

Yanukovych is unlikely to be able to get off the track, with the political support of the West, Bandera will give up, they have no problems with political will. By and large, it does not matter how he ends up: they will kill him in prison, like Milosevic in The Hague, or he will be lucky as Gorbachev. The politician "Yanukovych" is already moving away to a "better world." And in the real world, the struggle for Ukraine without Yanukovich will continue.

Prominent politician of the revolutionary situation V.I. Lenin (Ulyanov) said that in such periods stories it is important to define the “main link”. The main thing in evromaydannoy distemper is its fascist, Bandera link. It is replaced by various euphemisms like "activists", "protesters", and finally, the "radical" Right Sector. Because they are Euro-Fascists, fed by the West and nurtured by it; Western media and Western henchmen in Ukraine will no longer see “their own” fascists, and will continue to lie “with a blue eye” about “radical protesters.”

The fascists, during the seizure of power to create an atmosphere of hysteria in society and justify their violence, consciously go to large-scale provocations. There is a logic to this, the Machiavellian, which justified itself in Germany of the 30 of the last century: the burning of the Reichstag and the accusation of anti-fascists in this allowed the fascists to establish a complete dictatorship. The Bandera fascists do not hide the fact that they are following in the footsteps of their German predecessors, which means that they will somehow come to their Reichstag. And Western instructors will help them.

What could be such a "Reichstag" today, in specific Ukrainian conditions? Most likely, political murder, sacred, deafening. The most suitable candidates for this are Klitschko or Tyagnibok. Why? They are quite mediyny, but they are “impassable” in “democratic elections”, and Western leaders will still be uncomfortable sitting next to a former boxer and a real fascist.

Employees of the “Berkut” can be blamed for such a “crime of the century”. Actually, the Western media have already made gangsters of them, so that Western politicians will lament: this was to be expected, because we warned about the “Berkut” ... Other options are possible, as they say. I wish they did not exist at all, however, when dealing with the fascists, we must expect the worst.

Everything that happens in Ukraine has become possible because the West today, under the leadership of Washington, supports its Euro-Fascist Bandera in Ukraine, just as in the thirties of the last century, it supported Hitler, “pacified” him, using his politicians to the east. Today, Washington set out to use the Bandera fascists as a ram against Eastern Ukraine and, most importantly, Russia.

The West pursued a policy of "appeasing" the Nazis, until Hitler attacked them, only then in the West did they remember that he wrote "Mein Kampf" back in 1933. Since Bandera does not represent such a threat to the West, with regard to this Euro-fascism, it will be absolutely blind for a long time. And she will continue to demand appeasement of “peaceful demonstrators”, “protesters” with Molotov cocktails, although the giant portrait of Stepan Bandera in a state institution seized by the “protesters” resembles the portrait of Adolf Hitler ...

History never repeats literally, so the Bandera fascist history of the XXI century will have its own unique face. The main difference: modern Russia is much stronger than Stalin. Nuclear weapon deterrence, unlike Bandera, the West is difficult not to notice. In addition, the West is not so united in supporting fascism against Russia as it was in the twentieth century. Germany violates American discipline and advocates a trilateral, with the participation of Russia, the settlement of the crisis in Ukraine. Restrained by the UK. Interestingly silent is President Obama.

But US Vice President Joe Biden, yesterday's patron Saakashvili, declares himself as the informal patron of Bandera fascists. He unequivocally warned Yanukovych that "the United States will support Ukraine, which will refuse violence and will respect the human rights and dignity of its citizens who hope for a European future," that is, demanded free hand for Bandera, who for some reason are citizens of Europe the future.

Russians and Ukrainians, who still have to disentangle the porridge boiled on Euromaidan, we must not forget that the "nationalism" of the fascists is only a cover, a way to justify violence and outright robbery, of any crime. The more crimes, the louder the cry of fascist "nationalism". “Glory to Ukraine!” Everything is supposedly for the good of the people. But in fact, they expose their people. Yesterday - the German fascists, today - Bandera.