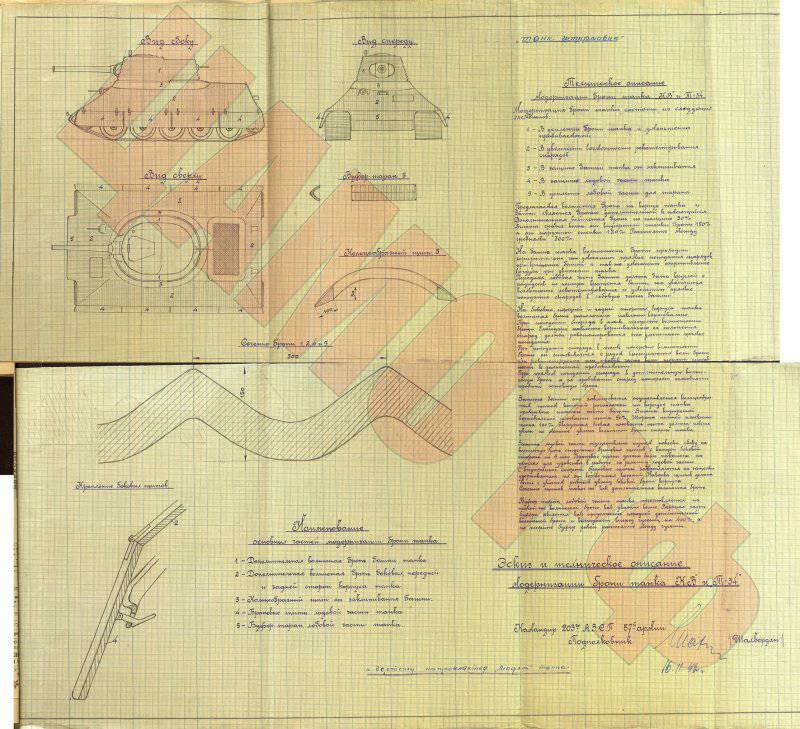 Screening project tanks "KV" and T-34, proposed in November 1942 by the commander of 203 gas stations of the 57th Army, Lieutenant Colonel Shakhverdyan.

The proposed wavy armor on the hull of the tank and the tower is optional and available. Additional wavy armor in thickness 30 mm. The height of the crest of the wave from the inner wall of the armor 150 mm, and from the outer wall 120 mm. The distance between the walls 300 mm.

Protection of the undercarriage is carried out by hanging on the side of the wavy armor of individual armor shields on each side of 4 pcs. Armor shields must be hinged for ease of maintenance on running gear repair. From the inside, the armor plates are fastened with latches, which prevent them from swinging. Hinged shields should be with a slope equal to the slope of the side armor of the hull. The cross section of the shields is the same as that of the additional wavy armor.

The buffer-ram of the frontal part of the tank is made of the same wavy armor, as indicated above. The upper part of the buffer is a continuation of the front additional wavy armor and protrudes the tracks forward on 400 mm, and the width of the buffer is equal to the distance between the tracks.
Ctrl Enter
Noticed oshЫbku Highlight text and press. Ctrl + Enter
We are
Additional protection for American armored vehiclesWunderwaffe for Pantservaffe. Description of the design of the tank "Mouse"
Military Reviewin Yandex News
Military Reviewin Google News
17 comments
Information
Dear reader, to leave comments on the publication, you must sign in.