United Europe is waiting for the parade of sovereignties 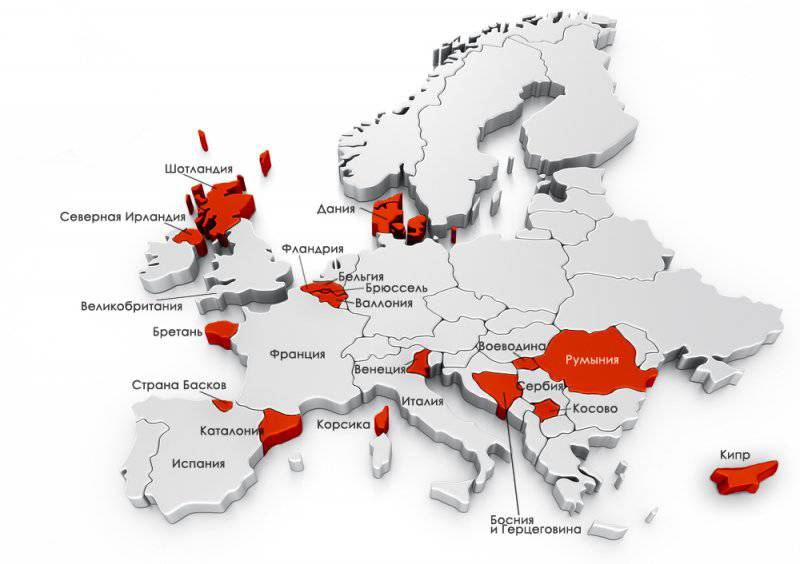 Modern Europe has faced a crisis not only social and economic: the Western countries are haunted by the specter of separatism. The world's most famous problems are Catalonia and the Basque Country in Spain, Brittany and Corsica in France, Scotland and Wales in the United Kingdom, and southern regions in Italy. In addition, in Eastern Europe there are a number of problems associated with irredentism and ethnic conflict. For example, Romania does not know what to do with the local Hungarians, Croatia with the Serbs, Bulgaria with the Turks. Will the EU not repeat the fate of the Soviet Union? Could it be shaken by ethnic unrest and war, as it had happened in fourteen fraternal republics?

In modern crisis Europe, when the allied bodies have demonstrated their inconsistency, it has become useless to appeal to Brussels. And everyone understands this: the heads of European states, the opposition, and the people. All problems need to be solved on their own, internationalism and gratuitous help to someone is not in the spirit of a pragmatic Europe.

Therefore, in many countries, far-right parties are beginning to enjoy particular popularity. Under normal conditions, they gain no more than 5-10 percent of the vote, quietly seated in their seats in parliament and do not interfere with more serious uncles to do their work. But now, when the credibility of supporters of close European integration has been undermined, and the very idea of ​​a united Europe has lost its former attractiveness, voters are increasingly choosing to give their votes to those parties that are oriented toward building a powerful national state, and not those who want to turn the country into a powerless state The province of a huge empire with its capital in Brussels.

In addition, patriotism is the last refuge of a scoundrel. And European populists know about it. In order to get the cherished seats in the parliaments and cabinets of ministers, they are ready to go over to the side of the right, pulling their supporters and sponsors behind them.

And then, when the “patriots” came to power, it turned out that the nations are not so homogeneous as it may seem at first glance. Actually, the national state is the child of the industrial society. Nationalism is a very young ideology: for the first time, it was seriously spoken about only in the period of the revolutions of 1848-1849. National states in the Balkans appeared even later - in the 1861-1912 years, and in Central Europe in general in the 1918-1920 years. It turns out that many nations are incredibly young, and have not yet reached their maturity. This is evidenced, for example, by the separation of Czechoslovakia and the war in Yugoslavia: perhaps Czechoslovakia and Yugoslavs would become monolithic peoples, but, alas, this required too much time, and Prague and Belgrade did not have it.

And now the representatives of one of the people often speak different dialects, are at different stages of socio-economic development, living under different environmental conditions, practice several religions. Of course, industrialization and urbanization equalize everyone, but for this you need to change a few generations. In addition, in many parts of Europe industrialization is inappropriate: first of all, it concerns the northern territories and agricultural areas of the south.

At the same time, in poorly urbanized regions with a poorly developed economy, remnants of a pre-industrial society may persist. The brightest example is the south of Italy, where agriculture is a traditional type of economic activity. There are strong clans, reborn in the conditions of the modern state in the famous mafia. In the north, on the contrary, industry is developed and there are many large cities - melting pots for local and visiting Italians, who mix here, lose their attachment to their native places and loyalty to the traditions - in a word, “they civilize”. In the south, confusion does not occur, nothing violates the archaic way of life here.

Similar trends can also be observed in other regions covered by the idea of ​​separatism. But, of course, every case is unique, and each region must speak separately.

An important factor in the collapse of nations was the entry of many countries into the European Union: states delegated part of their sovereignty to an external organization. This means that Italy, France, Germany, Great Britain and other countries have transformed from full-fledged national states to ordinary regions inhabited by Italians, French, Germans, English, and ruled from the outside. By historical by the standards, many of these countries are very young, they are not yet 150 years old. Italy, Germany, Belgium, Spain, not fully matured, hastened to surrender to the hands of a supranational organization - the European Union, having lost their sovereignty and put an end to national construction. 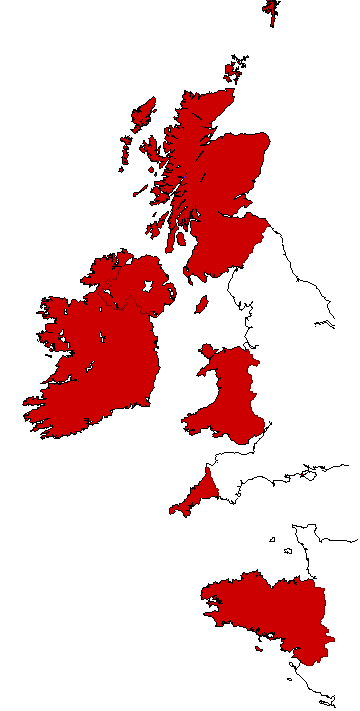 The final collapse of nations is only slowed down by the invasion of foreigners from the Middle East and Eastern Europe. Northern Italians would have quarreled with the South long ago, if they had not seen how they, together with their potential enemies, are very different from Arabs, Romanians and Turks. The external threat makes the northerners and southerners feel like a single, though not monolithic. The same applies to Germany, where each federal state, in fact, represents an independent state with its own traditions and peculiarities, France, where northerners and southerners traditionally bite each other, Belgium, Spain.

Great Britain is a separate question: the Scots, the Irish, the Welsh are ethnically far from the British, and there the actual question is not about the formation of a single nation of several subethnos, but about the national liberation struggle. Britain is just the remnant of a once mighty empire, and the nations enslaved by it want freedom.

It seems, 21 century marked the emergence of new Celtic countries in Western Europe. Ireland was able to achieve independence in the early last century, and now it was the turn of Scotland, Wales and Brittany. These four regions were conquered by the Anglo-Saxons as early as the Middle Ages, and are under the authority of the British and French about three or four centuries. Despite this, the locals managed to retain its identity, successfully resisting assimilation.

In the Celtic regions, a lull still prevails: in the 20 century, the strongest armed struggle of local separatist groups against London and Paris took place here. The Irish Republican Army and the Liberation Front of Brittany were best known for this struggle. But now the “hawks” have given way to the “pigeons”: the Celtic peoples realized that independence can be achieved peacefully, especially when the sovereignty of Great Britain and France is limited by the European Union, and the range of possibilities among the governments of both countries has sharply narrowed. A pioneer in this business is Scotland, where a referendum on secession from the UK will take place in 2016.

Spain has its own recalcitrant region - Catalonia. Scientists do not know who to consider the Catalans - a subethnos of the Spaniards or an independent people. But, in any case, Catalonia is on the verge of independence. The same can be said about Italians: there are such Italian dialects that they can be recognized as separate languages. The millennial division of the peninsula into many small states has certainly contributed to the formation of different communities in every corner of the region, and the country created by Garibaldi is, in fact, artificial.

In northern Spain acts Basque separatist group ETA. The Basques, like the Celts, in fact, conquered by foreigners. If the Catalans can still be seen as a people, ethnically close to the Spaniards, the Basques in Spain are completely alien. Their language has nothing to do with Romance languages.

If, nevertheless, separatists in Western Europe succeed in achieving independence, the problem will appear: what to do with the new states? Take them into the European Union and NATO? On the one hand, in the young countries laws that are generally accepted for the EU will already be in force, on the other hand, the former metropolises will not want the separatist regions to be included in the union. And it's not a fact that the Catalans, the Scots and other nations will want to be friends with a depressed and crisis-ridden Europe.

In addition, the attainment of independence by some regions will lead to a strong weakening of the metropolises. For example, the UK turned into a secondary state, as recently warned George Robertson, former Secretary General of NATO. It is curious that the UK is a nuclear base in Scotland. It turns out that in the case of an independent Scotland in the world will have another nuclear state, just as it did in the case of Ukraine, Belarus and Kazakhstan?