Sochi: games of politicians and psychiatrists?

January 29 2014
105
The fact that the Olympics, yes, in principle, and any other major sporting events, has recently become more and more overgrown with political and other provocative “fatty” is no secret to anyone. Organizers and organizers of sports festivals in different countries of the world often encounter provocations of especially zealous citizens who turn sports competitions into a kind of improvised platform for expressing their point of view on a particular issue, which often has nothing to do with sports. And the point of view can express not only verbally and far not only, let's say, censored. Another “half-time”, when provocations are arranged, as they say, in the near-sports environment: some pretty drunk before a match a fan jumps out onto a football field and runs to embrace the goalkeeper, or the girl will certainly from the human rights organization with his bare breasts (well, or where must be female breasts) protests against the "barbaric content of aquarium catfish in captivity."


It is much worse when the athletes themselves are doing something similar, reinterpreting the sport into something informal, politicized, inadequate. This behavior can be called unsportsmanlike, and you can - and obviously provocative, aimed at solving a problem that most often has nothing to do with Olympic, and sporting in general, ideals.

But after all of the above, a question arises: has it only recently been that sport has often been deliberately “confused” with politics or “show behind glass”? Very provocative antics of athletes and not only athletes in large sports competitions, unfortunately, have manifested themselves for decades. Somewhere with this they tried to fight, somewhere they indulged.

At one time, among the athletes of those states that now call themselves “strongholds of world democracy,” the “fashion” showed itself not to stand on a pedestal if dark-skinned athletes are awarded on this pedestal together with them. Especially in those cases when an athlete, for example, from an African state found himself on the top step of a pedestal.

In the late 60s, Swedish athletes allowed themselves not to go to the traditional post-match handshake ceremony. Czechoslovak players in 1968 deliberately fell on the ice, putting their ear to it to listen to "are the Russians coming Tanks"... At the Olympics in Melbourne, the Hungarian water polo team, bringing the policy associated with the deployment of Soviet troops to Budapest at the water stadium, reduced the match to a real bloody battle. Hungarians sympathetic fans began to chant overt anti-Soviet slogans, spit in the direction of Soviet athletes, freely approaching the pool. The match was stopped ahead of schedule on the score 4-0 in favor of the Hungarian national team, having counted the defeat of the USSR national team ...

It is possible, of course, to reduce the conversation to the fact that the USSR “is to blame” - he escalated the situation with his actions in Budapest or Prague, but only such a conversation is “in favor of the poor”. What about sportsmen here? And what was the “arbitration” role of international sports officials, the IOC?

Now we can say that all this in stories? Yes, there it was. There is today politics, and the banal rudeness, the absence of any sports dignity. Just last week, the Dutch speed skater Shipke Knegt, losing to a Russian athlete in a short track competition, who, notably, in a few days will go to the Olympics in Sochi, rewarded the Russian with figures from the middle fingers of both hands and an improvised kick at the finish. Despite the fact that Knegt later apologized, the incident, as they say, was remembered. Here, sports functionaries worked, depriving the "democratic" Dutchman of the tournament medals. It can be assumed that Mr. Knegt is now preparing for Sochi with double zeal to throw out another trick, aiming for cheap near-sports popularity. 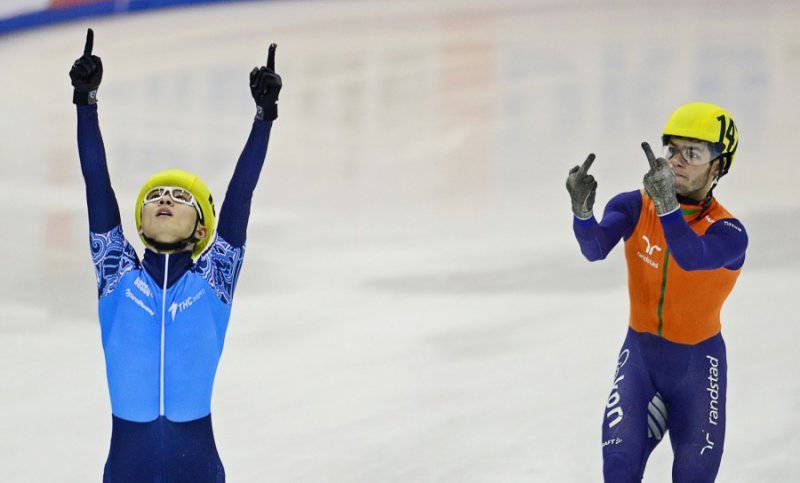 Ukrainian biathletes, having won the baton in Austria, decided to celebrate with shouts “For the Maidan!”, Taking the podium ...

In this regard, the recent speech by the head of the International Olympic Committee (IOC), Thomas Bach, who replaced less than half a year ago in this post, Jacques Rogge, looks very timely. Thomas Bach, who himself was a wonderful athlete in the past (Olympic champion 1976 of the year and world champion of 1977 of the year in fencing, team of Germany), speaking at the IOC meeting, said that if athletes begin to turn the Olympics into a political act, they will face serious punishment up to disqualification and loss of awards. The head of the IOC warned members of sports delegations that they can express their views on an event of a sporting or unsportsmanlike nature at press conferences, but not during competitions and not while they are, for example, on a pedestal of honor. The IOC emphasized that for engaging in political, religious or other propaganda (in the form of shouts, posters, provocative inscriptions) that are not related to sports, during, for example, the award ceremony sanctions will be applied at the IOC level. Recall that recently the IOC also has an “ethical standard”, according to which the committee is ready to seriously punish athletes for insulting rivals, fans, national symbols of other states. The skater Knegt mentioned has already fallen under this regulation. At the same time, the NOC of the Netherlands reported that the issue of Knegt’s removal from participation in the 2014 Olympics was also being considered, but his “apology and remorse” allowed the Olympic Committee to meet the athlete.

Of course, at the Sochi Olympics, one can expect all sorts of provocations from those individuals who are used to mixing sport with politics, and politics with obscenity. There will definitely be someone who is ready to look through glasses with politic diopters for any sporting event in Russia (and not only in Russia) ... Well, the mentally impaired was enough at all times ... The main thing is that the Olympics should not turn into a bravura march of politicized and mental impairment .